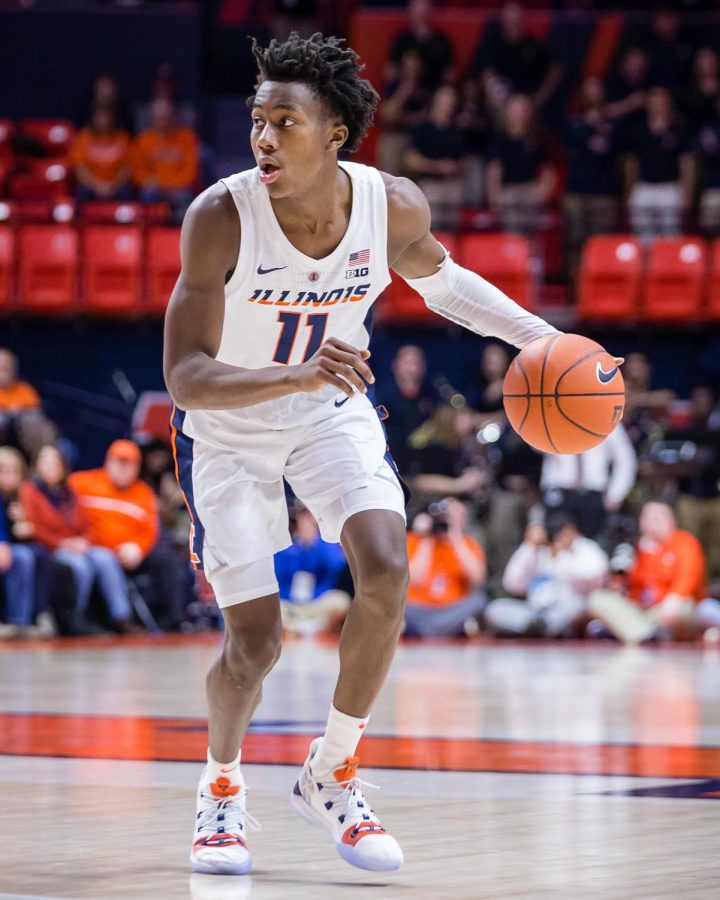 Illinois guard Ayo Dosunmu dribbles the ball during the game against UNLV at State Farm Center on Saturday.

For a long time, Illinois basketball was defined by greatness. It consistently competed in the Big Ten and made the postseason, putting together a team that threatened for a deep run.

Recently, the program has run into something of a dry spell, and what a let down it’s been. For the first time in school history, the Illini haven’t participated in an NCAA tournament in five consecutive years. A record drought that stretches back into the John Groce era.

The Illini have been in a slump on the hardwood, and there are a lot of theories as to how they got there. The answer may be obvious; Illinois went away from what they were best at.

All the best Illinois teams have been marked with stellar guard play. Look no further than probably the best team in school history: the 2005 squad. The reason the team had success was because its identity was based around its three-headed backcourt. The team’s problem at the position only became more and more evident, as the game of basketball evolved to become more perimeter focused and guard-heavy.

While this year’s edition of Illinois men’s basketball may not be the one to finally break the drought, head coach Brad Underwood has finally gone back to what made Illinois into a high caliber Big Ten program.

While Trent Frazier, Ayo Dosunmu and Andres Feliz may not have the national notoriety Dee Brown, Deron Williams and Luther Head had, they represent a step back in the right direction.

An electrifying blur in transition and a microwave in the half court. Due to his flashy play and crowd favorite status, Frazier will more or less be the face of any Illini resurgence if one is to come in the next two years. Frazier currently leads the Illini at a little over 14 points per game, despite missing a game with a concussion and playing on a likely bruised tailbone against University of Nevada, Las Vegas.

The blue chip do it all combo guard with the best NBA future. Underwood has praised the freshman’s versatility and how much he impacts the game. Dosunmu has led the Illini in rebounding and assists in multiple games while also showing off a capable offensive game, coming in second on the team in points, assists and rebounds per game.

While Feliz may not match the stature or even the scoring of Head at just six feet tall and averaging just eight points per game, he does match Head’s ability to hound ball handlers and provides a quiet confidence and leadership that showed in a 19 point performance in Illinois’ last win against UNLV.

While it’s one thing to assemble players who can be thrown into comparisons by any idiot with a column, it’s another thing to create a culture and a system that allows all these different point guard type players to coexist with just one ball. Underwood deserves props for the fact that, despite the early season woes for the Illini, there hasn’t been a peep from anyone about any kind of discontent between any of the team’s point guards. With both Underwood’s aggressive, defensive style and high pace, each of the guards has ample opportunity to get the ball and push, allowing the others to fill the lanes.

Underwood has gone to the three guards to start multiple games this year, however, Feliz is best used off the bench, as without him there, the bench tends to struggle with sustainable scoring.

Having a position where you go three deep is a luxury not many college teams have. However, for as long as Underwood is at Illinois (and whoever comes next), guard play needs to be king.