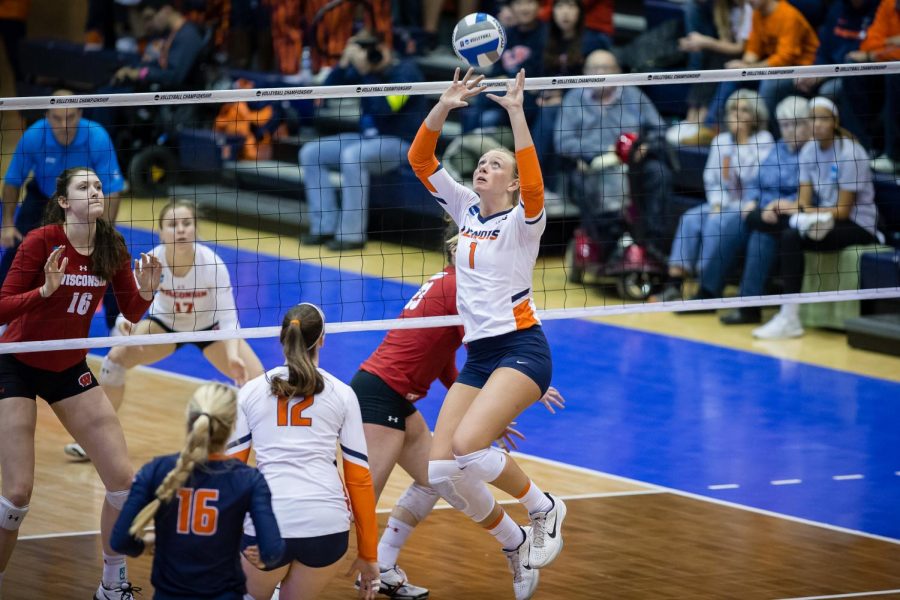 Illinois setter Jordyn Poulter sets the ball during the match against Wisconsin in the Elite Eight of the NCAA tournament at Huff Hall on Saturday. The Illini won 3-1.

Whether the Illinois volleyball team likes it or not, this weekend marks the end of the road for their storybook season. With very few expecting them to challenge for a Big Ten title, they put together one of the best seasons any team in Champaign has had in years, riding a second-place Big Ten finish into the third overall seed in the NCAA tournament.

Even some of the Illini cannot believe how far they’ve come.

“If you told me even at the beginning of the season we’d be here I wouldn’t believe you all the way,” said senior setter Jordyn Poulter. “The work we put in this season has reflected where we are now.”

Now in the Final Four, what awaits them is a team the Illini know all too well: Nebraska.

The Cornhuskers handed the Illini their first loss of the season in Huff Hall on Sept. 29, part of a series of losses in the middle of the schedule the Illini players said was a key turning point in their season. After those losses, Illinois went on a now-17-game win streak through the rest of its schedule highlighted by revenge wins at Nebraska and Wisconsin, as well as a win against Penn State in Huff Hall.

On top of the on-court meetings, Illinois’ head coach Chris Tamas’ last job before coming to Champaign was as an assistant in Lincoln.

“We know each other’s tendencies pretty well,” Poulter said. “Whoever adjusts quicker will be the victor in the match.”

While the opponent may be familiar, the venue is not. The weekend marks the end of the extended senior days Ali Bastianelli and Poulter got, as the Illini’s strong regular season earned them a hosting spot for the first four rounds. Illinois traveled the day before their game and have an open practice to prepare for playing in the Target Center in Minneapolis.

The passing game will need to be there for the Illini. So far, the Illini offense has been as lethal as it’s been varied, with contributions from different sources. Jacqueline Quade takes the number one spot, reaching double-digit kills in each of the Illini’s last three postseason wins, including 25 kills against Wisconsin in the Elite Eight. It doesn’t stop there, as Poulter can turn to Bastianelli and Ashlyn Fleming in the middle or Megan Cooney on the right side, as well as Beth Prince when Quade moves to the back row.

Unlike Nebraska, who has appeared in each of the last four Final Fours, Illinois is in uncharted territory for its last weekend.

“It’s kinda new territory for all of us, but so was the Elite Eight,” Poulter said. “We maintained our composure there.”

Tamas said the Illini just need to enjoy the moment.

And for Bastianelli, it’s the best possible ending.

“This is what we worked for all four years before it was just a goal, but now it’s here,” Bastianelli said. “There’s no other word besides amazing.”