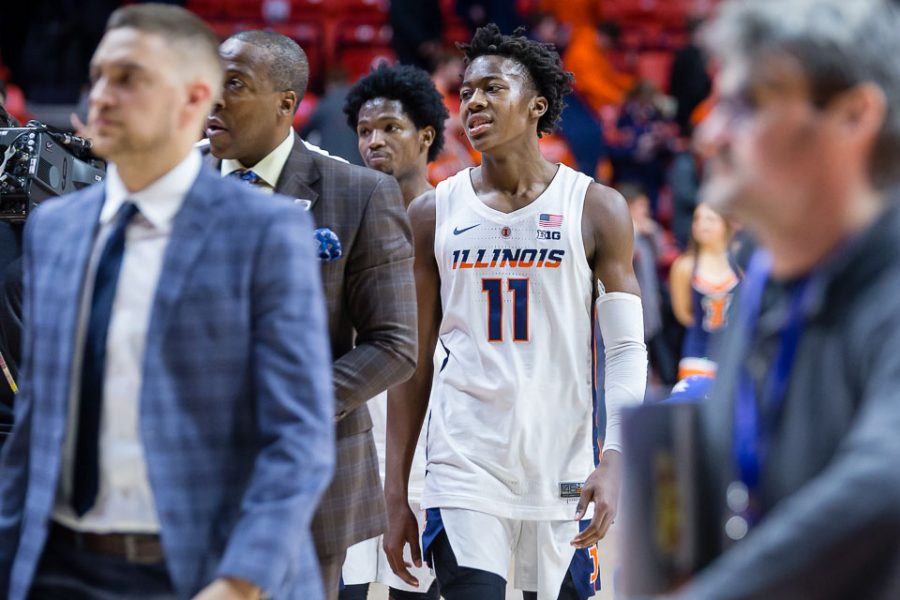 Illinois guard Ayo Dosunmu (11) walks off the court after the game against Georgetown at State Farm Center on Tuesday, Nov. 13, 2018.

It took a last-second three from freshman Ayo Dosunmu to get Illinois (4-9, 0-2 Big Ten) to overtime against Florida Atlantic (9-4) on Saturday at the State Farm Center.

But after five more minutes of basketball and several opportunities to pull away, the Illini found themselves down 73-71 with the ball as the clock wound down.

Sophomore guard Da’Monte Williams missed an open look from beyond the arc and Dosunmu heaved another desperate three but neither could save Illinois from one of the program’s worst losses in recent memory.

Florida Atlantic came into the game without its leading scorer and rebounder Jailyn Ingram (18.9 points and 8.2 rebounds per game) after he tore his ACL just before Christmas.

Ranked No. 214 by Kenpom coming into the game, Florida Atlantic is the lowest-rated team to beat Illinois since No. 254 Illinois-Chicago did so at the United Center in 2011.

On Friday, head coach Brad Underwood said Illinois’ start to the year merited a B or B- grade.

What grade do you give the #Illini 12 games into the season? Head coach Brad Underwood weighs in… pic.twitter.com/unxf71IBTI

About 24 hours later, the second-year coach’s assessment began to be questioned online.

Illinois struggled to establish any offensive rhythm at any point, shooting a season-low 32 percent from the field and going 11-of-20 on layups.

After scoring 28 points in a loss to Missouri a week ago, sophomore Trent Frazier struggled to score on a 2-of-9 shooting (1-of-5 3FG) night and finished the game with nine points.

After Illinois forced a shot clock violation while up 71-70 with 52 seconds left in overtime, Frazier turned the ball over with 34 seconds left, then missed two crucial free throws after drawing an offensive foul five seconds after.

Dosunmu put up 21 points to go with eight rebounds. Senior guard Aaron Jordan added 20 points, scoring 12 in the second half, but it wasn’t enough to overcome the rest of the team’s offensive woes.

Forward Giorgi Bezhanishvili went 3-for-8 from the field, sinking a first-half three, before fouling out with 6:34 to go in regulation. He brought in three rebounds and turned the ball over three times in just 15 minutes on the court.

Redshirt-junior Kipper Nichols continued recent struggles, fouling out after 28 minutes on the court with four points on 2-of-9 shooting, though he hauled in eight rebounds.

Illinois was a 13.5-point favorite headed into the game, and the loss ends non-conference play without a single Power Five win.

With a minute to go in regulation, it looked like Illinois was through.

But Frazier made a three-pointer and the ensuing free throw after being fouled to set up Dosunmu’s game-tying three-point shot to cover the late deficit.

Still, the Illini failed to sustain momentum, and only added one field goal — a Jordan three to cut it to a 70-68 FAU lead — in the overtime period.

The Illini only scored 10 bench points, nine of which came from junior guard Andres Feliz, who scored nine on 4-of-10 shooting.

To add to the team’s scoring troubles, the Owls easily out-rebounded the Illini, 51-38, though they turned the ball over 23 times.

The loss marks Illinois’ fifth in its last seven games, and the team is set to travel to Indiana (No. 24 in Kenpom) and Northwestern (No. 48) to continue Big Ten play next week.