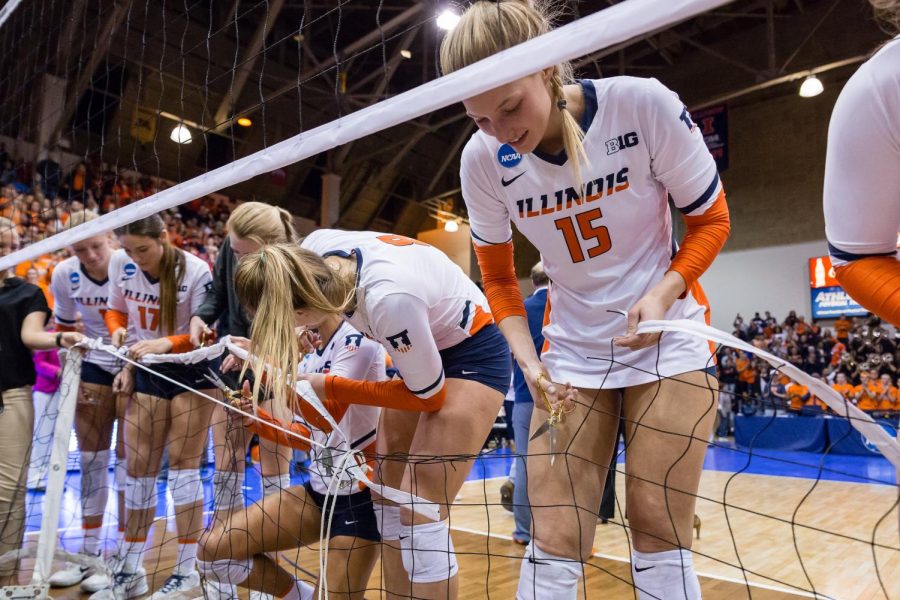 Illinois outside hitter Megan Cooney (15) and outside hitter Beth Prince (8) cut the net after the match against Wisconsin Saturday. The Illini will participate in the Final Four in Minneapolis, Minnesota, this week.

10. Dudek out for the season

The 2018 Illinois football season started on a roughly played note.

Rumors about suspensions looming over some the team’s top players during training camp came to fruition Saturday, Sept. 7, when an Illinois spokesman handed out pink paper sheets to the media during Illinois first home game against Kent State.

Nonetheless, a positive for the Illini was the long-awaited full-health of senior wide receiver Mike Dudek. During training camp, the same positive energy that shined during his historic freshman season was on full display. However, only one game into his comeback season, the player ran into another injury-hurdle.

In the Monday press conference that followed the Saturday game, head coach Lovie Smith took the lectern to announce Dudek’s season would be coming to an end.

Even the media let out a gasp.

Josh Whitman hasn’t taken a breath since becoming the Illinois Athletic Director in 2016. From a long-stretch of hires to a strong push to complete the football program’s new training facility, Whitman has been one busy AD.

Announcements to improve the Ubben Basketball Facility by doubling the current space with a 30 million dollar renovation were made over the summer. The athletic department is also moving forward on a new indoor facility for the baseball program, on top of the already progressing revamp of the soccer and track and field space.

Tied for the worst loss in Illinois history, the abysmal 63-0 loss to Iowa was a performance that showed the aggressively ugly-side of a collegiate football rebuild.

Only two weeks after a promising 55-31 win over Minnesota at home, Illinois fan’s were shown that Illinois football is still far from, convincingly, competing in the Big Ten. After the game, Twitter was full of angry Illini faithful, some of which called for a change at head coach.

Every rebuild has its trying periods, and at the end of the season, Whitman showed the nation that he was doubling down on his head coach, handing Smith a two-year extension.

7. Soccer back on track

Illinois soccer had its fair share of struggles over the recent past. Head coach Janet Rayfield and company racked up only 11 wins over the team’s previous two seasons but managed to match that number in 2018 alone. In addition, the team was good enough to reach its first Big Ten tournament since 2015.

The regular season saw success against some major opponents, with wins over, at the time, No. 3-ranked Duke and No.14-ranked Oklahoma State. Rayfield mentioned that the season saw numerous changes to the day-to-day structure of the team, but the addition of some key freshman may have been the real x-factor.

Freshman Makena Silber played in all 20 matches for Illinois and earned 17 starts on the season. She also led the team in shots with 46 and was second the team in shots on goal with 20. The freshman also was tied for second in goals with five.

Illinois basketball had one thing going for it in 2018, and his name was Trent Frazier.

Coming into the program with little expectation, the guard really broke out during 2018 Big Ten play. For Brad Underwood, the year has been one to forget, going only 4-16 in Big Ten play over his first two seasons. However, Frazier quickly rose to become one of the most dynamic shooters in the Big Ten, leading conference freshman in scoring, assists, three-pointers and steals.

Getting it done across the board during his freshman year, as the 2018-2019 season quickly approached, all eyes were on him with the program’s hardest nonconference slate set to tip off the season.

Illinois headed to Maui for the annual invitational event and took on Gonzaga in the first round. In what many expected to be a blowout, Illinois hung around and Trent Frazier was looking to call an upset in the second half.

The now-sophomore went off for a pretty remarkable 27 points in the second frame. Big shot after big shot continued to fall through, and Illinois found itself within just two-points of one of the top teams in the country with less than a minute to go.

Illinois women’s golf had its best season in program history.

The team earned a top-25 ranking, becoming the No. 20 team in the country with a chance to compete for an NCAA Championship. In the NCAA regionals, Illinois finished in seventh place, only one spot away from qualifying for the Championship round.

Head coach Renee Sloane told FightingIllini.com that the season would lay the foundation for years to come. Well, the team is already proving that to be true, with a strong start in their 2018-2019 season. The women’s golf team has already picked up first-place finishes at the Coeur D’Alene Resort Collegiate, Cardinal Cup and Trinity Forest Invitational.

It would be an understatement to claim Illinois fans haven’t watched the best football over the past handful of years.

With the hiring of Lovie Smith in 2016, it finally looked like the tides were changing. However, fans that were once sporting Lovie t-shirts sold around campus were quickly beginning to question whether or not he was the right fit. After an underwhelming two seasons where Smith led a team that won only five total games, the coach needed a spark.

The commitment of both Marquez Beason and Isaiah Williams in 2018 lit a recruiting flame. The decision to rep the orange and blue looks to be instrumental in helping shape one of the best incoming classes in Illini history.

Not to mention, locking down both players proved the recruiting ability of Smith and his hired coaching staff. The commitments demonstrated that, for the first time in quite some time, light may be at the end of the tunnel.

3. Men’s gymnastics and Diab winning on the rings

Possibly one of the most dominant Illinois athletes over the past several years has been senior male gymnast Alex Diab.

A top competitor on the rings over the last several years, Diab finally solidified himself as number one in the nation after taking home the individual NCAA still rings title. In the same year, Diab went on to earn a silver medal at the U.S. Gymnastics Championships in the same event.

The gymnast is a four-time NCAA All-American and is the only Illini to be a three-time still rings Big Ten Champion. Diab is also second in school history with 20 career rings titles.

The accomplishment makes for one cool story, as while the national title was the first for Diab, it wasn’t the first in his family. Diab’s father, Mark, won two national championships on the still rings during his time at Iowa State.

Diab’s victory may have been the biggest win of the men’s gymnastics season, but the team also managed to earn a No. 2-ranking in the country and ended up finishing third in the country after a tough-fought battle in the NCAA championships.

Illinois first baseman Bren Spillane put on one of the best shows of 2018.

Once the season began, Spillane quickly caught the attention of the college baseball world and, soon after, the professional baseball world.

Putting up some of the top numbers ever done by an Illini, Spillane earned the National Player of the Year title, the first in program history and only the fourth-ever in Big Ten history.

Spillane earned the Big Ten triple crown, hitting .407 on the year with 23 home runs and 57 RBI’s. His home run number put him at second-place on the Illini’s single-season list, and he finished his career with a .723 slugging, which is the best in Illinois history.

In all honesty, the numbers go on and on. Spillane put up one of the best seasons this campus has seen in quite some time across nearly any sport. And to top it all off, he became the highest drafted position player in Illinois baseball history at No. 82 overall by the Cincinnati Reds organization.

If you happen to be unaware of what the Illinois volleyball team did in 2018, I recommend to educate yourself on the topic.

Easily the top story of the year, Illinois volleyball became the No. 3 team in the country and found themselves in the NCAA Tournament with a No. 1 seed.

Starting off the season strong, Illinois dominated its nonconference opponents and then continued to pick up wins over its first several Big Ten opponents. A bump in the road came when Illinois faced defending national champion Nebraska at home in what would be the team’s first loss of the season. A rough stretch followed, where the team dropped its next match against Wisconsin and two games later a match against Minnesota.

However, it didn’t take long for the Illini to get back on track and avenge two of the three losses. The Illini beat both Nebraska and Wisconsin on the road in what would end up being a 17-game win streak that brought them all the way to the Final Four.

Coming practically full circle, Illinois’ winning streak finally came to an end against Nebraska in a thrilling five-set match at the Target Center in Minneapolis.

The Illini were led in storybook fashion by Ali Bastianelli and Jordyn Poulter in their final seasons with the team.

The trip was only the fourth-ever Final Four berth for the program.