Parker strong as Illini take down Spartans but fall to Wolverines 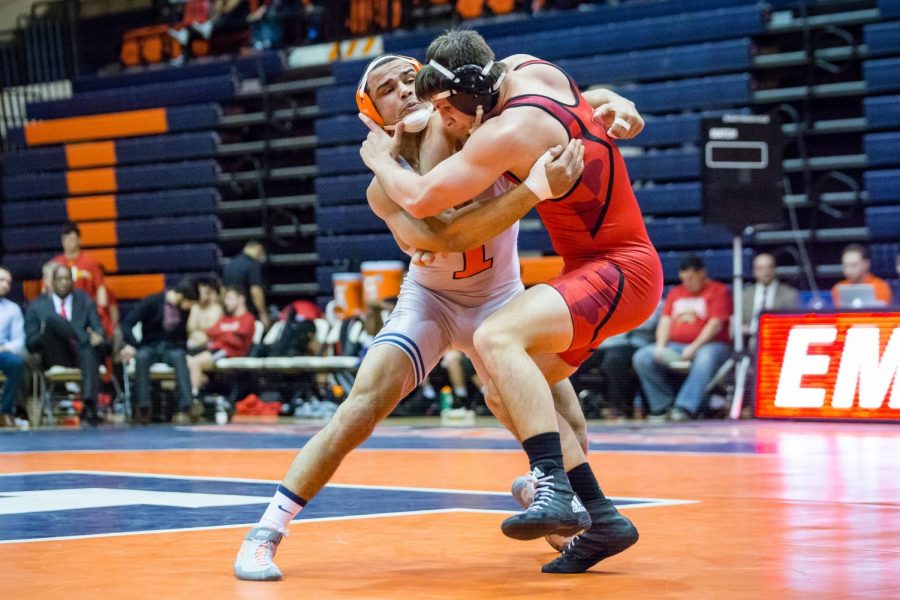 Illinois’ Emery Parker wrestles with Maryland’s Niko Capello in the 184-pound weight class during the meet at Huff Hall on Jan. 28. The Illini won 25-18.

The No. 14-ranked Illinois wrestling team is in the thick of Big Ten play.

The Illini started conference competition on Friday with an 18-15 win against the Michigan State Spartans. The Illini picked up six wins and four losses against the Spartans, ending with an overtime victory to win in the last match of the day.

“We got a really slow start and looked really lethargic,” said head coach Jim Heffernan. “Duncan, Carr and Kanzler did a really good job changing the momentum (and) also a huge win for Nick Gasbarro.”

Dylan Duncan picked up the first win for Illinois after he beat Anthony Tutolo in a 7-5 decision giving, the Illini three points overall. Illinois got into a groove, and strung together four-straight victories by decision and gained the lead 15-12 over Michigan State.

In the ninth match of the night, 174-pound redshirt junior Carver James couldn’t give the Illini the advantage and dropped the final match 4-2 to tie the overall score at 15 apiece, setting up a winner take all showdown.

For the Illini, the timing was just right, with No. 2-ranked senior Emery Parker set to battle next against No. 20-ranked Cameron Caffey.

Caffey scored first in the second period with an escape, making his lead 1-0. In the third period, Parker picked up a takedown with a minute left to score two points and increase his lead to 3-1. Caffey then picked up an escape and a takedown to go ahead 4-3.

Once again, with 15 seconds left on the clock, Parker picked up a takedown to win the match 6-4, giving Illinois its first conference win of the year, 18-15, pushing its record to 2-1 on the season.

“I tried not to think too much about the team aspect because I didn’t want to add pressure,” Parker said. “However, as a senior I’ve been put in these situations before so I wasn’t too uncomfortable. At the end of the day I have to wrestle to my best ability at that point in the time, regardless of the situation.”

After Michigan State, Illinois traveled to Ann Arbor to compete against Michigan, trying to build on its first conference victory.

The Illini scored first when Piotrowski won the first match of night by a 3-2 decision over Drew Martin, giving the Illini the lead 3-0. In the next match, Duncan lost to No. 3 Stevan Micic 18-8 , and the Wolverines led 4-3.

In another ranked match, No. 5-ranked 141-pound redshirt sophomore Mike Carr took down No. 6-ranked Kanen Storr, restoring the overall lead for Illinois 6-4.

The Illini dropped their next four matches, including two matches against ranked opponents. No. 12-ranked Eric Barone dropped his match against No. 14-ranked Alec Pantaleo in a 10-3 decision.

In the 174-pound match, James dropped his match against No. 3 Myles Amine by a 12-3 decision. This made the overall score 18-6 in favor of Michigan.

In the next match, Parker won a 15-4 decision against J.T. Correll, extending his win streak to nine and his overall record to 9-0 this season.

“For some reason, I’ve always been a slow starter,” Parker said.  “I tend to make a good amount of progress and peak toward the end of the season. So at this point, I try to be very critical, even with the wins, so I can continue to improve.”

After that match, the Illini failed to pick up any more wins on the day, dropping their next two. This loss made the Illini 2-2 overall and 1-1 in the Big Ten.

Illinois will compete against Minnesota at Huff Hall in its first home meet since its season opener against Missouri. This starts the stretch of conference meets that will continue through February.

“Personally, I think (Big Ten competition) is the most exciting part of the season,” Parker said. “These are the matches that set you up for Big Tens and Nationals, in terms of seeds. This is also the best conference in the country so we’re wrestling some really good teams and individuals consistently.”