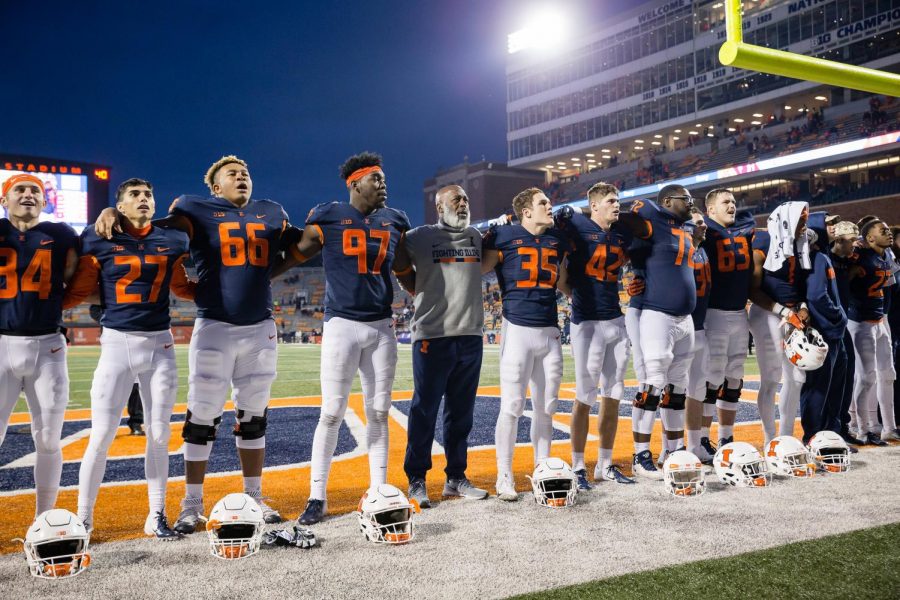 Illinois head coach Lovie Smith sings “Hail to the Orange” with his team after the game against Minnesota at Memorial Stadium on Nov. 3. The Illini won 55-31.

With recruiting season in full swing, head coach Lovie Smith is doing all he can to improve his roster. The Illini have been heavily involved in both recruiting transfer players as well as high school prospects, and the program went on a hot streak as the New Year began.

With joint-leading tackler Del’Shawn Phillips set to graduate, the program was looking to land a replacement to complement rising junior Jake Hanson in its 2019 linebacking corps.

Smith found just that with a commitment from 2019 four-star linebacker Shammond Cooper.

Cooper announced his commitment to the Illini live on ESPN2 at the Under Armour All-American game on Jan. 3, where he was selected to participate among other premier prospects in the class of 2019.

Hailing from St. Louis, Missouri, the 6-foot-2-inch Cooper was the latest recruit from the area to join the program, following in the footsteps of fellow 2019 Under Armour All-American athlete Isaiah Williams and University of Miami transfer wide receiver Jeff Thomas, a former All-American as well.

“I’ve been trying to get him this whole time,” Williams said per 247sports. “He’s a key piece, and hopefully he chooses Illinois.”

While landing Cooper was a positive step for a defense that surrendered over 500 yards per game on average in 2018, finding a coach to coordinate that defense in 2019 appears next on the list. With Hardy Nickerson resigning following the 63-33 loss at Maryland on Oct. 27, Smith had stepped in as the de facto defensive coordinator on an interim basis to close out the season.

The additions did not stop there, as Smith again picked up another major piece, this time on the offensive side of the ball in the transfer market.

Georgia freshman tight end Luke Ford from Carterville, Illinois, announced via Twitter on Jan. 4 that he is transferring to Illinois to be closer to family.

Ford finished his freshman season at Georgia with a single four-yard catch in its opener against Austin Peay but did appear in nine games total. His lack of production may have stemmed from being stuck behind Isaac Nauta, a former five-star recruit who put up 430 yards receiving and four touchdowns for the Bulldogs this fall.

Whether or not Ford was going to leave Athens was unclear until his announcement. He was unsure of how things would play out as recently as postgame interviews after the Sugar Bowl on New Year’s Day.

“I could for sure see myself staying,” Ford said in an interview with 247sports.com. “I’ve got to talk to the coaches. There’s no doubt in my mind I could do that. Then there’s also the reason: for family, to go home. With my grandpa getting more and more sick, I want him to see a couple of games. It’s hard for him to make a 10-hour drive or flight or something like that. I want my family members to come to all my games.”

Ford’s eligibility for the 2019 season will depend on if he seeks the NCAA family hardship waiver and whether or not that waiver ends up passing.

Miller registered 236 yards receiving and four touchdowns in his time at Oklahoma, including a touchdown reception in a highly anticipated non-conference game against Ohio State in 2016. In 2018, Miller started the season strong, with touchdown catches in each of the Sooners’ first two games, but did not register a catch in their final six games.

Miller played behind the highly touted talents of CeeDee Lamb and Marquise “Hollywood” Brown in 2018. In 2019, he would have competed for playing with Lamb and a trio of four and five-star freshmen, including Jadon Haselwood, the top-ranked receiver in the 2019 class.

Miller was a three-star recruit in 2014 out of Bishop Dunne High School in Dallas, Texas, and he committed to Illinois during Tim Beckman’s time tenure but eventually backed off that pledge. With the graduation of Sam Mays, Illinois was lacking a taller wide receiver with the ability to make catches in the air, but adding the 6-foot-3-inch Miller may just address that need for the 2019 season.

Miller’s two touchdown grabs in 2018 showcased his ability to use his height and create separation from smaller cornerbacks when matched up one-on-one. His enhanced catch radius could create a bigger window for Illini quarterbacks to fit the ball into, as incompletions were an issue for the offense in 2018.

For Illinois, the first seven days in January brought three impact players into the program that could be a sign of things to come as the race to national signing day heats up.