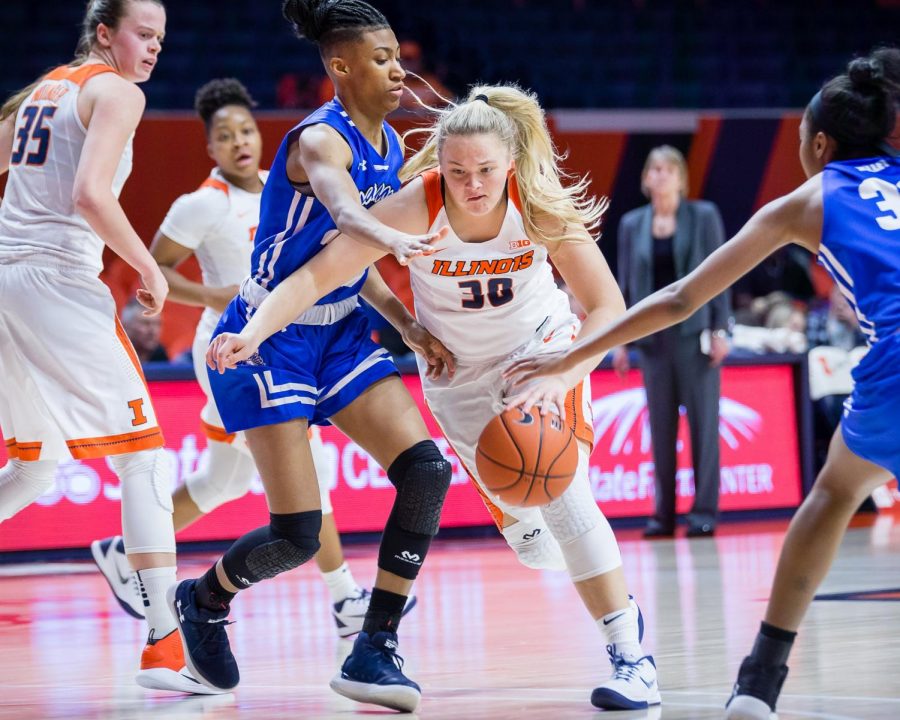 The Illinois women’s basketball team started with a 9-4 record last season before heading into Big Ten play, where the team failed to get a single conference win, finishing 9-22.

This season, the Illini began their conference season at 8-3; while the Big Ten schedule started out rough with two-straight losses, head coach Nancy Fahey finally got her first conference win at the helm of the Illini program.

Illinois pulled off the 66-62 upset on the road against No. 12 Minnesota just six days into the new year. The win came after two-straight Big Ten losses against No. 25 Indiana and Northwestern.

Illinois’ comeback victory was led by junior Brandi Beasley with the help of senior Alex Wittinger and junior Courtney Joens, all three scoring in the double digits.

Beasley was the main contributor on both sides of the floor, recording 18 points and a career-high five steals while adding six assists. Wittinger also put on a strong show on both ends, putting up 11 points and a season-high six blocks.

Joens recorded 10 points, six of them coming from consecutive three-pointers late in the first quarter.

However, the next 10 minutes was all Minnesota, as the Golden Gophers went on a 16-0 run just two minutes into the second quarter. Illinois’ scoring drought lasted for six minutes and was held to just eight points in the period, going into the second half down 14.

Illinois came out of the break on an offensive burst, using a 14-2 run to cut Minnesota’s lead down to 10 at the end of the third quarter. Junior Ali Andrews fueled the run, recording seven points during the quarter.

Heading into the final quarter, the Illini allowed just one basket by the Gophers before going on a 7-0 run, led by Beasley’s back-to-back jumpers. Following Minnesota’s scoring drought, the teams began to trade the lead throughout the final minutes.

With less than two minutes left, Beasley gave Illinois a one-point lead after landing a jump shot. The junior helped secure the win in the final 20 seconds with a mid-jump pass to freshman Arieal Scott, who hit the game-winning corner three.

Jumping off the bench following Scott’s three-pointer, the entire team was excited, but Fahey believes it meant a little more to Wittinger, a Minnesota-native.

“The whole team was so excited but obviously (Wittinger) being in her senior year, from Minnesota, I was so happy for her in the locker room, I got the biggest hug from her,” Fahey said.

Securing their first conference win since March 2017, Fahey believes the victory has been a work in progress.

“(This win) means we’ve got the next game up,” Fahey said. “It means that there is confidence. I told them before the game, ‘You can beat anyone when you stay focused,’ and I made them say it. That’s the attitude we have to have, and that’s what they came out with today, especially in the second half.”

Following their conference win on the road, Illinois returned to the State Farm Center on Jan. 9, where Rutgers handed Illinois its third Big Ten loss.

Illinois went into the contest confident, but Rutgers showed up just as ready and created a massive 23-0 run in the first quarter to put the team up 28-11 going into the second. Illinois held Rutgers to just 16 second-quarter points but was still behind 44-29 going into halftime.

The Illini continued their fight in the second half, outscoring the Scarlet Knights 31-27. But their comeback effort fell short, ultimately falling 71-60.

Continuing their search for a second conference win, Illinois traveled to Penn State on Saturday after a short two-day break, but the Illini tallied their fourth conference loss after being outscored most of the game, losing 62-48 to the Nittany Lions.

Illinois was strong out of the gates, outscoring Penn State 17-10 in the first quarter, but after being held to eight second-quarter points the Illini played from behind the rest of the contest.