Dosunmu shines against Michigan as team focuses on growth 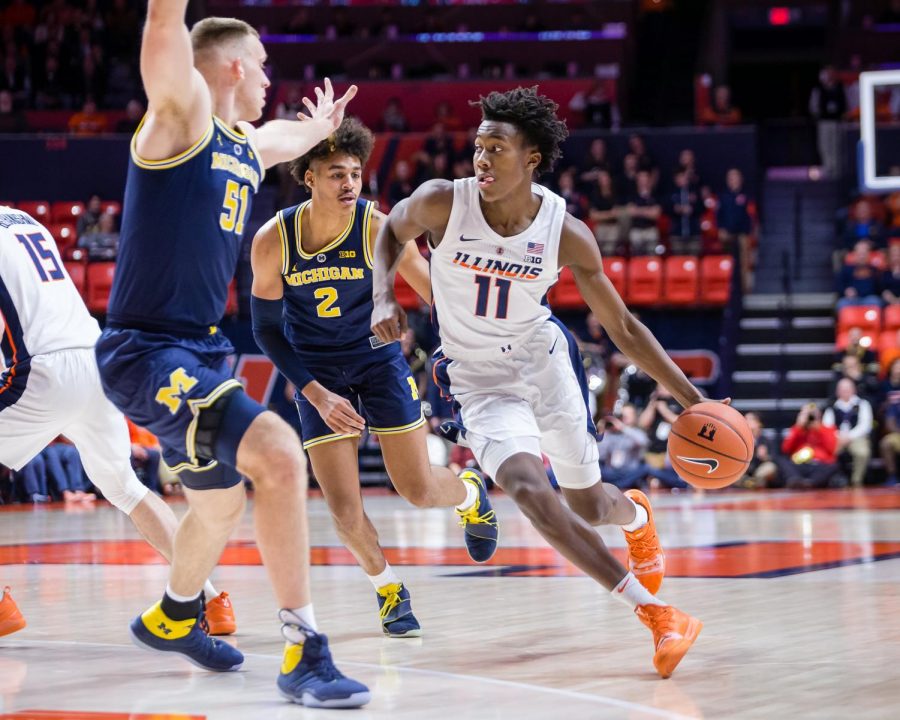 Illinois may have battled the best, but it couldn’t beat the best.

Despite an aggressive offensive performance by freshman guard Ayo Dosunmu, the Illini extended their five-game losing streak after the No. 2-ranked Michigan Wolverines outplayed them 79-69 at home. Illinois moves to 4-12 overall and 0-5 in the Big Ten, while Michigan continues its historic 16-0 with a 5-0 conference record.

Michigan might be ranked as the second-best team in the nation, but for Dosunmu and his teammates, it was just another routine contest.

“I feel like it’s the Big Ten, and their record doesn’t mean that much because each and every night we play against a good team,” Dosunmu said. “It was fun, but the ranking didn’t mean anything.”

Although Michigan jumped out to an early 8-0 lead, Illinois’ offense was solid during the first half. The Illini stayed tight with the Wolverines and ended the first shooting 48.3 percent, 25 percent from the arc and kept the score within five points going into halftime (39-34).

Michigan produced more consistent scoring throughout, with every starter in double digits and the group making up 68 of the team’s 79 points. The Wolverine bench netted 11 points, nine coming from Michigan sophomore Isaiah Livers.

“I just saw what I had been missing and what I needed to tweak,” Dosunmu said. “I’m trying to use that in my game now. I just need to keep watching film, keep trying to learn the game and keep getting better each day.”

Dosunmu led the Illini with 23 points, 19 of which he scored during the first half, just off his 19.7 points-per-game average over the last three games. The Chicago native was in good company alongside freshman forward Giorgi Bezhanishvili and sophomore guard Trent Frazier, who netted 15 and 13 points respectively.

The game also marked the end of Frazier’s dry spell. Traditionally at the helm of the Illini offense, Frazier had seen double digits just once in the last three contests before facing Michigan.

On defense, Dosunmu put together a career night and led the team with seven defensive boards, two steals and two blocks, both of which were chase-down blocks.

With none of Illinois’ upperclassmen entering double digits, production fell on younger Illini. According to Bezhanishvili, the team has room to grow in the coming years, especially against teams like No. 2 Michigan.