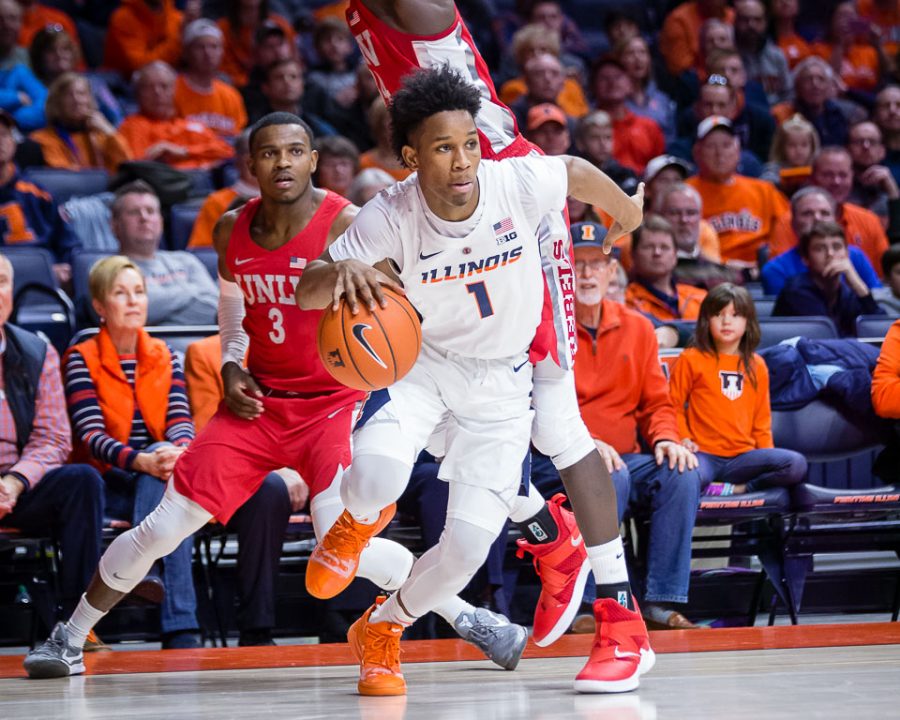 Illinois guard Trent Frazier (1) drives to the basket during the game against University of Nevada, Las Vegas at State Farm Center on Saturday, Dec. 8.

Illinois has played the fifth-toughest schedule in the nation according to Kenpom, and through 16 games and five conference losses, it has shown.

The inexperienced Illini gave No. 2 Michigan a game in their Big Ten home opener last week, trailing throughout but managing to keep the score close.

Against Minnesota on Wednesday night, Illinois (4-12, 0-5 Big Ten) will hope to convert competitive play into its first conference win and its first win since a 73-55 victory over East Tennessee State on Dec. 15.

Second-year head coach Brad Underwood has only a .375 winning percentage at Illinois, despite a career mark of .690.

On Tuesday, Underwood said despite the losing streak, there isn’t pressure building on his team as it has continued to drop game after game against Power Five competition this season.

“We approach every game to try to win it,” Underwood said. “I told the team that we lost by 10 to what will probably be the No. 1 team in the country.”

Junior guard Amir Coffey leads the Big Ten in scoring during the conference season, averaging 23.4 points per game in five Big Ten games, and each of Minnesota’s starters is averaging double figures on the year.

Underwood noted the Golden Gophers’ physical prowess as something that will make them dangerous to match up with, particularly with the 6-foot-8-inch Coffey routinely running the point and outmatching smaller point guards.

Minnesota’s size also tends to give opponents a rough time on the board, an area where Illinois has especially struggled with this season.

Currently, Illinois is last in the Big Ten in rebounding, averaging just 33.6 rebounds per game to the Gophers’ 39.4 (No. 3 in the Big Ten). Minnesota also boasts the nation’s third-best rebounder so far this season in senior Jordan Murphy, who is averaging 12.1 boards per game.

“They’re a very, very good rebounding basketball team,” Underwood said. “They get to the foul line a great deal. And then they are, kind of on a quiet side, one of the better transition teams in our conference, maybe in the country. They do a great job of pitching ahead.”

Illinois revolves around playing at a high pace, though that’s something the Golden Gophers like to do as well.

Sophomore guard Trent Frazier thinks the team’s struggles are more dependent on how the team has played in spurts during games. On Wednesday night, Frazier said it will be essential to come out firing against the Golden Gophers, especially out of the halftime break.

“We’ve just got to come out ready,” Frazier said. “Our second half is big right now, we’re starting off a little slow, I think that’s our main thing. We’re getting better. This team, we’re growing, we’ve grown a lot. Young guys have picked up a lot of things, and I’m really excited for the future of this program.”

Frazier noted that, as of late, he’s struggled to knock down many of the shots he was hitting regularly to open the season. But after a 5-of-10 shooting performance and 13 points against Michigan, he’s feeling more confident.

“This team trusts in me and my coach trusts in me,” Frazier said. “I’ve got to just keep working and do whatever it takes to make this team successful.”

While the Illini’s sophomore star has slumped, freshman guard Ayo Dosunmu has stepped up in a massive way.

The Chicago-native has put up 82 points in Illinois’ last four contests, leading the Illini in scoring in each with an average of 20.5 points and 5.8 rebounds. No Illini freshman has scored so much in a single stretch since Cory Bradford scored 82 as a redshirt-freshman in January of 1999.

Dosunmu said his confidence is soaring after starting the season with some inconsistent performances.

He and Frazier both know one way the team can get back on track is to each play well simultaneously; not to mention, better execution as a team offensively has become crucial.