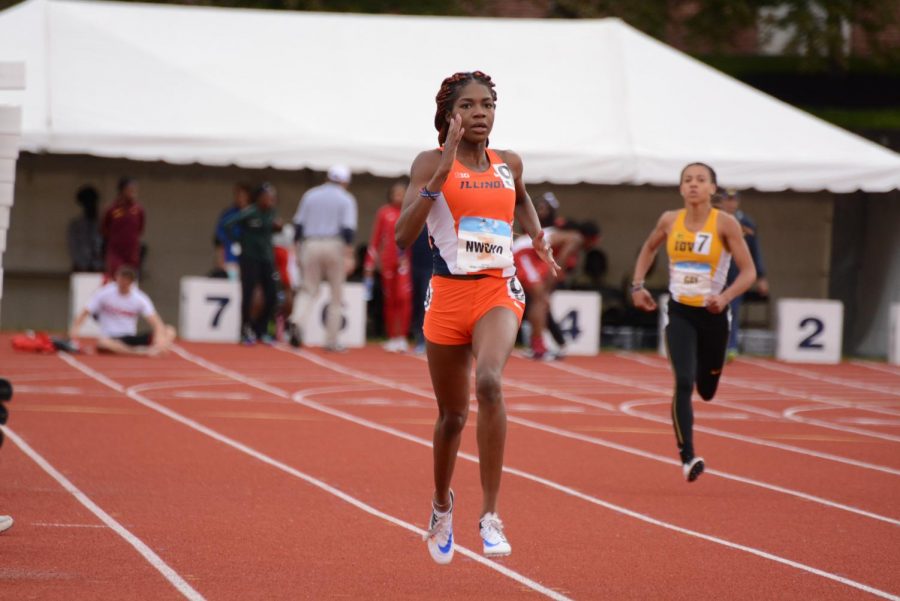 Junior Chisom Nwoko races for the Illini during their outdoor season. The team will now head indoors and begin to compete at Huff Hall.

The Illinois men’s track and field team finished first out of five schools to start its season at the Illini Open, in Champaign, on Saturday.

Last season, the Illini graduated David Kendziera, who won a silver medal in the 60-meter hurdles at the Big Ten Championships in 2018. Kendziera competed in the U.S. Championships last summer and is currently a professional runner.

Last season, redshirt senior Jonathan Wells competed in the USA Track & Field Indoor Championships and finished sixth in the long jump, but he competed unattached during 2018.

Davis returned this year for the Illini after placing 15th in the 3,000-meter run last spring, subsequently winning All-American honors. He redshirted the 2018 outdoor track and cross country seasons after sustaining an injury during the 2018 indoor season. Davis was also the USATF and Cross Country Coaches’ Association Midwest regional Runner of the Year for indoor track in 2018.

The Illini have a different schedule this year. The team competes at Iowa Friday and Saturday, as opposed to Nebraska, but will go to Lincoln Feb. 1-2. Illinois will host two meets rather than three, including one on the final weekend, instead competing at Notre Dame. Head coach Mike Turk said the team will compete at Eastern Illinois as one last preparation for Big Ten Championships.

With an even mix between underclassmen and upperclassmen, the Illini can continue to grow from last season’s successes. Junior pole vaulter Jacob LaRocca built off his career-best 5.23-meters (17-1 1/4 feet) from last season’s Big Ten Championship meet by winning the event during the team’s first home meet of the 2019 season. He placed at last year’s Illini Open and earned a bronze medal at the Big Ten Championship meet.

“I’ve been more focused all around,” LaRocca said. “I think I could go 18 feet this year.”

The team will travel to Iowa City this weekend to compete at the University of Iowa, a meet that will feature Minnesota, Wisconsin and Purdue. Turk said running at Iowa will prepare younger Illini for the Big Ten meet at Michigan since the tracks at both schools are 200-meter lap facilities.

“We’ve got a whole lot of people that will be traveling for the first time this weekend when we go to Iowa,” Turk said. “We’ve got a great group of people in our program.”

The Illini began the indoor track season by finishing first out of eight teams on Saturday in Champaign at the Illini Open.

“I like indoor track because it gives you a taste of the competition,” Driver said. “It’s nice for (underclassmen) to get their feet wet before heading to the outdoor season.”

The Illini also have two throwers on the current roster, up from just one last season. The number marks the most throwers the team has had since 2015. Sophomore thrower Katie Witte competed unattached in the weight throw at last year’s Illini Open.

“Our goal is always to have a well-rounded program,” Turk said. “We’ve had a pretty good start with the couple of kids we have now.”

The distance group also had a strong showing from sophomore Rebecca Craddock last season during the indoor Big Ten championships. Craddock placed eighth in the mile and qualified for the 1,500-meter run in the NCAA preliminaries during the outdoor season.

The distance department also features a majority of the cross country team, which finished fourth in the NCAA Midwest Regional meet in November.

The Illini only have a handful of upperclassmen on the roster, with ten juniors and seniors, a group affecting the type of meets the team is attending this year. The upperclassmen group competes at a higher skill level than most underclassmen. Both teams will run a similar schedule this season, but the women’s team is running in several different meets, notably one at Nebraska Feb. 1- 2 instead of this weekend.

“Our women’s team is extremely young,” Turk said. “I think 75 percent of our team is freshmen and sophomores. We made some of those schedule changes because there’s a learning curve.”

Despite the team being so young, Driver is optimistic for the season.

“I can definitely see more women scoring, as far as getting on the board for us,” Driver said.

The Illini did just that Saturday winning the meet. Junior Chisom Nwoko won two events for the Illini: the pole vault and the 200-meter dash.

“I wanted to give my training a chance to see where it was at the moment,” Nwoko said. “It was really nice to be successful.”