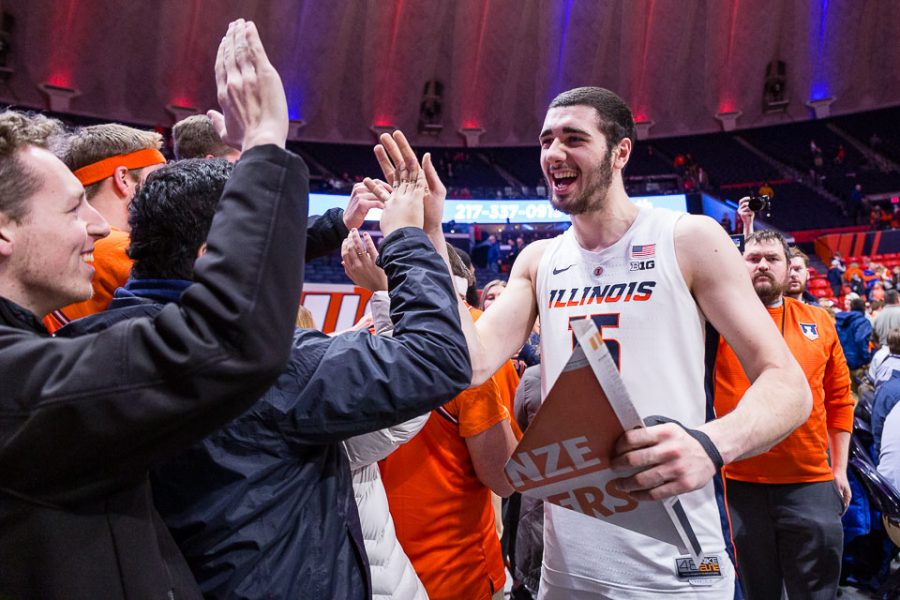 Illinois forward Giorgi Bezhanishvili (15) high fives members of the Orange Krush after the game against Minnesota at State Farm Center on Wednesday, Jan. 16.

The Illini played host to conference rival Minnesota Wednesday night, and with a 95-68 victory, the team walked off the court with its first Big Ten win of the season and snapped a five-game losing streak.

Illinois was in control from beginning to end, from Ayo Dosunmu’s jumper which opened the scoring to walk-on Drew Cayce’s layup in the game’s waning moments.

The Illini spent a total of 38 minutes with the lead and at one point in the second half had a lead as large as 36 points. Minnesota never led again after being up 5-3 in the game’s second minute of action.

The Golden Gophers shot just 44 percent on the night, and freshman center Giorgi Bezhanishvili was eager to talk about what a win like this meant for the program.

“We work every day,” Bezhanizhvili said.“Our record doesn’t show it, but we’ve been working hard … it makes you feel like you’ve accomplished something when you’ve been working so hard.”

The entire team seemed to click, something both Underwood and the players mentioned while sitting at the podium for the press conference. However, the star of the night was still none other than freshman guard Ayo Dosunmu, who has now scored 105 points in his last five games.

Against Minnesota, the freshman led the team with 23 points and threw in four rebounds two assists and two steals. Coach Brad Underwood didn’t hesitate to talk about what a skilled player his starting guard is.

“Ayo is unique,” Underwood said. He’s got a great mental capacity to learn and absorb information … our system is sinking in, and he’s able to play quickly but the game to him is slow.”

Elsewhere fellow freshman Bezhanishvili added 20 points of his own while also picking up six offensive rebounds, something that he — and the team — has struggled with this year. The rebounding efforts across the board helped the Illini out-rebound the Golden Gophers 39-26, and the team limited Big Ten rebounding-star Jordan Murphy to only three total rebounds on the night.

Sophomore guard Trent Frazier also got going, chipping in 15 points of his own, despite not playing much of the first half due to early foul trouble.

The entire team shot well, hitting 56 percent of their attempts and shooting an even 50 percent on three-pointers. Outside of Frazier, no one missed more than four shots.

Underwood was eager to talk about the night and what it means to the locker room.

“I’m so happy for that locker room because it’s been guys that know they’re good players,” Underwood said. “Winning is really, really hard. Now, we have to do the next thing … we proved we can play with anybody and now win games.”

It was an emotional game for Illinois, and they let it show throughout the night. The team had plenty of celebrations on the bench and even some poses after made shots. When the final buzzer sounded and the team headed to the locker room, senior guard Aaron Jordan could be heard yelling to his teammates “Somebody turn the AUX on!”

“You should enjoy those moments,” Underwood said. “That’s what this game is about, creating that emotion.”

Dosunmu also commented on how that emotion and having fun is important to the team’s success.

“Basketball is a game; you gotta play it fun. Basketball is great when you make it fun,” Dosunmu said. “We’re having fun, and everything else will take care of itself.”

Illinois put 95 points on the board, which is the most in a Big Ten game since beating Minnesota back in 1997. The Illini program has had some good luck against the Golden Gophers this season, beating them during the football, women’s basketball and now men’s basketball seasons.

Before leaving the press room Dosunmu parted with one statement:  “Early in the season, we took a lot of punches. Now, it’s time for us to throw punches.”