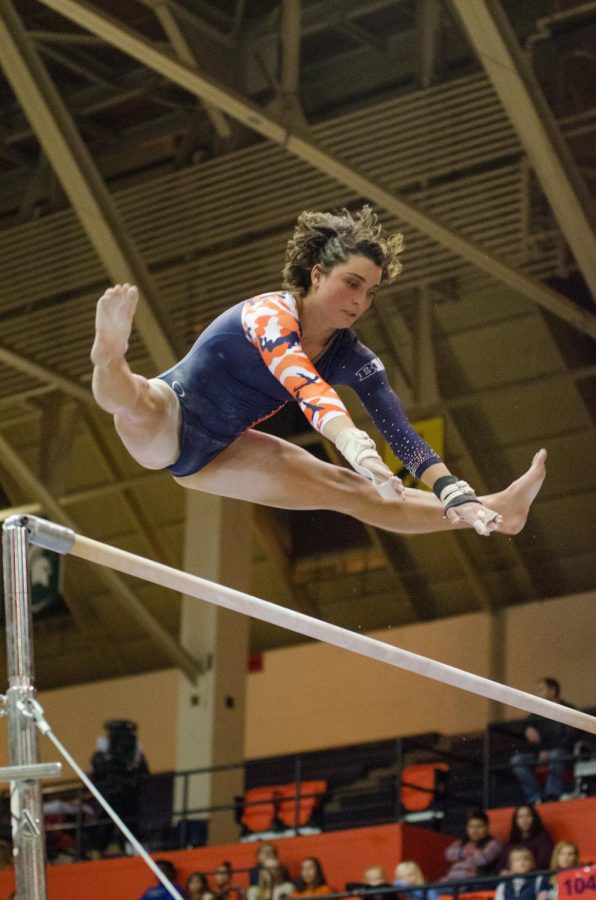 The Illinois women’s gymnastics team earned their first Big Ten victory last weekend, edging out Maryland with a score of 195.075 to 194.950 at home in Huff Hall.

The Terrapins started off with the lead during the first two rotations, after strong performances on uneven bars and vault. Two of their gymnasts earned the top event score of 9.825 for balance beams.

Illinois quickly caught up, however, reducing Maryland’s lead to a smaller amount each rotation until the last floor exercises secured them the win.

Senior Mary Jane Otto took home the event title for uneven bars with a 9.875, junior Rae Balthazor won in vaults (9.800), sophomore Kylie Noonan won the floor exercise (9.875) and junior Karen Howell was the overall winner and accumulated a total score of 39.875 — a career high for her.

Despite the rough start, the team was proud of their work.

“They really did a fabulous job of staying in the meet until the end physically,” said head coach Nadalie Walsh. “It wasn’t our best vault rotation, but that is a very easy fix for us, so I’m really confident moving forward from this point they’ll be able to work things together, and I think they’ll keep doing great.”

The meet reflected the work Illinois has put in so far this season, showing what they could do to improve their performance in the close victory. Even though Noonan made mistakes in some of her events, she still strived to put in her best effort.

“This meet, since we had such a great last meet, we really just wanted to build on top of that and try and get rid of many little mistakes we could,” Noonan said. “And honestly, I think we did that because we kind of had a fall today and we still scored about the same as last meet … That just shows that we got rid of a lot of other mistakes, so I’m really proud of our team and that was our goal and I think we accomplished it.”

Each event team is building from their successes and mistakes from the early part of the season. Up until the Maryland match, Illinois competed in two quad meets, where in the second meet Illinois upset No. 7 Kentucky with an impressive floor routine. Now, in the team’s first dual meet of the year, the floor routine once again came up big.

“Our floor team is doing a fabulous job of each week, doing a little bit better, and the scores are reflected in that,” Walsh said. “Along with bars, it was really outstanding to see our bar team go out there and hit more handstands and be more confident, so those two events have really step forward, and our beam is always great in the gym. We just need to do practice in the meet.”

According to Noonan, only having two teams competing instead of three or four means the audience’s attention was more unified, bringing a different energy.

“They’re definitely a lot different, there’s a lot more commotion,” Noonan said.  “A lot more noise when there’s a quad meet and you can kind of pull the energy from the other teams by just the shouting, but today we kind of had to manufacture the energy from within us and our group, so we did a great job of staying together and really not paying attention to the other team and focusing on us.”

The Illini’s next meet is away at Nebraska on Jan. 26. The goal, according to Walsh, is to continue doing well so their qualifying score will be intact for the regional championships.

“ I expect from (next) Saturday that the girls are very hungry, and they’ll know that every single landing is going to count,” Walsh said. “Just like they knew that today, but going into the arena with Nebraska, they’re going to have to bring their A-game and not let anything intimidate them, and so I think the girls are going to be more fierce, and they know what to expect from themselves, and that with encouragement we’re just going to keep getting to the level that we need to be.”