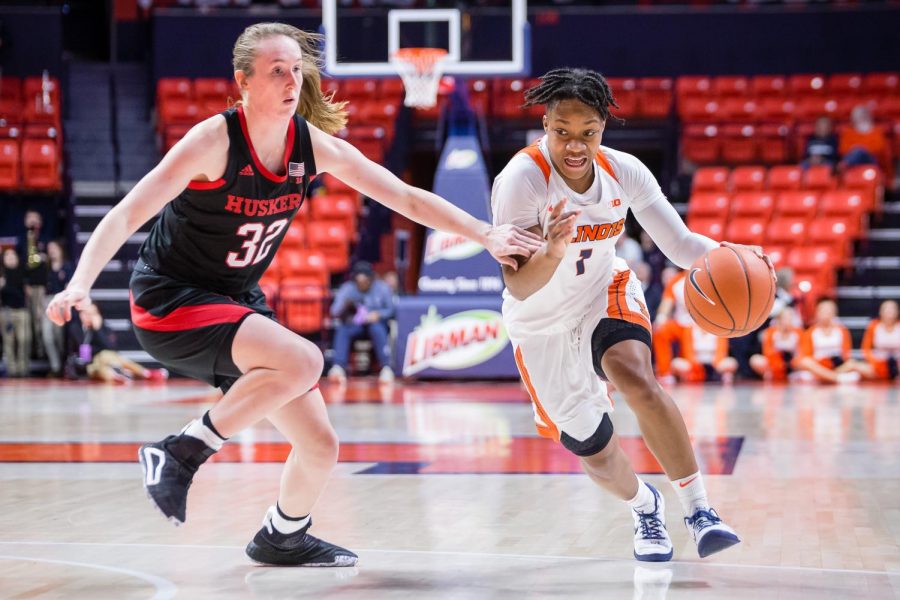 Illinois guard Brandi Beasley drives to the basket during the game against Nebraska at the State Farm Center on Thursday. The Illini lost 77-67.

Illinois women’s basketball head coach Nancy Fahey took a long walk by herself just a few weekends ago to reflect on the team’s season so far.

During the walk, Fahey focused on the importance of winning conference games, especially at home, after going 0-16 in the Big Ten last season. She thought about it again as her team dropped its second straight home conference game, this time to Iowa by a score of 94-75.

The passionate coach seemed even more vibrant than usual during the game, possibly because of her satisfaction with 3,000 fans showing up for the “Pack the House” event.

“First, let’s talk about the crowd,” Fahey said. “That was outstanding, the people that came out today to support us. It was our biggest crowd, and it does make a difference when we have a crowd; momentum can be built by that.”

Right from the get-go, it was clear the game was going to be an offensive battle. The Illini were matched up against a Hawkeye team led by star center Megan Gustafson, who came in averaging 26 points and 13 rebounds per game.

The Illini came out to compete, having four players go over double digits in scoring, led by junior Brandi Beasley with 21 points and senior Alex Wittinger with 20 points. However, the Hawkeyes stretched the floor from three because of Gustafson’s ability to command the low blocks.

“Because you have to give so much attention to Gustafson inside, you’re constantly in rotation when the shots go up. You do have to respect their shooters,” Fahey said.

Beasley was instrumental in providing momentum during the third quarter with back-to-back steals leading to easy transition points, giving Illinois a five-point run. Following a subpar shooting performance last game, Beasley led the team in points on Sunday, including a pull up three to start her day.

“It’s very mental for me, just coming out with an aggressive mindset, hitting my shot and taking what the defense gives me,” Beasley said.

After a cold shooting start for Wittinger, the senior drilled six shots in a row, most of which came from the top of the key.

“My teammates did a good job giving me the ball in opportune times,” Wittinger said. “Their post players didn’t like coming outside a lot, so I tried using my pull up jump shot.”

Wittinger’s defensive presence on the court was felt. She blocked a layup, which led to a transition three by freshman guard Arieal Scott that sent the crowd into a frenzy. The freshman seemed to step up whenever the Illini needed a basket.

“Arieal is in the gym a lot,” Fahey said. “Since school started, I think she’s been in there every night, and that’s what happens. That’s something coaches can’t give to kids. I can’t hand out confidence. We’d all want everyone to have confidence when they play.”

Junior guard Cierra Rice got in on the scoring action as well, becoming the fourth player on the Illini to score in double digits on Sunday with 11 points on an efficient 4-5, including three from beyond the arc in her 29 minutes on the court.

“What was nice to see was that we had four kids in double figures,” Fahey said. “Last year we were only talking one or two. That’s when you get momentum.”

The offense wasn’t the problem for the Illini. It was a defense that simply could not find answers for Gustafson and her army of sharpshooters.

“Megan’s a great player; 12-14 is tough to guard. We definitely know what we need to do next time we play (her),” Wittinger said.

According to Fahey, there wasn’t more she could have asked for from her offense, as they shot 48 percent from the field and 62.5 percent in the second quarter.

Gustafson drilled her first eight shots and ended 12-14 from the field on the night, including a buzzer-beating three as the first quarter came to a close.

The Hawkeyes were dominant from both inside and out. Gustafson, among others, got in the paint at will and converted nearly every shot inside. When the paint wasn’t open, the Hawkeyes were only a few swing passes away from a wide-open three, an area where the team went 11-22.

The Hawkeyes scored a whopping 46 points in the paint compared with the Illini’s 28, not to mention 10 second-chance points for the Hawkeyes, while the Illini only scored two of those points.

Illinois has taken down bigger Big Ten foes, such as a No. 12-ranked Minnesota, so it’s not as if the team hasn’t shaken off the burdens of last year’s season.

From an outsider’s perspective, the Illini are putting up the numbers to compete with most others, but seem to go cold on both sides of the basketball for certain stretches at a time.

The Illini’s biggest lead all game was by just two points for 29 seconds in the first quarter, but after that, the Hawkeyes held the lead for the rest of the game.

The Illini came out with an aggressive defense, but the Hawkeyes finished contested shots with consistency. It was another case of good defense but better offense.

“I was pleased with their aggressiveness, but it really boils down to giving up 94 points,” Fahey said.

The type of performance the Illini put up on Sunday is usually enough to win games, but the Hawkeyes came out ready and played even better, according to Fahey.

“Seventy-five points is enough to win, that’s what I told them,” Fahey said. “We told a lot of kids, ‘green light,’ we gave the kids the green light to shoot … take your shot. When you play with confidence, you’re less likely to give in, and that’s something we’re trying to build here.”