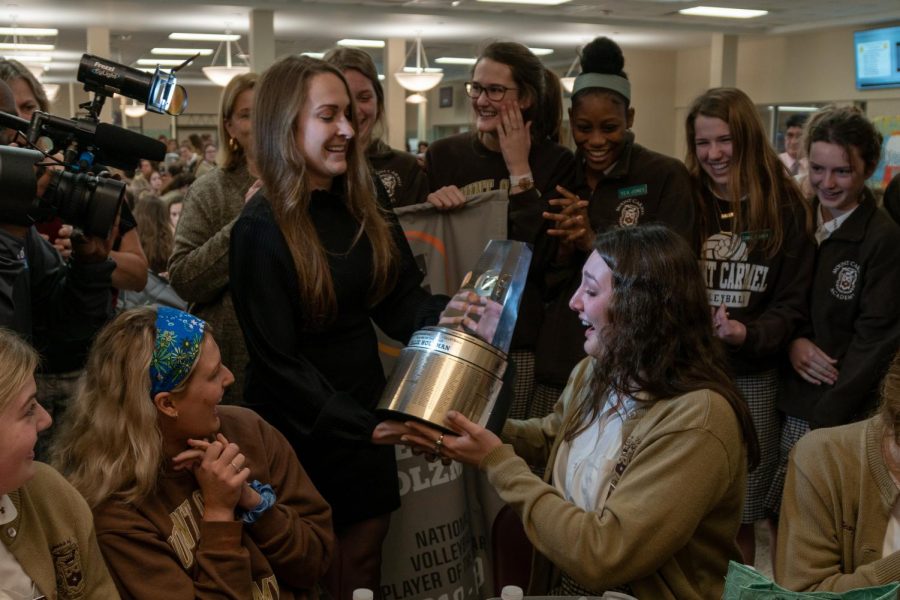 Illini incoming freshman Ellie Holzman was surprised with the Gatorade National Volleyball Player of the Year award on Wednesday.

Passion. Perseverance. Power. Meet @ellieholzman, whose dedication to the game and unrivaled skill set established her as one of the top high school athletes in the nation and our 2018-2019 Gatorade National Volleyball Player of the Year! #GatoradePOY https://t.co/os5gspZdEd pic.twitter.com/QrZVuvjQxq

“Oh, my gosh, it’s incredible,” Holzman told The Daily Illini. “I owe everything to the people that helped get me here.”

Holzman will be joining the Illini next season after a high school career which put her on the map as one of the most dominant players in the country. Coming out of Mount Carmel High School in New Orleans, Holzman is the No. 1 player in the state and the No. 13 best player in the country, according to MaxPreps.

The six-foot-two senior has taken home three-straight Louisiana Gatorade Player of the Year awards and has now joined the prestigious national club which includes players such as USA soccer’s Abby Wambach and the NBA’s Karl Anthony-Towns.

During her last season, Holzman led the Cubs to a 42-2 record and a fourth-straight Division I state championship. Next on her list is competing for Illinois volleyball.

Illinois was the final school Holzman visited and she bought into what the program was offering, giving a lot of credit to the Illini’s recently revamped coaching staff led by Tamas.

“I just got super close with the coaching staff,” Holzman said. “I felt so comfortable around them that I knew it was the place for me it was a feeling of home.”

Tamas responded to the announcement on Twitter Wednesday afternoon.

A middle blocker, Holzman comes into the program at what can be considered an ideal time for the head coach. One of the Illini most historic players in Ali Bastianelli finished her final year of eligibility and will be graduating in the spring. Not to mention, nationally renowned setter Jordyn Poulter has already graduated from the University.

When considering Holzman’s accolades, it can be expected the first-year player will make an immediate impact on the Illini’s frontcourt.

“There is definitely big shoes to fill,” Holzman said. “I just want to do what I need to do whether it is on or off the court.”

Holzman was in Minneapolis for the Illini volleyball team’s Final Four run and has also attended several matches on campus. When visiting, she was quick to fall in love with the energy of the fans around campus.

While she was heartbroken to see the semifinal exit of the Illini in the Final Four, she also understands that the program still has room for growth.

“I am so excited to go up there and start my career,” Holzman said.

For a closer look at Holzman check out the video brought to you by Gatorade below:

This story has been updated with the most recent information.