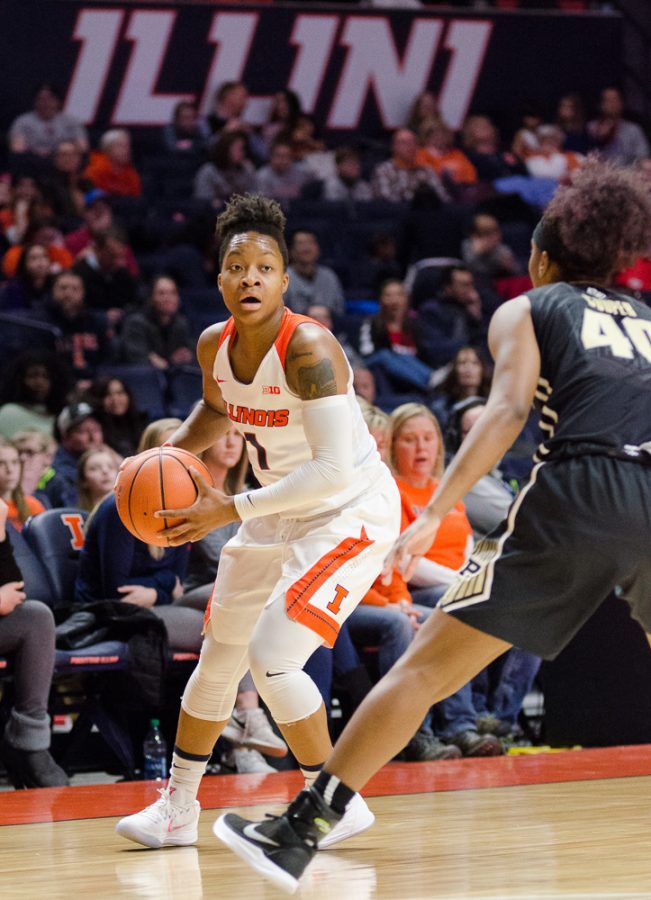 Brandi Beasley handles the ball for Illinois during their 73-54 loss to Purdue on Sunday, February 4. Illinois beat Valparaiso 73-54 on Wednesday.

The Illinois women’s basketball team has played 80 games since junior Brandi Beasley began her freshman season in fall 2016. Appearing in all 80 games and only coming off the bench twice in that span, Beasley has been the Illini’s top guard since she stepped foot in the State Farm Center.

Even though Illinois has lost players and switched coaches since Beasley’s freshman year, the junior’s success has been one of the program’s constants. Beasley was one of Illinois’ top scorers her freshman year, averaging 13.6 points-per-game and was ranked second among Big Ten freshmen for her 15.3 points-per-game in conference play.

Following her standout freshman season, the Memphis native was named to the 2017 Big Ten All-Freshman Team. Beasley went on to continue her offensive success into her sophomore season, averaging 12.3 points per game.

Behind senior Alex Wittinger, Beasley is the team’s second-highest scorer this season totaling 193 points. Now, just past midway through her junior year, Beasley is only four points away from joining the 1,000-point club, an achievement only 29 Illini have accomplished, including Wittinger.

Despite Beasley’s general consistency, the fight to 1,000 hasn’t been easy for the guard during recent contests. Beasley has recorded single-digit scoring in three out of the last four games, being held to just five points against Nebraska. But she remained unconcerned as she continues to focus on her process.

“It’s very mental with me. So it’s not necessarily getting in the gym (more), but just watching film and just focusing on decision-making,” Beasley said.

As expected, the junior quickly bounced back during Illinois’ most recent loss to Iowa, putting up a season-best 21 points.

“After last game, it was the next practice that you started seeing (Beasley’s comeback) and that’s where you build it, in practice,” said head coach Nancy Fahey. “You could see she was like, ‘OK, I got a little more swagger back,’ and that’s credit to her. Then the product of it is when you see it on the court, I was really proud of how she bounced back.”

After her standout performance against Iowa, Beasley’s ability to score from inside and outside the arc and keep defenders on their toes appeared to be alive and well. Her passing game and court vision have also made her even more unpredictable on the court.

Earlier in the season, Beasley dished out five assists and recorded 14 points in Illinois’ win over Indiana State. Following the performance, Beasley said finding the balance between hitting her shots and setting her teammates up has been a work in progress. Following that trend, the guard has led the Illini in assists since her sophomore year when she dished out 111. This season, Beasley leads the team by a margin of 69 assists, currently sitting at 93, averaging 5.2 a game.

With Beasley’s strong performance back on track, the point guard is set to earn the 1,000-point honor in Illinois’ next contest on Thursday night at Michigan State.

“(Beasley) has really developed her game,” Fahey said. “She’s always been a great handle, but her ability to see the floor right now and see who’s open and kick out has really added to her game. It makes it tough to guard her because you never know what she’s going to do.”