Dosunmu’s recent streak taking him further into the spotlight 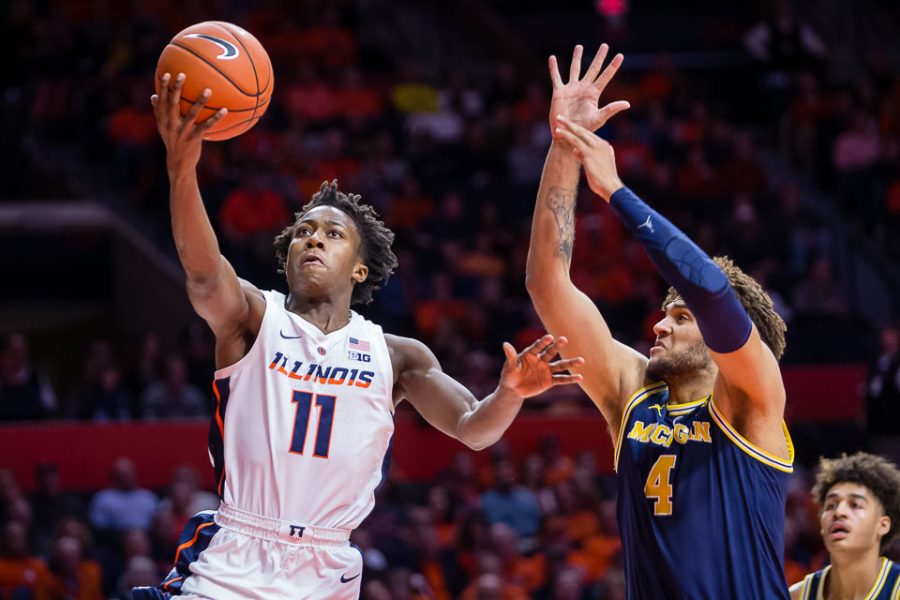 Illinois guard Ayo Dosunmu (11) goes up for a layup during the game against Michigan at State Farm Center on Thursday, Jan. 10, 2019.

The 6-foot-5-inch Chicago native came to Illinois to be a star, and though the team has struggled, Dosunmu has swiftly made a name for himself.

Averaging 14.2 points per game (second on the team), shooting 45.7 percent from the field (third) and 4.6 rebounds per game, Dosunmu is producing at a higher and more dependable rate than Big Ten freshmen are expected to.

ESPN has Dosunmu as the No. 21 prospect on the draft board, with Indiana small forward Romeo Langford (No. 5) as the only Big Ten player rated ahead of him.

“I’d be hard-challenged to find any player in the country that in every aspect of the game is playing any better,” said head coach Brad Underwood. “You can look number-wise. Starting from ground zero as a freshman and looking at where he’s at now.”

Dosunmu knows the spotlight is on him — it was for years while playing at Morgan Park and for Mac Irvin Fire — but for now, he just wants to help out his struggling Illini team.

“I’m just focusing on the college basketball season,” Dosunmu said. “Just focused on the season, focused on trying to get (conference wins) and try to be the best I can for Coach Underwood and my team.”

Sure, that sounds like a rehearsed answer, and maybe it is, but Dosunmu looks comfortable in his role on and off the court at Illinois.

He and the team visited nearby Carle Cancer Center over the weekend, taking wide-smiling pictures with patients, and he has regularly been made available to media after practice and games, routinely offering thoughtful answers to questions directed at him.

Since Illinois’ emotional Braggin’ Rights loss to Missouri on Dec. 22, Dosunmu has gone on a tear.

He’s averaged 20 points per game over a six-game stint, leading Illinois in scoring for each contest. No Illini freshman has scored as much and as consistently as Dosunmu has since Cory Bradford put up 105 points over a five-game stretch as a redshirt freshman in 1999.

In Illinois’ most impressive performance of the season, a 95-68 win over Minnesota at the State Farm Center on Jan. 16, Dosunmu managed 23 points on 9-of-13 shooting (3-of-4 3FG) and four rebounds.

“He’s really, really good in transition,” said Minnesota head coach Richard Pitino. “And then he hit those threes. Nine for 13, he was very, very efficient.”

“The game is slowing down for him,” Underwood said. “Everything becomes rushed, everything becomes new when you first come here. You can look at the missed layups, now he’s finishing through contact and taking hits. Every time he shoots it, I think it’s going in. But more importantly, he’s making the right reads and he’s making the right reads defensively. He’s gained so much defensively, he’s playing way beyond his years, he’s playing in a very mature way and that’s a tribute to him.”

But it didn’t all come easy for the state’s Mr. Basketball winner, even as he arrived amid fanfare and sky-high expectations.

Dosunmu excelled in a narrow defeat to Georgetown on Nov. 13 (25 points) then struggled mightily against No. 4 Gonzaga, went 1-for-9 from the field against Ohio State in Chicago and only scored two points against Missouri, a game in which the Tigers started three former Illini commits.

No one was stopping him from getting to the basket, but the guard who helped lead Team USA to a FIBA Americas U18 title last summer couldn’t seem to get his scintillating layups and short-range floaters to go down.

Tight one in Evanston.

The consensus No. 24 recruit in the class of 2018, Dosunmu hasn’t been immune to growing pains.

It’s how he’s ridden them out, though, something that the Illinois staff is impressed with.

“Ayo is unique,” Underwood said. “He’s got a great mental capacity to learn and absorb information.”

Underwood has certainly given his young point guard time to work out the kinks, playing him a team-leading 30 minutes per game (compared to sophomore Trent Frazier’s 29.6 minutes per game and senior guard Aaron Jordan’s 27).

Even on nights where Dosunmu’s shot hasn’t been falling consistently, like against Florida Atlantic (he had to launch 20 shots to score his 21 points) or against Ohio State, when he went 1-of-9 from the floor and 0-of-3 from beyond the arc, he remains on the court.

The second-year Illinois coach has shown more patience — and trust — with Dosunmu than he did when he had the state’s 2017 Mr. Basketball winner, Mark Smith, at his disposal last season. Smith averaged 19.1 minutes, though that diminished as he struggled to score for long stretches, and wasn’t as quick to adjust defensively as Dosunmu has been.

Big Ten opponents are keying into Dosunmu now, too, instead of just worrying about Frazier and surprisingly successful forward Giorgi Bezhanishvili. The rest of the conference slate will serve as a litmus test for how Dosunmu can deal with being the top guy, or one of the top guys, on the scouting report.

If Dosunmu can maintain his form, the NBA will continue to beckon.

The Illini faithful have already largely started their push to keep Dosunmu in Champaign, hoping he sees the benefit of another year developing in the Big Ten with the Illini program.

For Dosunmu, however, his demeanor hasn’t changed as the buzz has grown into a fervor.