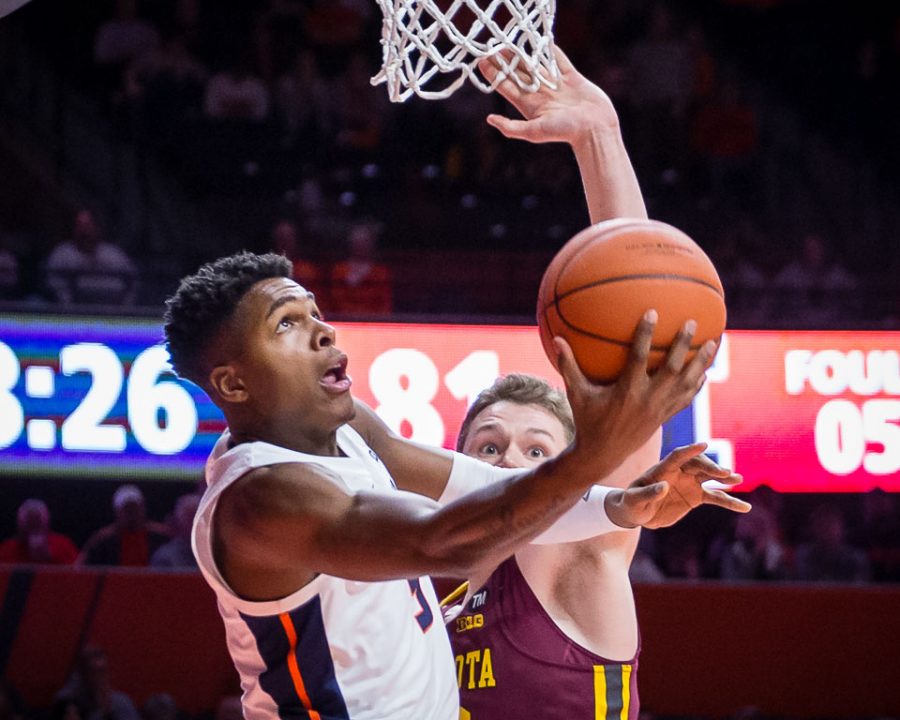 Illinois guard Tevian Jones (5) goes up for a reverse layup during the game against Minnesota at State Farm Center on Wednesday, Jan. 16, 2019.

The Illinois men’s basketball team currently sits comfortably at the bottom of the Big Ten. While the expectations for this season shouldn’t have been anything substantially greater than this outcome, finally living the reality of yet another underwhelming Illinois basketball season can seem frustrating to the team’s longtime fans.

However, even more so than previous years, this Illini basketball team seems different.

For the first time in several seasons, a direction can be seen for the program. While some may doubt the implementation of head coach Brad Underwood’s up-tempo, guard-focused, shoot-in-seven-seconds style of offense in the Big Ten, he is putting together a team of players that can make it happen.

I’ll be the first to admit, doubts about Underwood’s abilities have popped into the mind. I would consider it almost impossible for someone not to question the state of the program after a 73-71 overtime loss to Florida Atlantic University on your home court.

Although in the weeks to come, Underwood would go on to lock down the very recruit who was in the building to see the stunning FAU loss, as the commitment of big man Kofi Cockburn appears to be exactly what the Illinois team is missing. Not to mention, the team would play well against Michigan and crush Minnesota, two games that I consider to be well coached and well fought.

I will also quickly bring up something I have observed from the fortunate sideline seat I have to watch Illinois basketball compete. One thing that stands out strongly with Underwood’s second-year team is that these guys have bought in. At least as of late, Underwood has created a team environment that is more inviting yet aggressive.

Those efforts from Underwood have pulled me in.

The team still sits at a 5-13 record that will stick out as one of the more unfortunate seasons in program history. Not much positive can be taken away from such a start, but plenty can be made over the course of the team’s next 13 Big Ten games.

If you look over to the bench, plenty of young talent sits. Arguably, young talent isn’t getting enough of a shot.

Freshmen Tevian Jones, Alan Griffin and Samba Kane all fall in line when looking at the player’s average minutes of play, rounding out the least amount of minutes for scholarship players on the team. Both Jones and Griffin sit hovering around the eight-minutes-per-game mark, while Kane falls right behind with nearly seven minutes per game.

Underwood may have pulled me back in, but it’s time for the coach to highly consider looking at his time management. Considering the team’s record and with the future goals in mind, all three players should quickly experience a bump in playing time.

To give credit where credit is due, it appears the process has already started.

Jones received his career-high in minutes played in the team’s latest matchup against Iowa with 16 minutes. As for Griffin, he has received 13 and seven over the course of the last two games, respectively.

While Underwood preaches positionless basketball, these two players will typically substitute in for upperclassman Kipper Nichols and Aaron Jordan, and rightfully so. Both Jordan (27 mins per game) and Nichols (22 mins per game) have failed to impress as the stretch of Big Ten basketball has continued, and with only five wins chalked up on the board, it’s time to start shaving off their minutes spent on the court.

Second-year player Da’Monte Williams has been receiving a substantial amount of playing time over both Jones and Griffin, with practically 23 minutes per game while offering only 4.4 points per game.

When on the court, both Jones and Griffin have shown signs of growth. The big man Kane has possibly shown the best glimpses, having several blocks and impressive fadeaway jumpers already to his name.

Growing pains have been a factor for each of the three players as well, with costly turnovers or foolish fouls, but with a team that has little to fight for in terms of a postseason bid, the focus should strictly be on the growth of the current team. The future of the program rests in the hands of these three players in a big way, especially with the increasing interest of Dosunmu by NBA franchises.

With only eight or fewer minutes a game for these freshmen, the Illini fans have seen a little of what they can truly do. Time on the court will only help these players grow faster and the production change. With plenty of the season left to go, it’s time for the Illini to lean heavily on a young rotation.