Illini freshmen blossom in The Garden 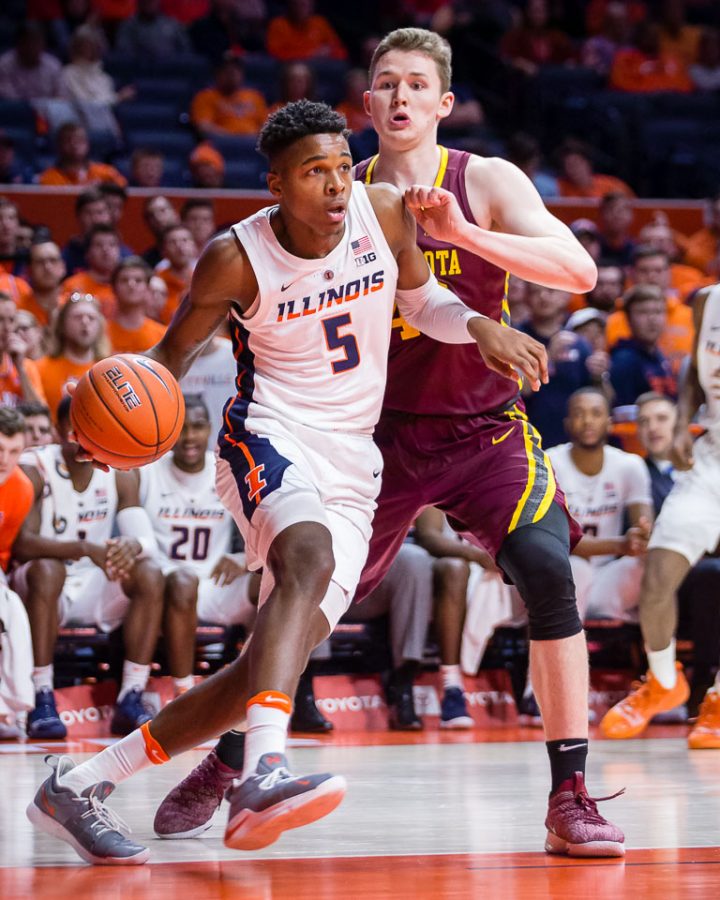 Illinois guard Tevian Jones dribbles around his defender during the game against Minnesota at the State Farm Center on Jan. 16. The Illini won 95-68.

The Illini (6-14, 2-7 Big Ten) rode a breakout performance from freshman wing Tevian Jones to an upset victory in the Big Apple.

Before Saturday, Illinois had lost 18 of its last 19 games away from the State Farm Center.

The program’s last win over a ranked opponent came back in the John Groce era when Illinois beat No. 20 Iowa 68-66 in the Big Ten Tournament on March 10, 2016.

Jones, who only played five minutes against Wisconsin last Wednesday, played a career-high 23 minutes and added four rebounds and three steals in his career-best performance.

Fouling issues had been a reason head coach Brad Underwood was hesitant to play the freshman in more than a reserve role, but Jones only managed one on the day.

The Arizona native was suspended for eight games earlier in the season for a violation of team rules and has been fighting for minutes on the court ever since. In terms of production, Jones hadn’t scored more than five points besides an eight-point performance in 18 minutes in the season opener against Evansville.

“I really just kept my head straight. I didn’t let my situation affect me,” Jones said after the win. “I stayed in the gym and kept working. Hard work paid off.”

Underwood credited Jones after the game for staying motivated both during the suspension and since he’s been back on the court.

“He’s a guy that’s very capable,” Underwood said. “He’s just getting his sea legs back under him. I’m very proud of him.”

Illinois closed out the game on a 22-8 scoring run after the team trailed Maryland 59-56 with 6:53 remaining.

Senior guard Aaron Jordan started the run, drawing a foul on a made basket and sinking the ensuing free throw to tie the game.

Then Jones hit from three to give the Illini a 62-59 lead, one they never relinquished.

Giorgi Bezhanishvili, who struggled to score (3-of-9 FG, six points), converted in the paint after a feed in traffic from Feliz to put the Illini up 64-61 with 3:23 to go.

Jones then stole the ball, eventually leading to Feliz getting fouled and making two more free throws for Illinois, making it 65-61 with 2:43 remaining.

After a poor free throw shooting performance against the Badgers (12-of-22), the Illini hit 20-of-22 attempts at The Garden, including a perfect 12-of-12 after Jones’ steal to seal the game.

Illinois also turned Maryland over 21 times, while only turning the ball over nine times.

“We were in the zone defensively,” Dosunmu said. “That was the best zone we’ve been in all year. We were talking, we were locked in, we were rebounding. That’s contagious. When you’re talking a lot, that’s contagious.”

Illinois benefitted from the likes of Jones and Feliz massively off the bench, scoring 37 bench points to Maryland’s 12. The Illini also did well to get out on the break, outscoring the Terrapins 27-6 in transition.

“To see Tevian Jones, Andres Feliz, Alan Griffin, Adonis (De La Rosa), to see those guys contribute the way they did,” Underwood said. “It brings a smile to my face. It’s about that locker room today. We executed, we made some shots. To me, it’s a lot more about perseverance and showing up and competing. We did that today and we were very fortunate to beat a very good basketball team.”

Underwood spoke with pride as he described his team’s mental fortitude and willingness to work for improved results.

“I tell everybody: I’m the luckiest guy in the world because I get to coach this group,” Underwood said. “This is a resilient locker room; they show up every single day and work hard. They’re a sponge for information. They want to continue to grow. Today was a result of that.”