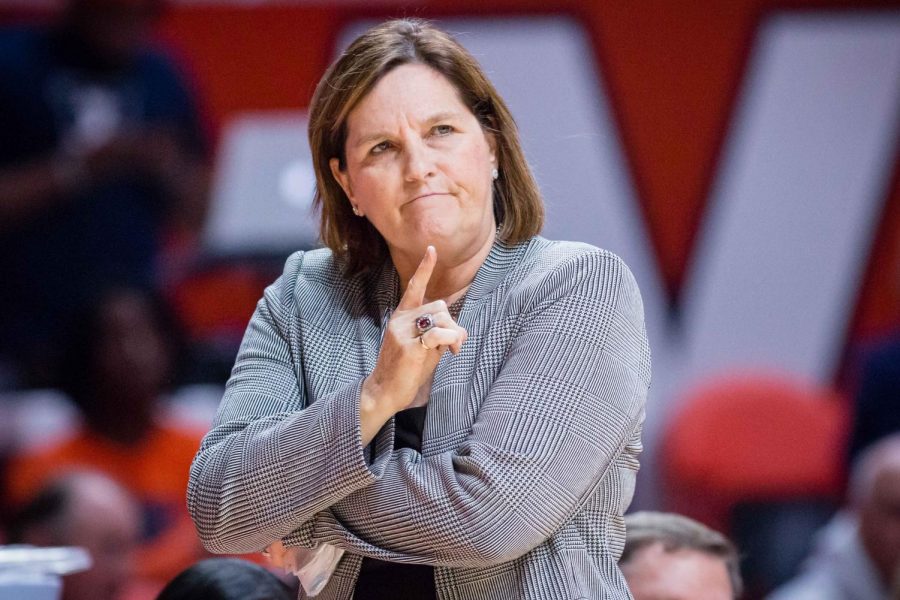 Michigan State
Heading into the conference season at 8-3 and securing a Big Ten victory early on, the Illinois women’s basketball team had strong momentum as it entered the heart of the season.
Since that conference win three weeks ago, the Illini have struggled to return to the win column, dropping their fifth straight game Thursday night at No. 23 Michigan State 77-60. With the loss, Illinois fell to a losing record for the first time this season (9-10).
“(Michigan State) got some early three’s, and it got us in a hole,” said head coach Nancy Fahey. “But we fought back, and we got it within five later in the third quarter, but then it would slip away again.”
One of the few positive aspects of Illinois’ losing effort was junior Brandi Beasley. Leading the Illini in scoring for the second straight game, Beasley recorded 15 points and three assists. The guard also tallied her 1000th point in the game, coming on a free throw in the third quarter.
Behind Beasley in double-digit scoring was redshirt junior Cierra Rice, who finished with 10 points and led with four assists. The rest of the Illini struggled to get going offensively, the next highest-scorer being senior Alex Wittinger who tallied only seven points.
As has become a trend, the Illini got off to a slow start, failing to score until four minutes into the contest, giving the Spartans an early 6-0 lead.
Illinois continued to have scoring troubles in the final minutes of the quarter, only managing to score nine points total. Michigan State took advantage of the lackluster offense and went on an 8-0 run.
Fueled by freshmen Arieal Scott and Mackenzie Blazek, the Illini gained some momentum back and outscored the Spartans 21-17. Scott heated the Illini up with a three-pointer to start the quarter while Blazek went on a 5-0 run to close out the half.
While the Illini cut their deficit down to nine before halftime, the Spartans would not go away easily. Beasley recorded five straight points to open up the half, but Michigan State responded quickly with a 5-0 run.
The Illini defense had a strong third quarter holding the Spartans to just 40 percent shooting from the field. However, the offense struggled to cut into Michigan State’s lead shooting just 35.7 percent from the field.
Heading into the final 10 minutes with a 10-point advantage, the Spartans only extended their lead throughout the quarter despite Illinois trying to hold on.
While Illinois’ defensive pressure resulted in 17 points off 14 Michigan State turnovers, the Spartans capitalized on the Illini’s rebounding struggles. Michigan State secured 47 rebounds opposed to Illinois’ 25, using its size advantage to score 16 second-chance points.
“The boards really hurt us tonight. (Michigan State) really out-rebounded us,” said Fahey. “They are a big team, and we really had to lock down. That was a big part of our game.”
Northwestern

The Illinois women’s basketball team continued its Big Ten losing streak Sunday as the team was defeated in its second matchup of the season against Northwestern by a score of 64-56.

Coming into the game, the Illini were on a five-game losing streak after dropping the contest against Michigan State. The Illini have played the Wildcats earlier this season in Evanston, where they lost 68-45.

The Wildcats came into the State Farm Center Sunday with the best scoring (57.1 PPG) and field goal percentage defense (35.2 percent) in the Big Ten.

The loss served especially tough to swallow, as the Illini held the lead for most of the game.

“Boxing out is something we talk about all the time,” said guard Brandi Beasley. “Today, it was terrible, to tell it how it is. That’s pretty much what cost us this game because we had the lead. Second and third chance opportunities put them back in the game.”

The Illini showed up in spurts throughout the game but failed to close out the game come crunch time.

In the first quarter, the Illini started hot as they capitalized on easy transition opportunities and were able to convert on tough shots. After being honored pre-game for reaching 1,000 career points, Beasley came out ready to play as she highlighted the first quarter with a coast-to-coast play that ended with a pull-up jumper in transition. The Illini shot 53 percent from the field while holding the Wildcats to just 33 percent, ending the first with an 18-14 lead.

“Just watching film helps me mentally. I feel like it helps see what’s open on the floor and understand how their defense plays,” Beasley said. “I actually sat down and watched film by myself before the game today.”

As the second quarter began, there was no shortage of defensive plays.

The two teams both played scrappy defense by drawing blocking and hand checking fouls, which gave the refs a busy second quarter. The Illini only trailed for 12 seconds the entire first half, a strong offensive effort after failing to lead at all during their last game at Michigan State.

Both teams also cooled off shooting, as the Illini shot 38.5 percent from the field while the Wildcats only shot 31.4 percent. The Illini ended the first half with their first lead against a Big Ten opponent all season up 34-25.

To start off the second half, the Wildcats rallied hard to get back into the game. With the Illini getting baited into shooting fouls, the Wildcats began to chip away at the lead. Nonetheless, the Illini stomped out the momentum with a flashy play of their own. Beasley showed out in the third quarter as she made another highlight play by taking a steal coast-to-coast and finishing it off with a crafty Euro-step that sparked a 10-0 run. However, Northwestern drilled a buzzer-beater three to end the quarter and swing the momentum in its favor despite the 51-40 Illini lead.

“I feel like I did a great job starting off, pushing tempo, keeping my team aggressive and looking for my teammates to get them good looks,” Beasley said.

In the final quarter of play, the Illini struggled with foul trouble and grabbing defensive rebounds as the Wildcats clawed back to tie the game halfway through the quarter. As the Illini began to cool off offensively, the Wildcats found their stroke and went on a 16-0 run to give them their first lead of the game. The Illini began to fizzle in the fourth as they failed to score a basket until there were two minutes left and ended the quarter shooting just 10 percent. The Wildcats continued to extend the lead and topped off the comeback with a 64-56 victory.

“It was a message of the boards,” Fahey said. “They had 21 second-chance points. It was a barrage in the third and fourth quarter. I just shot them straight, that’s what the message was. It was a winnable game if we boxed out.”

Next on the docket for the Illini is a road trip to Columbus as they take on the Ohio State Buckeyes on Thursday.