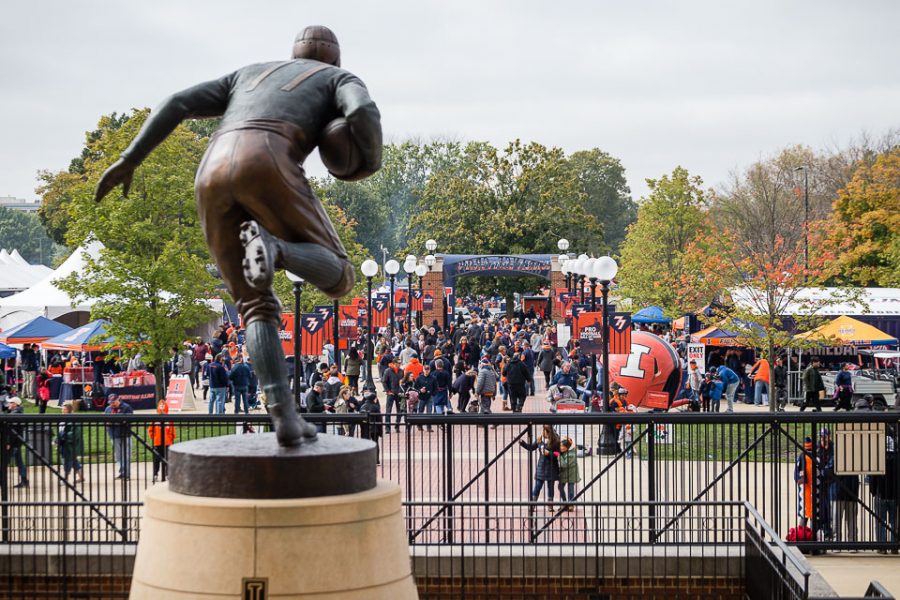 Illini football fans fill Grange Grove before the game against Purdue at Memorial Stadium on Oct. 13. Thad Ward, Illini running back coach, is saying farewell to Illinois to work at Temple University.

After two years with the Illini running back coach and creator of Illinois’ “Littyville” recruiting slogan Thad Ward is leaving Illinois to pursue a job at Temple University as a receiver’s coach, according to footballscoops.com

Ward came to Illinois in March of 2016 after coaching at Northern Illinois University with recently hired Temple head coach Rod Carey for three seasons and a one-season stint at Western Michigan University in 2012. During his three years at NIU, Ward aided to a 31-11 record, including three bowl appearances (Poinsettia Bowl 2013, 2015, Boca Raton Bowl 2014).

At WMU, Ward helped develop key players for the Broncos, including wide receiver Jaime Wilson, who was WMU’s No. 1 receiver and a contender for the Mid-American Conference Freshman of the Year award.

Before making the move to Western Michigan, Ward finished a season as the wide receivers coach and passing game coordinator at Gardner-Webb, a private university in Boiling Springs, North Carolina. Ward also spent six seasons at Western Illinois from 2005-2010 as a running back coach. During his time with the Leathernecks, Ward led WIU to an FCS Playoff appearance.

At Illinois, Ward not only worked with sophomore Mike Epstein prior to his season-ending injury in 2017, but in 2016 he also helped Kendrick Foster to a No. 3 ranking in the Big Ten in yards per carry. Ward has also coached freshman Reggie Corbin, and the Maryland native finished 14th in the nation in yards per carry among freshmen, producing the best performance by an Illini freshman since 2000, according to fightingillini.com.

This story will be updated when more information becomes available.