Illini set to square off against reeling Nebraska 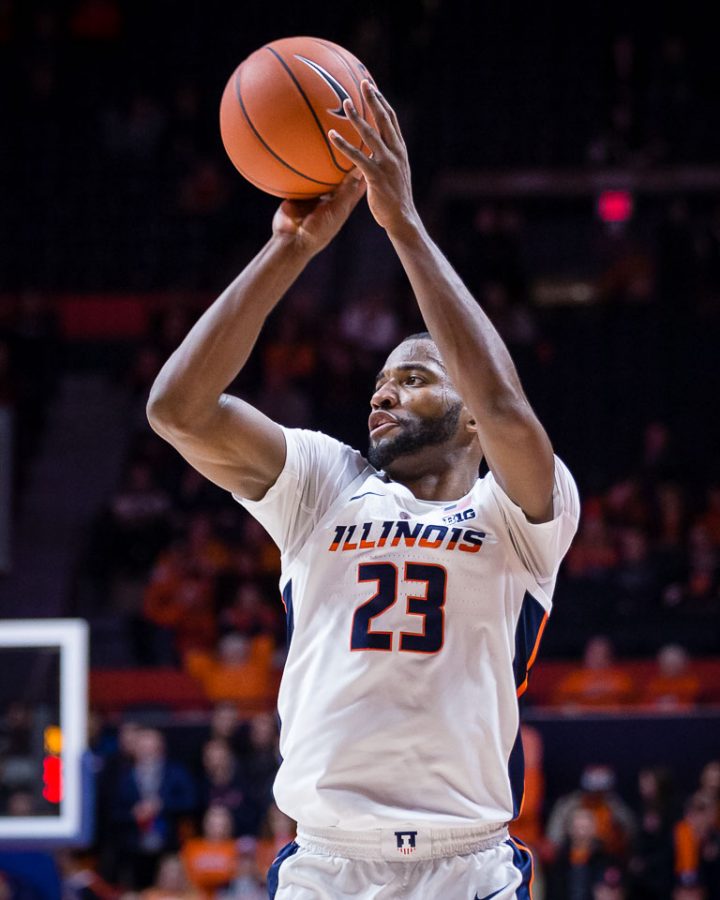 Illinois guard Aaron Jordan (23) shoots a three during the game against Wisconsin at State Farm Center on Wednesday, Jan. 23, 2019. The Illini lost 72-60.

For an Illinois team that is just 1-11 away from the State Farm Center this season, hosting a floundering Nebraska on Saturday — a side that has lost its last four games —  is a welcome reality.

Nebraska (13-8, 3-7 Big Ten, 10th place) is coming off a home loss to No. 24 Wisconsin after losing second-leading scorer and fifth-year senior Isaac Copeland for the season because of a torn ACL suffered in a 70-60 loss to Ohio State on Jan. 26.

Copeland was averaging 14 points and 5.4 rebounds per game for the Cornhuskers. Against Illinois on Dec. 2, Copeland went 6-of-9 (1-of-1 3FG) with five rebounds for 16 points.

Illinois head coach Brad Underwood noted the seriousness of the loss for Nebraska.

“Copeland (injuring) his knee is a big loss for them,” Underwood said. “It’s one of those things that you hate to see, a fifth-year senior.”

But the Cornhuskers still have red-hot senior James Palmer Jr., who is second in the Big Ten in scoring with an average of 19.1 points per game.

The 6-foot-6 guard tore up Illinois in the earlier meeting in Lincoln, scoring 23 points, although he went only 4-of-12 (3-of-6 3FG) from the field. Palmer reached the charity stripe 14 times, knocking down 12 free throws while also racking up four assists and three rebounds.

Underwood lamented the early-season loss as his team’s worst performance of the year in terms of how competitive it was on the court.

“We get a Nebraska team that really handed it to us from the opening jump in the first game,” Underwood said. “It’s the one game all year that I didn’t feel like we ever really threatened.”

Illinois shot 40.4 percent in that contest while allowing Nebraska to go 22-of-46 from the field (47.8 percent). From the jump, they never led, falling behind 13-2 in the opening four minutes.

But Underwood thinks he’s got a much different team to work with this time around.

The rotation looks different, too, with guys like Tevian Jones playing much more — he was suspended for the first meeting — and Kipper Nichols playing less than 10 minutes per game recently (the redshirt junior hasn’t scored in his last five games).

Then, freshman forward Giorgi Bezhanishvili led the way for the Illini with 6-of-8 shooting for 14 points. Nichols was the second highest scorer, with 12 points in 24 minutes.

Young guards Ayo Dosunmu and Trent Frazier struggled throughout the game, with Dosunmu scoring 10 points on a poor 3-of-12 (2-of-4 3FG) shooting performance. Frazier played a team-high 36 minutes but only took one three — he missed — and scored nine points on a 3-of-7 shooting clip.

“Offensively, we didn’t have much of our ball screen stuff in yet; we’ve developed there a great deal,” Underwood said. “It was probably the one night that Ayo looked like a freshman; he didn’t have a good night. It was tough all the way around, but you’ve got to give Nebraska a lot of credit. They played with a tremendous amount of energy and emotion in that game. It was game one, and I’ve said it many times, but we’ve been a better team month by month. We’re a lot better (of a) basketball team than when we faced Nebraska the first time.”

That claim will be tested Saturday against a Cornhuskers squad that has been less threatening without Copeland yet remains a very strong defensive team (No. 37 in adjusted defensive efficiency, according to Kenpom).

And the Cornhuskers have been no slouch offensively — though the Copeland injury hurts— as Kenpom rates them No. 25 in adjusted offensive efficiency and No. 23 overall.

Contrarily, Illinois, rated No. 86 by Kenpom, comes in with the No. 108 and No. 85 offensive and defensive efficiency ratings, respectively.

The Illini had several apparent lapses on the defensive end against Minnesota — and Underwood was disappointed with the Dec. 2 defensive performance — because of miscommunication, or a lack of it.

That’s going to be key to pulling out a win in the first Saturday Big Ten game at the State Farm Center in almost two years (a loss to Penn State on Feb. 11, 2017), Underwood said.

“Quiet teams lose,” Underwood said. “I wish I could find a way, maybe put it in a rap song, I don’t know, who knows? In this league, everybody capitalizes on your mistakes. Just a simple calling out a ball screen, whether it’s a guard-on-guard ball screen; it’s an easy switch. It’s something we’ve practiced since June 6. And yet, having the recognition to understand that and see that and make that call becomes a problem. It rears its head at some of the worst times.”