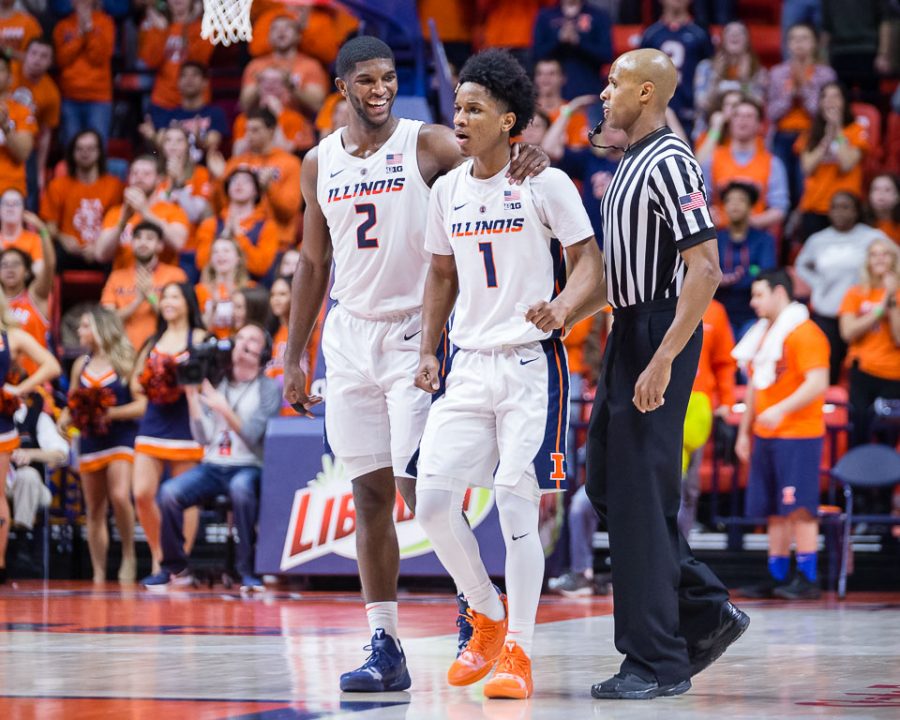 Illinois guard Trent Frazier (1) celebrates with forward Kipper Nichols (2) after hitting a three during the game against Nebraska at the State Farm Center on Saturday. The Illini won 71-64.

After five-straight games without a bucket and seeing his time on the court evaporate over the stretch, Nichols burst out for a team-high 18 points to lead Illinois to a home win over a Nebraska team that has now lost five in a row.

The Cleveland native got going with 10:56 remaining in the first half, fading away on a turnaround jumper near the baseline.

The State Farm Center roared with approval as the ball finally went down for Nichols, who hadn’t seen the ball go through the basket since he scored nine points in a home loss to Michigan on Jan. 10.

“I’m really happy for Kip,” said head coach Brad Underwood. “Really took the approach to almost coach him like he wasn’t a member of our team. And I don’t mean that in any way, I really left him alone. I thought maybe he had a few too many people in his ear, including me. He’s resilient, he’s never stopped being a great teammate (and) he’s never stopped being a great locker room guy.”

At the 9:05 mark, he nailed a three, then got one to go from inside to cap a 7-0 solo scoring run that gave the Illini a 23-18 lead they would never relinquish.

Early in the second half, the redshirt-junior drove to the basket, scoring and drawing a foul as the shot clock wound down. Then he forced Nebraska’s Isaiah Roby into a turnover on the defensive end, causing Cornhuskers head coach Tim Miles to use a timeout.

Out of the timeout, Nichols dropped a pass and turned the ball over but then made a solid pass to Andres Feliz in transition, who laid it in to put the Illini up 15 with 16:57 to go — their largest lead of the day.

“As basketball players, it happens,” Nichols said. “You’ve got slumps, mentally. Shots not going in, offense that’s fleeting, it comes and goes. The thing that’s most important is locking in on the defensive end. The greatest basketball players make plays, whatever it may be.”

Ahead of the game, it looked to be a matchup where whichever team that had the better guard play would come out on top.

Perennial thorn in the Illini’s side Glynn Watson Jr. and leading scorer James Palmer, who came in averaging 19.1 points per game (second in the Big Ten), would be tough matchups for Trent Frazier and Ayo Dosunmu.

Palmer got his points, scoring 22, but needed 20 shots to do so, only making six of those.

Watson Jr. was harassed all night by the Illini defense, going 3-of-12 for just six points.

“I thought by far and away, from a defensive standpoint, it was our best all-around game defensively,” Underwood said. “We really challenged our guys with Watson and Palmer. We had to make Palmer’s touches hard. We didn’t in the first game.”

“I thought we had them sped up, out of sync,” Underwood said. “Then we just did a tremendous job on Watson. Trent was off the chart in the first half, defensively. He got a couple fouls, but then Dre came in and our pressure went really, really good.”

Dosunmu struggled in the Dec. 2 meeting at Nebraska, shooting 3-of-12 for 10 points. He dealt with foul trouble throughout and only played 22 minutes, well below his 30.8 per game average.

Though he didn’t dominate offensively on Saturday, the Morgan Park product had a solid 6-of-14  shooting performance while being part of a defense that plagued the Cornhuskers’ normally reliable guards.

“It’s all about watching film,” Dosunmu said. “I feel like I’m a much different player than I was when I played them (last). I wanted to get this win because that was my first Big Ten game and I feel like they got me physically, they got the team and it overwhelmed us.”

The Illini are 7-15 and barring a miracle Big Ten Tournament title, the team will be left out of the postseason.

Nevertheless, month-to-month, Illinois has improved, winning two of its last three, including the first-ranked win of the Underwood era over then-No. 13 Maryland and has been competitive in all but two or three games.

Underwood went even further than saying things are getting better after the win on Saturday.

“I don’t want to say anything in a negative light about last year, but we’re light-years ahead in terms of our locker room, our competitive spirit and fire,” Underwood said.

The season still has a long way to go, but many signs point to Illinois being better than its 7-15- 3-8 Big Ten-record indicates.

Kenpom rates the Illini as having the third toughest schedule in the country. Add that to the No. 349 rating for luck — an admittedly strange stat — and things look brighter for Underwood and Co., despite the reality of a soon-to-be sixth-straight missed NCAA Tournament.

And the team is young.

Lone senior Aaron Jordan has been good at times, but on Saturday, he missed all three of his shots, all three-point attempts and scored no points.

He added five rebounds and had a team-high plus-15 plus-minus, but it’s an encouraging sign this team’s best players are freshmen and sophomores.

“We’re getting better in our roles. I don’t want to say we’re defined yet,” Underwood said. “That’s been part of the challenge with Tevian out, it’s been part of the challenge with Kipper’s struggles. Finding the pieces that all come together. I say I  love the locker room and we keep working, we keep doing that. You throw (Feliz) in that mix, you throw Adonis (De La Rosa) in that mix, and I’m starting to have some comfort.”

Underwood has dealt with some rough moments and many close, frustrating losses this season.

But Saturday’s win offered proof of the claims he’s been trying to sell the fan base and media: his rebuild is taking shape around this young, promising core.

“These guys are eager,” Underwood said. “Our mistakes are a lot of youthful, inexperienced mistakes. I think we’re growing. I think you see it every day when you see a Tevian (Jones), when you see an Alan (Griffin), a guy like Kipper who’s been struggling come back and obviously Ayo and Giorgi (Bezhanishvili) have proven that they can do it against the best in the country.”