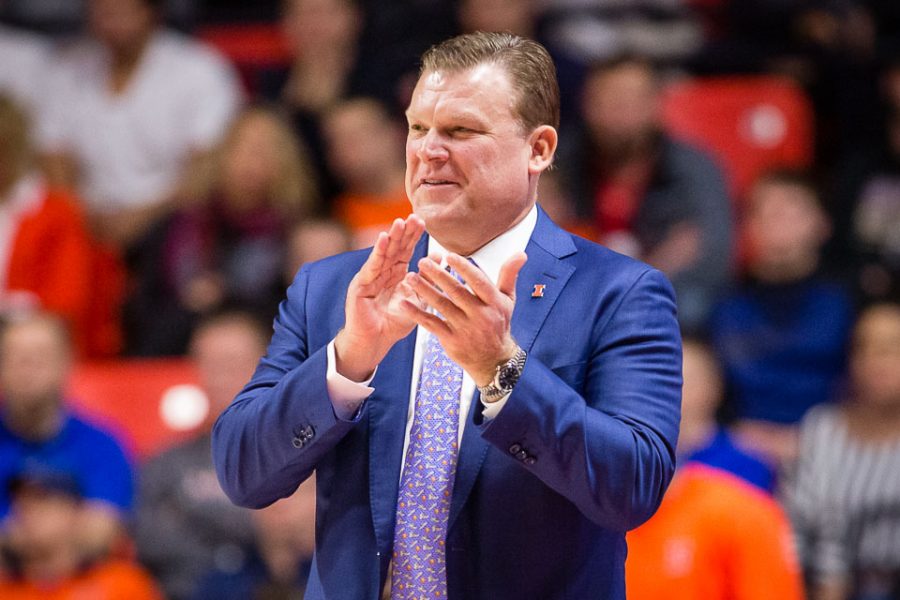 Illinois head coach Brad Underwood reacts to action on the court during the game against Wisconsin at State Farm Center on Wednesday, Jan. 23, 2019. The Illini lost 72-60.

Illinois has won two of its last three games to pull within one Big Ten win of its four-win conference total last season, but with No. 9 Michigan State coming to town on Tuesday night, hitting that mark won’t be easy.

And the Spartans (18-4, 9-2 Big Ten, T-1st place) are coming off two straight losses at Purdue and at home against Indiana over the weekend.

“We’re going to see an angry, tough-minded Michigan State team come in here,” head coach Brad Underwood said. “I expect them to be at their best. I think Tom (Izzo) will probably have their attention.”

Illinois has shown measured progress over the last month, torching Minnesota at home, knocking off No. 13 Maryland at Madison Square Garden, then on Saturday with a 71-65 win over Nebraska.

But Michigan State has a loaded roster that includes the likes of superstar guard Cassius Winston, who is averaging 18.8 points per game (fourth in the Big Ten) and 7.3 assists per game (first).

Winston also leads the Spartans in three-point percentage (45.4 percent) three’s made (59) and steals per game (1.2).

“They’re on the Cassius Winston train,” Underwood said. “Cassius is probably having an MVP-caliber year. You look at his numbers, you look at what his meaning is to that team. Extremely impressed with the fact that (they average) 20 assists per game, is an extraordinary number. That’s facilitated mostly by him.”

Frazier and Co. have had some success against some of the league’s premier guards; Maryland’s Anthony Cowan scored 18 but did so on 4-of-10 shooting, and Nebraska’s Glynn Watson Jr. went 3-of-12 from the field for six points before fouling out.

Underwood believes his team has been much better defensively overall, led by improved play on the perimeter.

Kenpom rates Illinois as No. 78 in adjusted defensive efficiency, an improvement of 51 places, after finishing No. 121 in the category last season.

“One, we’re much better on the perimeter,” Underwood said. “I looked at a stat the other day, our post touches are way down. We were really good in that area last year. They’re way down because our perimeter defense is better. We’re better on the wing spots defensively.”

That defensive improvement coincides with the Illini being ranked No. 75 overall by Kenpom despite their 7-15 record.

Underwood believes his team is making steady improvements, though the record doesn’t show for much. Illinois has played the second-toughest schedule in the country (Kenpom) behind No. 13 Kansas.

“I want to get where, if you ask coaches and players in the league, ‘Who’s the toughest team in the league?’ I want them to say Illinois,” Underwood said. “We’re striving for that. That’s not just physically, that’s the effort, and so on and so forth.”

Despite the team’s difficulties this season, Underwood claimed the locker room has remained a positive place.

He singled out redshirt-junior Kipper Nichols as a prime example of guys having the right mindset regardless of their or the team’s situation.

Nichols saw his playing time whittled down over a five-game scoreless stretch before breaking out for 18 points against Nebraska.

“A guy like Kip, it would’ve been real easy for him to go the other way,” Underwood said. “Yet, that guy was the happiest guy in the locker room in New York, he was a guy that was cheering guys on in the Minnesota game. His time’s come back around. That’s starting to be culture for me there. That’s a big word for me, culture.”

Last season, Nichols exploded for 27 points in a loss to Michigan State.

Underwood and the Illini would love nothing more than to see that type of production once again on Tuesday night from the suddenly reignited Nichols.