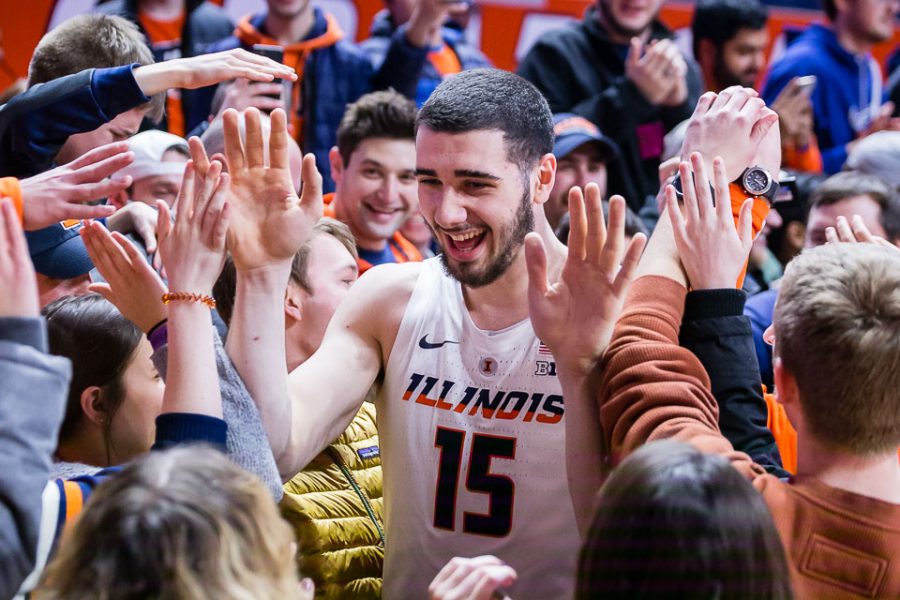 Thanks to freshman Giorgi Bezhanishvili’s record-breaking performance, the Illini were able to do just that, beating the Scarlet Knights 99-94.

Bezhanishvili played like a Big Ten star, scoring 29 points in the second half and overtime alone.

He would finish the game with a career-high 35 points, breaking the record for most points scored by a freshman, which was previously held by Deon Thomas, who scored 34 points in one game in 1990.

“I didn’t know about the record,” Bezhanishvili said. “It just happened. I was just feeling good playing basketball, and it just happened. I think it’s great. It’s a great feeling. But that’s not what it’s about. We’re focused on the next game, Ohio State.”

Bezhanishvili remained unaware of his record-breaking performance until he met with Thomas on the sideline during the postgame. The Illini legend broke the news to the freshman and he had a simple response:

After the game Giorgi B heads over to #Illini great Deon Thomas.

A passing of the torch as Giorgi puts up the best scoring performance by an Illini freshman (35pts) and breaks Thomas’ record (34pts).

To start the game, freshman Ayo Dosunmu picked up where he left off against Michigan State. The guard scored four quick points, two of which came on a fast-break dunk.

The rest of the Illini failed to click right away, but after a short run that allowed Rutgers to tie the game at seven apiece, sophomore guard Trent Frazier followed Dosunmu’s lead, hitting two threes to put Illinois back in the driver’s seat.

But it was not until the bench unit came in that Illinois started to find itself. Andres Feliz provided a quick layup while drawing the foul, and senior Aaron Jordan had a dunk of his own.

Despite the offensive spurt, the Illini struggled with the Scarlet Knights’ size as Rutgers went on a 9-0 run to take the lead halfway through the first.

The Illini climbed back to regain the lead, but they struggled to pull away with Rutgers trio of Caleb McConnell, Montez Mathis and Ron Harper Jr. scoring 20 of Rutgers’s first 27 points.

With about 3 minutes left in the half, the Illini offense fell into a cold streak, and Rutgers took advantage. The Scarlet Knights made six of seven and took a 45-42 lead into the locker room.

“Pick a game, having leads in the second half and having the opportunity to close games, (we) miss shots or miss free throws or not get a stop,” Underwood said. “And at some point, you sharpen the knife enough it gets pretty sharp then you start doing some of those things and start executing.”

The second half started positively for the Illini, as Trent Frazier knocked down a three for the first shot of the half to even the game. Bezhanishvili then put up four quick points of his own to give the Illini a 49-47 lead.

However, as the half moved on, it was tough for Illinois to make much of their possessions. Not to mention, guards Ayo Dosunmu and Trent Frazier both fell into foul trouble, having four and three respectively with twelve minutes left.

But thanks to Bezhanishvili, the Illini were more than fine.

The big man had a tip-in that drew a foul, and the freshman center gave the Illini a 72-65 lead after hitting the free throw.

He didn’t look back from there.

As Bezhanishvili was on his way to 29 second-half point, he got some help from veteran senior Aaron Jordan in crunch time.

With two minutes left and Ayo Dosunmu driving, the point guard fired a pass across the court to an open Jordan, who drained the three to give Illinois an 85-82 lead with 1:40 left.

However, a quick put-back by Caleb McConnell made it 85-84 Illinois with 24 seconds left, giving the Illini a chance to finish it. Unfortunately for the Illini, Ayo Dosunmu only hit one of two, and Ron Harper Jr. made a jumper on the other end to tie the game at 86 and send the game to overtime.

“How much we’ve matured over time and over the course of this season, we knew we were gonna take those punches. When the game went to overtime we said good. ‘Cause we’re built for this.”

The overtime period started with four points from the Scarlet Knights to give them a 90-86 lead, but Bezhanishvili answered with a layup followed by a Frazier three to make it 91-90 Illinois.

Caleb McConnell made yet another jumper to make it 92-91 Rutgers, but it was Bezhanishvili to the rescue again as he hit two free throws and a hook shot in the post to give Illinois a 95-92 lead with 1:41 left in overtime.

Illinois was then able to finish things at the line. Andres Feliz hit two with 52 seconds left, putting Illinois up 97-92 and the game out of reach. Rutgers was forced foul the rest of the way and the Illini won 99-94.

“In a night when Ayo, Trent are fighting some foul trouble, we got on the big boy’s back and rode those shoulders for 29 second-half points, and his efficiency was needed, 14-18 from field,” Underwood said. “Congratulations to him breaking a nearly 30-year-old record. That’s pretty special.”

Next up, Illinois travels to Columbus on Thursday to take on the Ohio State Buckeyes.