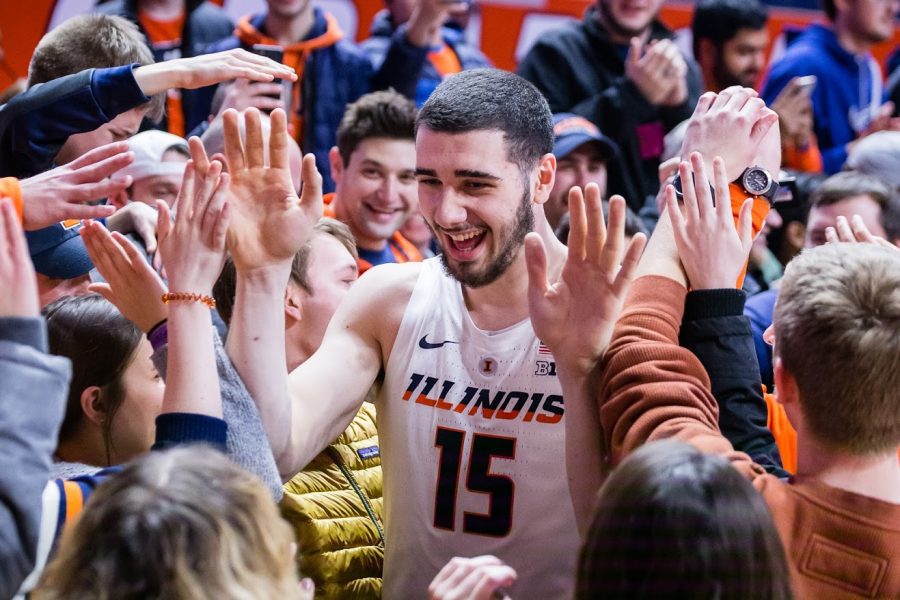 To be clear, the heads are turned due to the oversized 7-foot frame waving side-to-side on a black-bike: his Lambo.

Bezhanishvili does not hesitate to talk about his prized possession, commenting at length about it only a couple weeks ago in an interview with Big Ten Network.

Quite frankly, Bezhanishvili does not hesitate to talk at all.

In his first appearance at the postgame podium on Nov. 8, the player went on a long rant about his infatuation with the sport of basketball, one that started thanks to hoop mixtapes on YouTube.

Those mixtapes were watched in the country of Georgia and sparked an interest great enough to get the big man off the internet and onto the court.

From there, he wound up in Champaign, Illinois, roughly 6,000 miles from his homeland.

What’s different about Bezhanishvili isn’t his impressive touch around the rim and a hook shot that might even make Magic Johnson raise an eyebrow.

Instead, the Georgia-native is different because of the story he is telling.

The relationship fans have gotten to witness Bezhanishvili have with Illinois basketball is as romantic as the tango.

If need be, you can finish that above sentence with the dance of your choice. After all, Bezhanishvili mastered the rumba, salsa, samba, cha cha and several more during his youth.

An infectious smile can rest front and center as he turns toward the fans during each game. Moments later, that same smile can turn flat, as a focused face locks into an opponent.

Every post move is fluid, every fan interaction is sincere and every interview is enjoyable.

Whether he is putting on a paper-made hat gifted to him by the Orange Krush student section or squatting ferociously into a ready position during the game, you can tell Bezhanishvili simply loves basketball and Illinois.

While young love is hard to get in front of, it can also make you do some pretty crazy things. For example, putting up 35 points to break the single-game Illini freshman scoring mark is insane.

Also, how about averaging 14 points per game in Big Ten play after being the 370th ranked recruit in the country and only getting two power-5 offers?

By no means am I calling this a Cinderella story. Who knows if a glass slipper could even support the big man? But the relationship unfolding before all of us between Bezhanishvili and the sport of basketball can pull even the tightest of heartstrings.

Continuing to watch the Bezhanishvili journey will be one of the most exciting Illinois basketball storylines.

Who knows, it’s quite possible that if he keeps playing like this, Bezhanishvili may be pulling up to an NBA arena near you in a new Lambo.

Possibly a much bigger, more expensive one.