Carr wrestles with ambitious goals on and off the mat 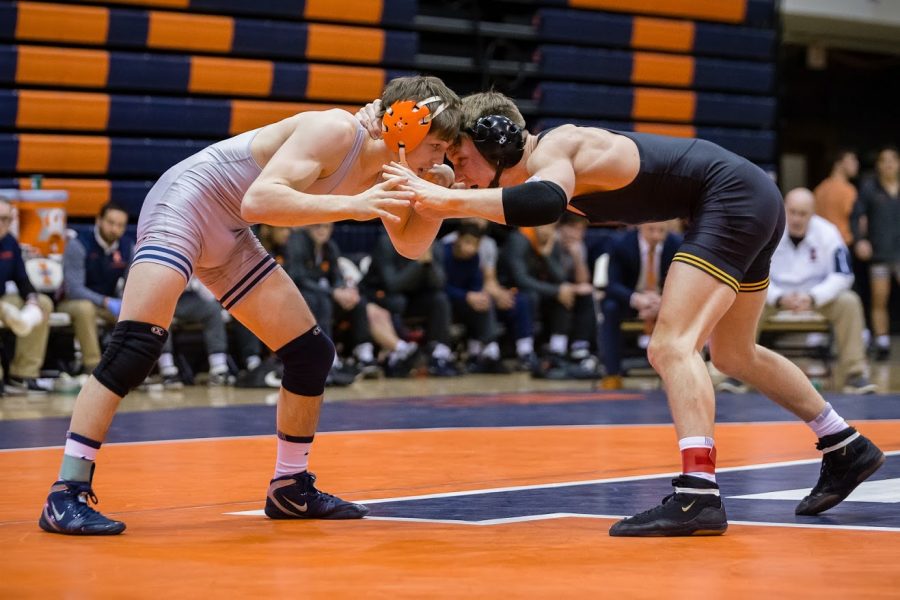 Mike Carr, 141-pound redshirt sophomore, hasn’t lost a match since he competed in the Cliff Keen Invite at the beginning of December. Since then, Carr has won six times with three of those wins coming against ranked opponents.

Carr has had plenty of success in his three seasons wrestling for the University, but his passion for wrestling started at his home in southwest Pennsylvania.

“Growing up in Pennsylvania, that is something we all did,” Carr said. “We were all wrestlers. In lower-middle income families, that was the sport to do. What made it so special was that our particular area, southwest Pennsylvania, is the wrestling hotspot of Pennsylvania.”

Pennsylvania is regarded as one of the best wrestling states in the country, and Carr credits his success from the competition he was able to see in high school. Carr stood out in his home state, winning two state titles in his high school career while going 89-0 over his junior and senior seasons.

Carr found his fit at Illinois and was expected to be an instant impact wrestler, but he hit adversity his freshman year when he suffered a season-ending knee injury.

However, Carr saw a silver lining from that injury.

Even though it was hard to get back in shape, the break gave Carr a chance to freshen up and prepare to come back strong after high school. When Carr did return, he went 20-7 in his redshirt freshman season, placing 2nd in the Big Ten tournament while qualifying for the NCAA tournament.

“It’s very typical of him in terms of the work ethic,” said head coach Jim Heffernan. “I mean that’s really what attracted us to him as much as anything. The kid is willing to put in the work and likes to work and challenge himself all the time. Coming back from surgery is not easy. It was the first major surgery he had so it took a lot of time, but his attitude was great. The kid loves to compete, so he did everything he possibly could to get himself ready.”

Carr is not only one of the best wrestlers in the country, but he is also a student-athlete that performs great in the classroom. Last season, Carr was awarded for his academic success by becoming an NWCA all-academic wrestler.

Carr is majoring in molecular biology and is on the pre-med track. After he graduates, he plans on going to medical school and becoming a doctor. He puts a lot of time into his academics because he sees them as the key to pursuing his dream.

Through his success on the mat and the classroom, Carr has become a leader for the team, and his impact is seen throughout the program.

Carr has set himself up for a successful career wrestling already at Illinois and still has two seasons after this one to compete. Even though Carr has time, he wants to win this season and has his sights set on a national title in March.