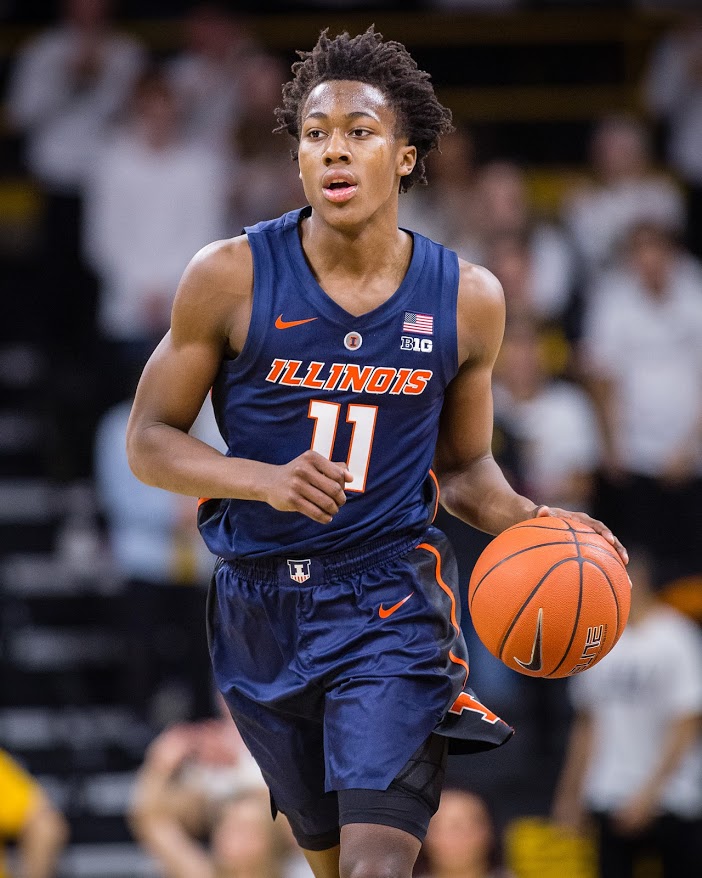 Illinois guard Ayo Dosunmu (11) brings the ball up the court during the game against Iowa at Carver Hawkeye Arena on Sunday, Jan. 20, 2019. The Illini lost 95-71.

Illinois basketball is on a roll.

The Illini defeated Ohio State in Columbus on Thursday night, winning against the Buckeyes on the road for the first time since Feb. 22, 2009, when they won 70-68.

Defense paved the way, something Underwood had emphasized since the team’s overtime win over Rutgers last weekend.

The Buckeyes turned it over 18 times, allowing the Illini to score 14 points off turnovers, while also adding 11 points in transition.

Ohio State (16-8, 6-7 Big Ten, 7th place) came into the game on the back of three-straight wins of its own, beating Rutgers, Penn State and Indiana in the past two weeks.

It was a one-possession game with under a minute left, but after two Ohio State free throws, freshman Dosunmu pulled up to nail a deep, NBA-range three-pointer to ice the Buckeyes.

The play was similar to how he sealed the win over No. 9 Michigan State with two late three’s.

The Illini hit five of their last six shots, starting with a major Dosunmu three to put them up 51-46 with 5:15 remaining, and Ohio State stumbled to the finish, only converting four of its last 18 attempts from the field.

Senior guard C.J. Jackson led the way for Ohio State, shooting 4-of-9 (1-of-1 3FG) and adding five rebounds, although he turned the ball over seven times.

He and Dosunmu had a scrappy defensive affair on the night, though Dosunmu only turned it over twice.

Frazier suffered what looked to be a potentially serious knee injury after driving into the paint and coming into contact with Ohio State forward Kaleb Wesson with 2:29 to go in the second quarter, limping off the court and holding it in pain until the half.

He trotted gingerly into the Illinois locker room, but came sprinting out, evidently ready to go once more in the second half.

Frazier added five points in the half, but it was Bezhanishvili who once again put the team on his back down the stretch.

The reigning Big Ten Player of the Week followed up his record-breaking 35-point performance against Rutgers with 13, but 11 of his points came in the second half.

The Georgian product went 5-for-6 from the field and he also gave Ohio State big man Kaleb Wesson problems, eventually contributing to his fouling out with 2:19 left in the game.

Bezhanishvili also blocked a career-high four shots. Before, he had not eclipsed two blocks (though he’d done it twice).

Illinois had six blocks collectively, tying a season-high set against UNLV back in December.

Freshman wing Alan Griffin saw a career-high 16 minutes of court time, but struggled to get in rhythm, shooting 1-of-7 (0-of-4 3FG). Griffin scored two points on a bucket in the first half and did haul in four rebounds and two steals.

He also had no turnovers, but fouled Duane Washington with 8:30 to go, allowing the Buckeyes to take a 45-44 lead with 8:28 to go after Washington hit the ensuing free throw.

Before Thursday, Illinois was 1-15 in away games under Underwood.

The win in Value City Arena is something of a rare variety in program history, marking only the third time Illinois has ever won there.

After losing 12 of the first 16 games this season, Illinois has gone 6-3 over the last month, kicking things off with a win over Minnesota at the State Farm Center on Jan. 16.

Illinois is now 2-11 away from the State Farm Center this season, notably beating No. 13 Maryland at the Madison Square Garden on Jan. 26 to start the team’s hot run.

The Illini are the hottest team in the Big Ten, winning their last four (three-straight wins for Iowa).

Illinois will look to snap the longest losing streak it has against any opponent at Wisconsin next Tuesday, having lost 14-straight to the Badgers.