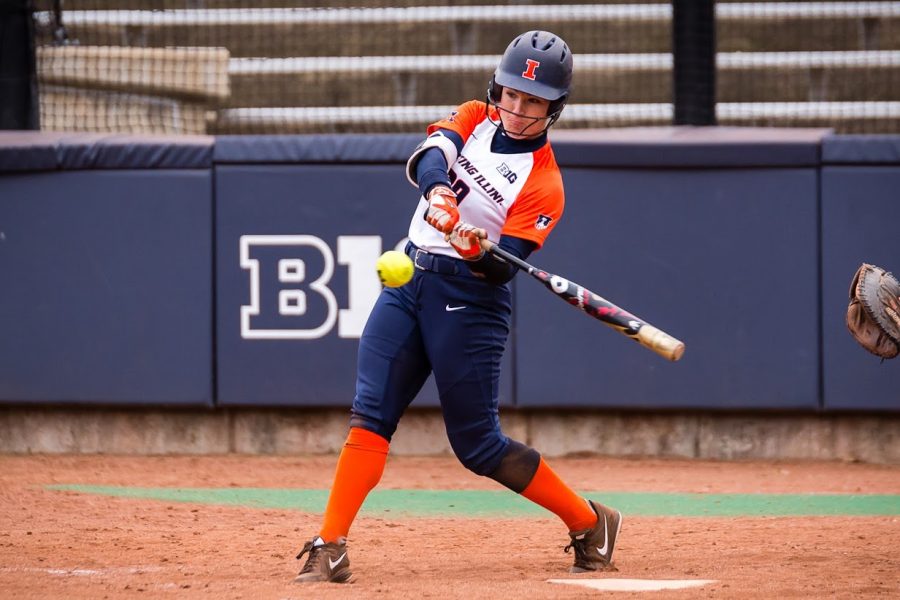 Illinois infielder Annie Fleming (99) swings at the pitch during the game against the University of Wisconsin-Parkside at Eichelberger Field on Saturday, Sept. 29, 2018. The Illini won 8-0.

It was a “peachy keen” weekend in Georgia for Illinois softball as the team swept Boston College and Georgia Tech to improve its record to 7-2.

Over two games, the Illini outscored the Eagles 19-6, which included a 12-3 run-rule victory in game one. Despite a rain delay during game two on Friday, Illinois bested Georgia Tech 15-10 and later closed out the ACC/Big Ten Challenge by outpacing Georgia Tech 7-3.

During Friday’s matchup against Boston College, Illinois scored in each of the first four innings. Sophomore catcher Bella Loya picked up a run batted in in the first, sending senior left-fielder Carly Thomas home to make the score 1-0. First baseman Maddison Demers also picked up an RBI on a single, sending senior third baseman Annie Fleming in to score. A sacrifice fly from senior second baseman Alexis Carrillo closed out the first, allowing Loya to reach home plate while giving Illinois a 3-0 lead.

The Illini totaled 14 hits in the tournament opener, which included a three-run homer off the bat of senior Carly Thomas.

On the mound, freshman Sydney Sickels continued the hot start to her debut season by allowing only one earned run on two hits while striking out two in three innings. Finishing out the last two innings for the Illini was senior Taylor Edwards, who walked two and allowed only one run.

Friday evening, Loya continued Illinois’ offensive surge with a two-run home run, her fifth dinger of the season. She was joined by Carrillo, who notched her third career home run before the game was called in the top of the sixth because of rain.

Sickels picked up a second win after relieving senior Emily Oestreich, pitching 2.1 scoreless innings while limiting Georgia Tech to one hit and one walk during those frames.

The Illini’s second meeting with the Eagles started off Saturday’s competition.

Two fielding errors from Illinois allowed Boston College to lead 2-0 after the top of the first. The Eagles’ unearned runs were answered by Fleming, who knocked one deep to right field to give the Illini a run back. A quiet second inning was followed by an action packed third, with three Illini registering 2-RBI singles, enough to give Illinois a 7-2 lead. The Eagles scored in the fourth but failed to get any further as the Illini won by a final score of 7-3.

Oestreich was in the circle for all seven frames, throwing 89 pitches and striking out four while allowing only one earned run.

Illinois and Georgia Tech faced off once more to close out the weekend. Unlike their Friday-evening matchup, the two teams played all seven innings, enjoying clear and cool weather throughout the two-hour game.

Fleming hit her second home run of the day and was joined by Thomas and Wingerter to round the bases against the Yellow Jackets.

It was an evening of ups-and-downs in the circle for Sickels, who allowed three runs but also pitched back-to-back strikeouts in the top of the sixth after a Georgia Tech solo homer. However, the Illini held on for a 7-3 victory.

The Illini will be on the road once again next weekend, heading south to Mobile, Alabama to compete against Hofstra, South Alabama, Nicholls State and Stephen F. Austin.