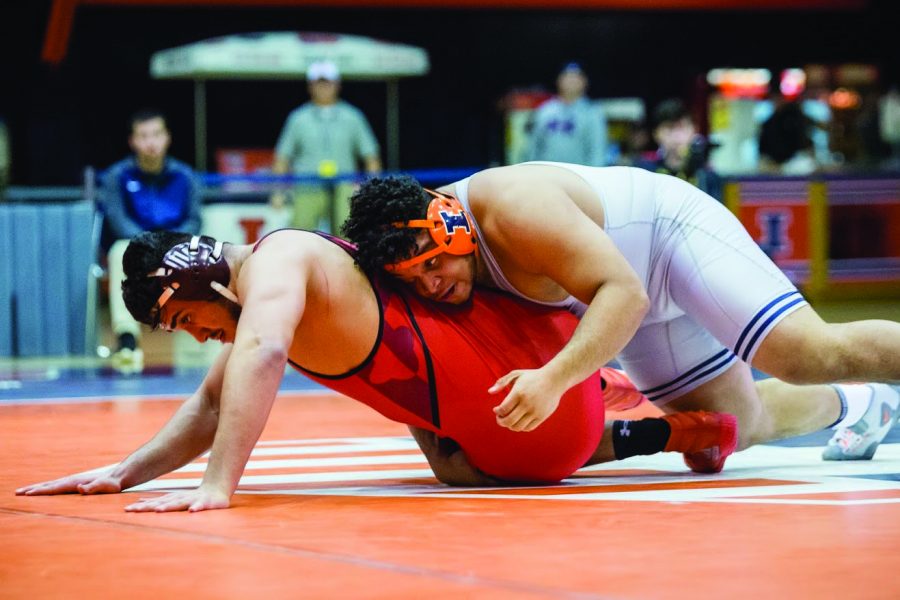 Illinois’ Deuce Rachal wrestles with Maryland’s Youssif Hemida in the 285-pound weight class during the meet at Huff Hall on Jan. 28. The Illini won 25-18.

In the Illini wrestling practice room in Huff Hall, there is a wall overlooking the mats. It is decorated with images of Illini All-Americans like Isaiah Martinez, Jesse Delgado and Matt Lackey.

The wall serves as a celebration of Illini wrestling history but also as motivation for the current wrestlers, especially those the Illinois wrestling program will say goodbye to come May. Three integral seniors, Emery Parker, Andre Lee and Deuce Rachal, will all be graduating and completing their collegiate wrestling careers.

“It’s a goal to get up there in my final season,” Lee said. “We’re one of the few programs that consistently had All-Americans and have consistently been top-ranked and just the culture of continuing that legacy. I think that’s what it means for me (to wrestle for Illinois).”

The trio have each had an important impact on the mat during their time wrestling for the Illini. All have individual accomplishments which have helped maintain the Illinois wrestling program’s country-wide reputation.

Last year alone, Parker was an All-American at 184 pounds, Rachal pinned No. 5 Austin Myers from Missouri to start the season and Andre Lee was a Big Ten Sportsmanship honoree while compiling 10 wins.

“It’s bittersweet, in a way,” Lee said when asked about last season. “Once I got here I devoted so much time and effort into just trying to be my best self. It has definitely had an impact on me. I’m grateful for everything that I’ve learned from wrestling. It’s helped me in all aspects of my life. It’ll be nice to see what happens when wrestling is done and how it translates into life. But all those super hard workouts and injuries and bruises, I think I’ll be okay with not having that.”

The seniors want their legacy to simply reflect the hard work they put in. When new wrestlers enter the program, Lee wants them to see how hard his class worked in hopes they will do the same.

With that being said, the seniors appear comfortable and confident that the program is being left in good hands. The team has younger talent like No. 4 redshirt sophomore Mike Carr, the Braunagel twins, Matt Wroblewski and Justin Cardani, who are all expected to emerge as leaders for the team in the upcoming years.

“Our young guys are a good group of kids,” Rachal said. “They work hard and they’re excited to be here, so I only see good things and a lot of success in the future for our growing team. We’re losing three seniors, but we have a lot more people jumping into the lineup.”

Even though the seniors are coming up on their last half of collegiate career competition, there is still much left to do, especially with the team’s last dual meet being against current-No. 1 Penn State at home.

Illinois will be the underdogs, but the seniors feel anything can happen as they look to defend Huff Hall one last time. After Penn State, the team has the Big Ten Tournament and the National Tournament.