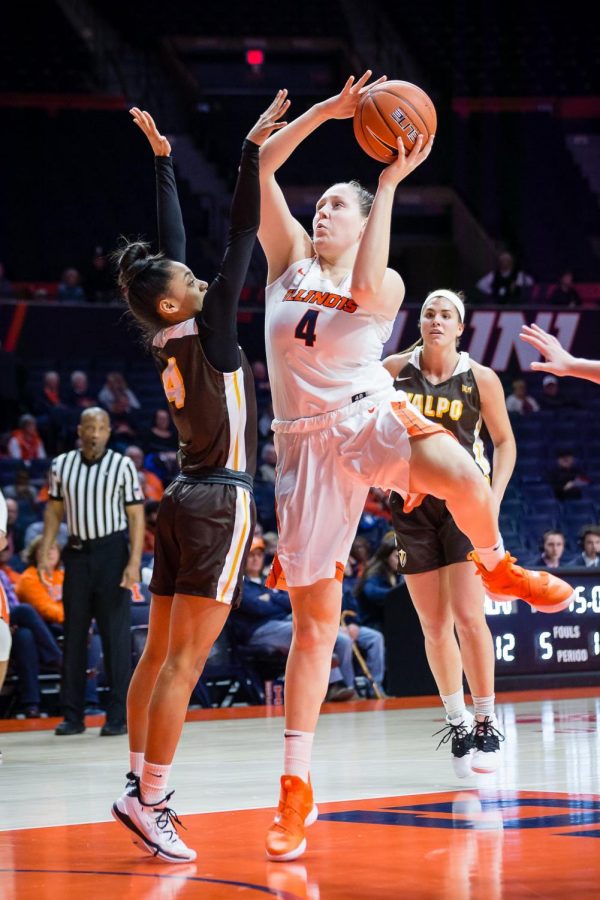 Illinois forward Mackenzie Blazek (4) jumps up to shoot the ball during the game against Valparaiso at State Farm Center on Wednesday, Nov. 14. The Illini won 73-54.

In the annual Play4Kay Pink Game to support breast cancer, Michigan came to State Farm Center riding a five-game winning streak as they took on Illinois.

Though the Illini hung in tight till the half, the Wolverines began to pull away in the third quarter on their way to a 70-56 victory.

As the teams moved into the second quarter, the Illini continued to stagnate on the offensive end, allowing the Wolverines to go on a 14-0 run. After a timeout midway through the quarter, Illinois began running a more uptempo offense, which helped spark a run. The momentum began to shift after guard Brandi Beasley broke a defender’s ankles and dished to a wide open Mackenzie Blazek for three.

“I thought Mackenzie turned a corner tonight, which I thought was big because she’s been working on it,” Fahey said. “I hope (it’s) a step that propels her for the rest of this year and next three.”

Senior Alex Wittinger was also stretching the floor by making both of her three point attempts in the first half. Overall, the Illini shot 6-13 while Michigan shot 5-12. The Wolverines led by as many as 11 in the second, but that soon dwindled down to five as the two teams went into halftime with Michigan leading 29-24.

“In the first half, we did a pretty good job with the double team, which helped nullify (Michigan’s) size advantage,” Wittinger said.

To start the second half, the Illini continued to show the fight that has kept them in games all season long. While the team struggled with turnovers throughout, the difference on the glass was what helped Illinois stay in the game. Most notably, Wittinger notched four offensive boards just in the quarter. There were many situations in the quarter where the Illini were within one possession, but every time they got close, a devastating turnover would occur leading to easy transition points for the Wolverines to extend their lead. Michigan had six points in transition and 12 points off turnovers while Illinois could not score in transition and had just nine points off turnovers.

However, even as the Wolverines piled onto their lead, the Illini simply would not go away, ending the quarter trailing just 49-40.

“We had two turnovers right in a row in the third, and that was it,” Fahey said.

In the final quarter of play, Illinois continued to fight, but turnovers and lack of defensive stops allowed Michigan to stay comfortably in front. The Wolverines continued to get inside the paint and make easy layups. They ended the night scoring 36 points in the paint and shooting 26-53. The Illini offense simply couldn’t match the looks the Wolverines were getting. Often times, the majority of the shot clock was spent behind half court because of Michigan’s tight full court press.

“In the second half, we broke down,” Wittinger said. “The double team was late or we didn’t get the cover down quick enough, and that’s when their size didn’t help finishing underneath.”

The Illini’s toughness was on display Sunday, but ultimately, turnovers and points allowed inside cost the team the game.

“I’m here to keep them focused and … to get (them) better every game. We’re going to be superhuman beings next time we come out,” Fahey said. “I just feel that every time we’ve challenged them, they’ve responded and I have no doubt that they will when they come to practice tomorrow.”

Illinois will travel to Madison, Wisconsin, next to take on the Wisconsin Badgers at 7 p.m. on Wednesday.