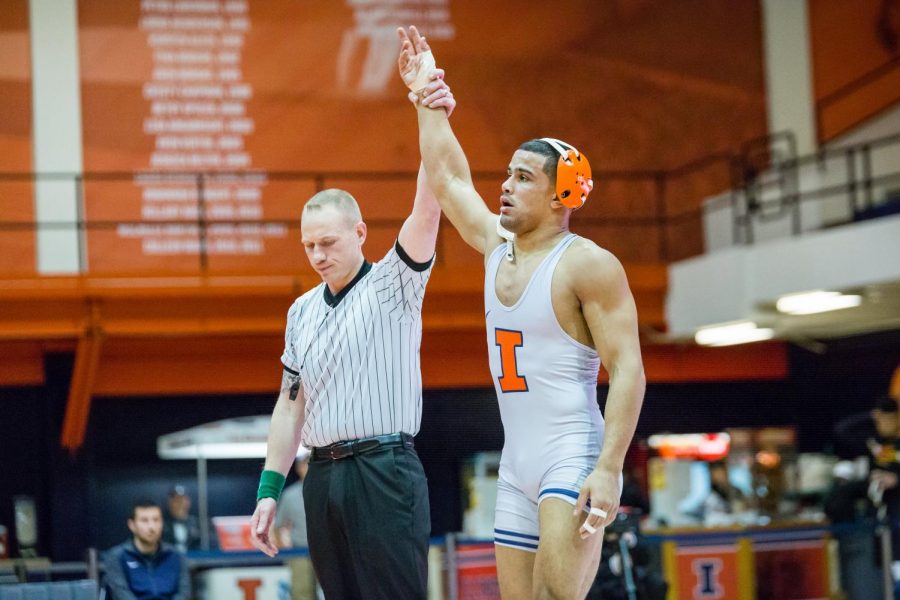 Illinois’ Emery Parker is declared the winner against Maryland’s Niko Capello in the 184 pound weight class during the meet at Huff Hall on Sunday, Jan. 28, 2018. The Illini won 25-18.

The No. 20-ranked Illinois wrestling team competed in its last two dual meets of the season this weekend when they traveled to No. 11 Northwestern on Friday and hosted No.1 Penn State on Sunday.

The Illini dropped both matchups over the weekend, losing 25-12 against Northwestern and 39-9 against Penn State.

Illinois was not at full strength over the weekend, missing action from key contributors like No. 4 Mike Carr, Dylan Duncan, Andre Lee and Joey Gunther.

The Northwestern meet started off with a win when 149-pound Christian Kanzler beat Shayne Oster in a 9-6 decision. It was the second match between the two this season, and the victory over the Wildcat made it 1-1 on the season.

The Illini would drop their next three before No. 4 Emery Parker got some more team points for the Illini. Parker tallied seven takedowns in the first two periods before clinching the win with a pin, which would tie the duel at nine.

The third and final Illini win came when Dylan Duncan scored a last-second takedown in the second tiebreaker round to get the 6-5 win.

“The biggest thing right now is fight,” said 125-pound junior Travis Piotrowski.  “A lot of wrestling is physical as much as it is mental. I think our confidence needs to be up in ourselves more. Start trusting our stuff more, trusting our shots, trusting our technique, and really just focusing on getting to it. I don’t think we saw much of that.”

The weekend’s second meet started off strong for the Illini when Piotrowski scored a takedown and then pinned his opponent, all within the first minute of action. This scored six team points for the Illini and gave them a good lead against their top-ranked opponent.

The Illini struggles started at 133 pounds, when they would go on to lose six matches in a row, increasing the Penn State lead to 28-6. The second and final Illini win of the regular season came when Parker took the mat at Huff Hall one final time.

The first period went scoreless, but Parker picked up a quick takedown after an escape to score three points. Parker finished the match with a final takedown late in the third, winning the match 7-3.

Celebrating senior night, the referee then lifted Parker’s hand for the final time at Huff Hall.

“Personally, I’m pretty good at drowning that stuff out a little bit,’’ said Parker. “But clearly afterward, you start to have some time to think and the nerves are kind of gone, then that stuff starts to set in. It’s happy and it’s sad because I put my time in here, and this was a big part of my life for a long time. Just like everything else, it’s time to move on to the next step.”

The Illini will have three weeks before they travel to Minneapolis to compete at the Big Ten Championships, and then two weeks after that to prepare for Nationals in Pittsburgh for any qualifying wrestlers.

That time will not be dedicated to learning new things, but rather maintaining skills, keeping track of weight and resting after a long dual season for the Illini.

“Most of the work is done now,” said Parker. “It’s just maintaining for the next couple of weeks. As a fifth-year senior, I’ve been here before, and I’ve experienced this postseason a few times. I think that consistency is the big thing and just keeping the good traits and the good habits in these next couple weeks.”