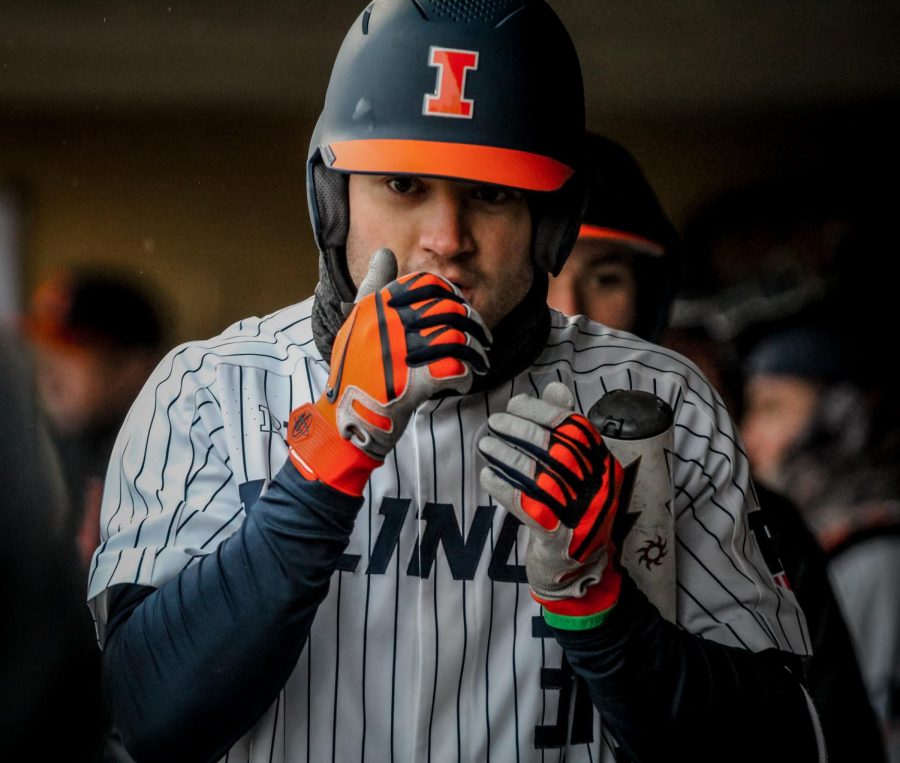 Zac Taylor walks in the dugout during the opening weekend series at Wake Forest in Winston-Salem, North Carolina, on Saturday. The Illini went on to sweep the opening series behind a strong hitting performance by Taylor.

The Illini swept their season-opening campaign in North Carolina, besting Georgetown, Wake Forest and Sacred Heart 11-3, 5-2 and 4-0, respectively. With the early season grind underway, which will see the Illini on the road for nearly the entire first month of the season, the team will have plenty of storylines to follow before its home opener on March 15.

Not everyone on the Illinois pitching staff is as experienced as senior left-handed pitcher Andy Fisher. On opening weekend, Fisher pitched 5 2/3 inning against No. 20 Wake Forest, notably striking out seven batters and throwing a no-hitter into the fifth during the Illini’s 5-2 victory over the Demon Deacons.

“I’ve been around a time or two, so I kind of know already what’s going to work, what’s not going to work,” Fisher said. “So these first few weekends for me are getting that execution and just getting the feel for exactly my release point on specific pitches, like sliders to strike people out, cutters and getting certain fastballs to certain parts of the plate.”

But relief from sophomore southpaw Josh Harris, who scooped up the win against the Hoyas and right-handed junior Ty Weber, resulted in no earned runs and just four hits between them. Harris entered the game for two-thirds of an inning, striking out one batter, while Weber stayed on the mound for 3 2/3 innings, striking out four.

Despite solid performances from Illinois’ bullpen last weekend, the versatile pitching staff also got the chance to work out some of their youngest assets.

Freshman right-handed pitcher Aidan Maldonado, a 38th-round draft pick by the Milwaukee Brewers last year, bookended the Illini’s first game against a ranked opponent this year. He threw one inning against Georgetown, striking out two batters on only eight pitches and making quick work of the 11-3 contest, 1-2-3.

For Maldonado, the transition into a Division I pitcher had been leading up to the last weekend’s season-opening series.

“The biggest thing is (speed) doesn’t matter,” Maldonado, whose fastball has been clocked in the mid-90s, said. “That was probably the biggest thing transitioning from high school. It doesn’t matter how hard you throw, it’s where you throw the ball and it’s what pitch you throw in that count. I think becoming a pitcher, not just a thrower, was a big adjustment for me.”

The Illinois pitching staff recorded only 17 hits, four earned runs and 29 total strikeouts in 27 innings this weekend. Maldonado was the only true-freshman pitcher to take the mound.

“I just thought our guys competed well,” said head coach Dan Hartleb. “They went after hitters, we got really good work out of the bullpen. I think the bullpen gave up one run all weekend, so it was a really, really good pitching performance.”

He led the Illini’s offense against Sacred Heart, Wake Forest and Georgetown, going 2-for-4, 2-for-5 and 2-for-4 on each day, respectively. Taylor registered three runs and one run at bat on the weekend and was in good company alongside junior infielder Michael Massey, who notably went 2-for-4 with one run and one RBI against Georgetown.

Freshman utility Cam McDonald also came into his own against Georgetown and Wake Forest. The Ladd, Illinois, native went 2-for-2 against the Hoyas and also notched two runs. Against Wake Forest, McDonald went 2-for-5 with one run and two RBIs.

Individually, Taylor said he’s spent more time working on his approach, managing the middle of the plate and perfecting his reaction to breaking balls —  offensive elements that paid off this weekend. But as for the Illini offense as a whole, Taylor said it only takes a couple good swings to fire up his teammates.

“Honestly, I think hitting’s contagious and I think we saw that this weekend with our whole line up,” Taylor said. “One guy starts to swing a bat, (and) we all start to get hot.”

The Illini recorded 28 hits on the weekend versus their opponents’ 17 and 20 runs to just five produced by their nonconference foes.

Although not everyone hit this weekend, Fisher said the Illini supported the work each pitcher was putting in on defense. Runners were active on bases and sought out scoring opportunities whenever they had the chance, he said.

“They showed they can score even when they’re facing a really good staff and score runs even though we’re only getting a couple hits every game,” Fisher said. “It’s encouraging to the pitching staff to see that they’re going to back you even though they’re going against someone who’s throwing really well.”

As a team, the Illini had 11 RBIs, five doubles and stole 10 bases this weekend. Although the Illini lost the offensive support of power-hitter Bren Spillane, their bats are still alive and well.

“What I liked were the competitive at-bats we had,” Hartleb said. “I didn’t see any at-bats where guys weren’t competing. At the end of the day, we didn’t have great hit production, but if you look at the number of balls we, they were hit very, very hard right at people, which just shows what can happen when you take quality swings with quality at-bats. At the end of the day, that’s all you can ask for.”

For Illinois, the game against No. 20 Wake Forest was just another day at the ballpark.

“Sometimes you have teams that don’t know if they can beat people,” Hartleb said. “They approach it to see what’s gonna happen, but our guys went into the team to beat Wake Forest. So I thought they were confident going in, executed very, very well, played with high energy and did a great job to get the victory over Wake Forest.”

Illinois’ 5-2 victory over its first-ranked opponent of the season, and fourth over a top-25 team in the last two years, is a testament to the team’s ability on both sides of the plate.

Fisher, who started the day against Wake Forest, approached the game like any other.

“Against Wake Forest, I mixed in a lot of good sliders and then just pitching fastballs to the inside part of the plate,” Fisher said. “I had pretty good execution on both those pitches, I mean that got me through the first four or five innings. Nothing special I would say, just hitting my spots and they weren’t hitting the ball most of the time.”

Fisher and the team held opponents to just 1-for-15, with runners in scoring positions during their first two games. On the field, Illinois played with zero errors compared with Wake Forest’s three.

The No. 17 Michigan, the only top-25 ranked team in the Big Ten, also secured a 3-0 start to its season this weekend.

Michigan swept its three-game series against Binghamton University out of Port St. Lucie, Florida, 10-0, 5-4, 12-2, respectively, across the weekend. Next week, the team is set to play three more games at The Citadel in Charleston, South Carolina, marking Michigan’s second nonconference road series of the season. Last weekend, The Citadel went 2-1 to begin its 2019 campaign.