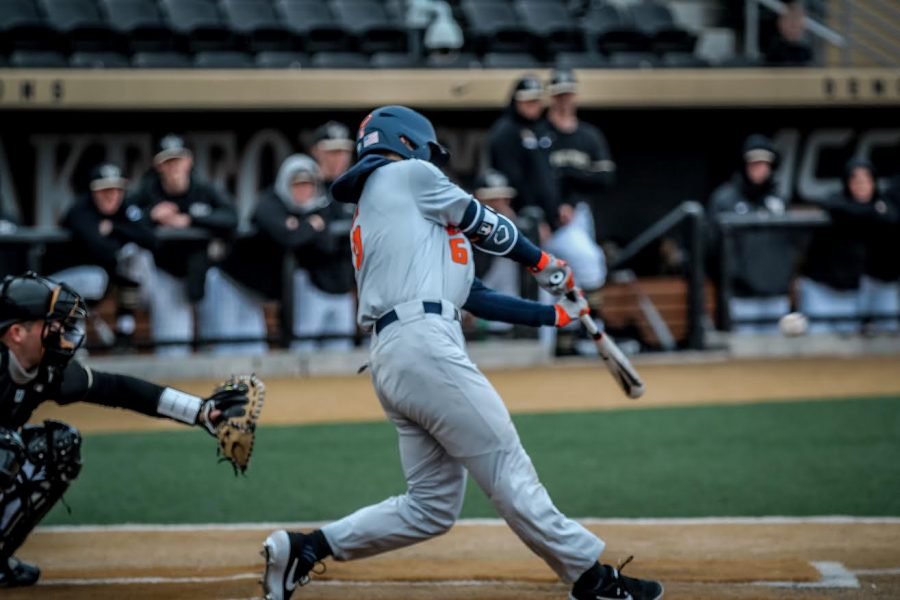 Michael Massey takes a swing against Wake Forest on Saturday. Illinois opened its season with a three-game victory in Cincinnati and hope to maintain momentum as the team takes on Florida Atlantic this weekend.

Illinois will continue its road swing in Boca Raton, Florida, for a three-game series against Florida Atlantic Friday through Sunday.

The Illini are still riding the momentum from their 3-0 season start in North Carolina last weekend; however, the Owls are coming into the weekend with identical credentials. Last week, Florida Atlantic swept Cincinnati during its three-game opening series at home, going 9-0, 8-7 (11) and 5-3 respectively.

The Owls won in two straight comeback victories against the Bearcats Saturday and Sunday, and the team will gear up again for a midweek game at Miami before hosting Illinois.

According to head coach Drew Hartleb, the Illini aren’t focusing on scouting reports or their upcoming opponents too much. Instead, the team is continuing to hone in on fundamentals this week at practice.

“Looking forward, I rarely look at what the other teams’ doing until we go head (to) the game,” Hartleb said.  “There’s a certain simple, fundamental things that I want us to be strong with each and every week.”

Hartleb said the team will be live-hitting more this week and throwing pitchers who have yet to take the mound this season. Last weekend, Illinois saw action from veteran pitchers Quinn Snarskis, Andy Fisher, Cyrillo Watson, Jimmy Burnette, Ryan Schmitt, Sean Leland, Garrett Acton and Ty Weber. However, not only did sophomore southpaw — and former Marine — Josh Harris earn his first college win on the weekend, but freshman Aidan Maldonado was the only rookie pitcher to see the mound.

The Illini’s seasoned pitching staff will rival the Owl’s starters, including senior Blake Sanderson (who started last Friday in their game against Cincinnati), junior college transfer Ryan Sandberg and junior right-hander Mike Ruff. Florida Atlantic’s pitching staff has a combined 1.86 ERA and 1.17 WHIP, according to fausports.com.

While Illinois’ starting rotation will remain the same against Florida Atlantic, the depth of the 2019 bullpen means any of the pitching staff’s 19 available arms could step in.

Only four Illini batted three or more times over three games last weekend. In order to ignite more Illinois at-bats, Hartleb and his teammates have spent more time watching game film and focusing on the mental aspects of the game.

“Hitting is such a tough and hard-earned craft and something you have to work on every week,” Hartleb said. “The pitchers going to be a little bit different, different movement, different velocity, different pitches. It’ll be working on our simple, basic fundamentals and making sure our guys are physically and mentally prepared.”