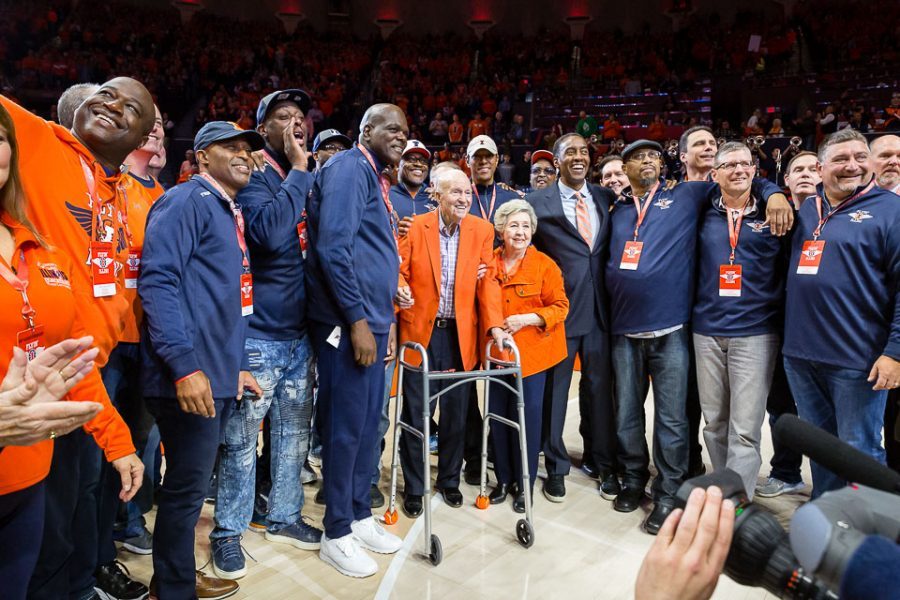 Members of the 1989 Flyin’ Illini team gather around coach Lou Henson. The team advanced to the 1989 Final Four in Seattle before losing to eventual champion Michigan.

Illinois basketball may have suffered a disappointing loss to Penn State on Saturday, but as the 1989 Final Four team was being honored, members of the Flyin’ Illini offered promising thoughts about the future under head coach Brad Underwood.

The media swarmed around many of the former Illinois standouts, who were greeted warmly by the State Farm Center 30 years after cementing their place in program history.

The prevailing sentiment throughout the Flyin’ Illini team is the current young Illini have turned a corner.

Former star small forward Kenny Battle, enveloped in cameras and recorders, shared his confident thoughts about how the Illini are on their way back to prominence.

“It’s going to happen,” Battle said. “The group of guys here now, they’re playing hard, and I love watching them. Even though the record doesn’t indicate the talent level, those guys have been in at least six or seven games they could’ve easily won with a basket here or there, a call going our way. They’ve turned it around.”

Illinois, which is 6-4 since starting the season 4-12, has put together some convincing wins over the likes of No. 9 Michigan State, No. 13 Maryland and Ohio State since mid-January.

The hot streak raised some eyebrows within the fanbase and certainly with the players who made then-named Assembly Hall a nightmarish place for opponents to play.

Nick Anderson, the 1989 team MVP who hit the shot to knock off Bob Knight’s Indiana team at the last second, said this current squad has sent a message to the Big Ten.

“It’s time to be even more hungry right now,” Anderson said. “They’ve put a lot of teams on notice that we’re not going to lay down; it’s going to be a dog fight.”

The Illini struggled with Penn State’s physicality on Saturday and didn’t shoot well down the stretch, eventually running out of time to make a comeback in front of a sold-out crowd expecting a victory.

Anderson wants the State Farm Center to induce fear in opponents. While he believes it’s getting back to that point, he also thinks there’s work to be done.

“We dictate what goes on in our house,” Anderson said. “You’re not going to come in our house and dictate anything. We’re going to set the tone from the tipoff until the buzzer goes off.”

Former forward Marcus Liberty is impressed with the current iteration of the Illini, who he said he has watched all season, even through their historically poor start.

Liberty believes Illinois has true talents in the likes of freshmen Ayo Dosunmu and Giorgi Bezhanishvili.

He’s seen each player both struggle and succeed at times this year, especially early in the season. He has also taken in their shining moments, like Dosunmu’s dagger threes against Michigan State and Bezhanishvili’s record-breaking 35-point game against Rutgers.

“(Dosunmu) figured it out,” Liberty said. “Early on, I think he had some problems trying to figure it out. But right now, I think Ayo Dosunmu is playing probably some of the best basketball of any Big Ten player right now.”

Kendall Gill, who averaged 15.4 points during the Flyin’ Illini’s memorable ‘89 campaign, said Dosunmu is someone he thinks will “play at the next level one day.”

Liberty acknowledged there are areas the Chicago native must improve in.

“(Dosunmu is) long, he’s lanky, he can get to the basket,” Liberty said. “He needs to work on his jump shot, and I can see that he has been doing it. He is what I call a gym rat; I know he stays in the gym getting busy.”

He also explained how the way the NBA scouts college talent has changed from his day.

Professional teams no longer make their decisions about players’ collegiate work or about who can contribute the most immediately when they are drafted. Many organizations face a more long-term approach to young talents, mostly in light of the explosion of players declaring for the draft after one or two years into college.

“The way it’s set up now, it’s all about potential,” Liberty said. “When I was playing, it wasn’t about that. It was like, you got to get out there and do it. But he has all the potential to be an NBA player.”

The Chicago recruiting market is perennially jam-packed, and its immense talent pool and complicated American Athletic Union and high school scene can make the city a tough place to build a pipeline in.

Gill thinks Illinois has to be able to tap into the nation’s third-biggest city, attracting its top talents downstate to wear orange and blue.

It’s a fairly common opinion to have, especially as a part of a team which managed to build its success with the in-state talents of Anderson, Liberty, Gill, Lowell Hamilton and Battle (West Aurora).

“I was at my son’s AAU practice the other day, (and) that’s all the coaches wanted to talk to me about, what the Illini where doing,” Gill said. “When you get buzz like that, that’s when you start to get interest from the top-level kids in the area.”

“It’s good for Chicago kids (who) are in high school now to see success down here in Champaign and see everybody get fired up about the team,” Gill said. “Now, it stirs up interest. Interest was stirred up when we were in high school.”

Then, there are those diamond-in-the-rough recruits who help programs punch above their weight class and compete in the Big Ten.

Bezhanishvili, the Georgian transplant, has objectively exceeded reasonable expectations as a recruit outside the top 300, averaging 12.3 points per game with a 53.3 percent shooting clip.

Through Illinois’ struggles this season, Bezhanishvili has been an unrelenting bright spot, and Liberty shares the same pleasure many fans do when they watch the kid from Rustavi, Georgia, play.

“That kid Giorgi is good, man,” Liberty said. “A lot of people are asleep on him. He is real good. I watch his footwork; he has great footwork. He scores around the basket, and he looks like he’s having fun.”

When watching Bezhanishvili play, whether it’s as he devours some pregame popcorn or high-fives dozens upon dozens of Orange Krush members before leaving the court, it’s evident he is enjoying himself.

Basketball is a game, and it’s meant to be enjoyed, regardless of where one is playing and the success one has.

“That’s the main thing when you’re playing basketball,” Liberty said. “You’ve got to have fun, man.”