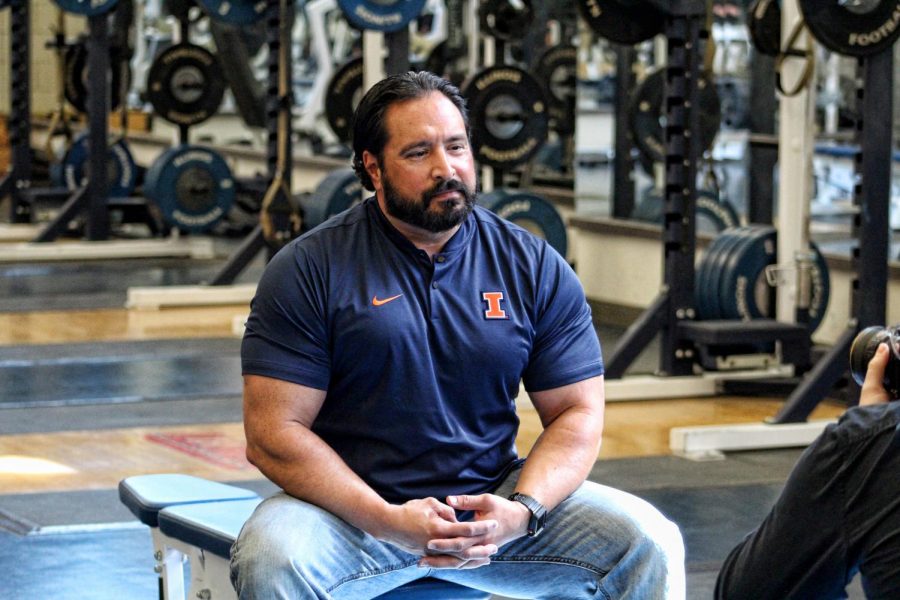 Pictured above is Lou Hernandez, the Illinois football strength and conditioning coach.

With Luke Butkus and Jon Boese off to the NFL and Thad Ward now at Temple, Smith was in need of new coaches for the offensive line and running backs, as well as a new strength and conditioning coach.

When addressing the new hires, the first name that left Smith’s mouth was McClain’s.

Because McClain served as an offensive analyst in 2018, one of the key reasons for his hire, according to Smith, was his familiarity with Illinois offensive coordinator Rod Smith, as the duo worked together previously at both Michigan and West Virginia.

One of the critical goals of the offseason from Lovie was to make sure Rod was the leader of the offensive coaching search to build a staff with the best possible fit both toward the system and from a chemistry standpoint.

“Lovie told me, ‘You spearhead it; you gotta get guys that fit your philosophy,’” Rod said. “I had calls from people that I knew, people that I don’t know, tons of calls. And as I talked to people, the one thing I kept coming back to was my familiarity with Bob. I think he is top notch, I think he’s tremendous. He’s a great teacher.”

Last season, the Illini line paved the way for Reggie Corbin to run for 1,085 yards and nine touchdowns.

With most of the group outside of Nick Allegretti returning and Alabama transfer Richie Petitbon incoming, McClain feels fortunate for the group he’s inherited.

When it comes to his plan for the 2019 group, McClain acknowledged the sheer physicality of the position means he is going to have to push his players, but he will only do so with the intention of helping them improve.

In terms of his familiarity with Rod, McClain is looking forward to the experience because of Rod’s willingness to take strategic advice from other coaches. However, McClain knows not to overstep his boundary even though he and Rod are close personally.

“Rod don’t have an ego. Rod’s all about what’s best and getting better,” McClain said. “He wants to hear from everybody. In the end, I know I respect the fact if says no, he says no. It’s time to move on.”

The other coach Rod was heavily involved in hiring was Bellamy. After earning first-team All-Big Ten honors as an Illini in 1989, Bellamy comes to the program after serving as the wide receiver coach at Toledo, Ohio, the past two seasons.

Smith detailed the story of Bellamy’s interview, which won over his approval. Though there was severe weather which caused Bellamy’s flight to be canceled, the former Illini receiver decided to drive to make the meeting, which Smith said showed him Bellamy’s dedication to the program.

Bellamy made it clear he sees Illinois on the cusp of something special and feels he’ll be able to recruit young men who will want to be a part of that.

“I’ve seen this place when it was successful, and we’re that close,” Bellamy said. “In recruiting, when you see the facility going up right now, it’s gon’ be easy to tell the kids this is the place to go. You add the education along with the facilities (and) it’s top notch.”

Bellamy previously served as the receivers’ coach at Illinois from 2012 to 2015 and said both he and his family knew a return was destined to happen one day.

Lovie expressed similar compliments as Rod toward Bellamy, citing his experience in-state and passion for Illinois as key assets.

“As a recruiter, then you know the University the way he does. (I’m) just really excited about Mike coming back home,” Smith said.

For Lou Hernandez, his relationship with Illinois and the Champaign-Urbana community runs deep.

Serving as the strength and conditioning coach from 2005 to 2011, Hernandez built a life in Champaign he was eager to return to after seven seasons at North Carolina.

“I feel like I’ve had an opportunity to build a room here, so there’s still kind of a piece of what my philosophy has been here, so that’s No. 1,” Hernandez said. “No. 2, from a personal standpoint, I got my wife to marry me here, and my two little girls were born here. I’ve always just had a great connection with this place; it meant so much when I was here, and it was primarily because of the people and the community.”

With Mack Brown taking over as the head coach in Chapel Hill, North Carolina, Hernandez became available just as Boese exited the program to join the Cincinnati Bengals.

Once the positions needed to be filled, Lovie said he kept hearing Hernandez’s name as a recommendation, and after evaluating him as a candidate, he made the hire many had been hoping for.

“Your strength and conditioning coordinator spends as much time with the team as anyone,” Lovie said. “Lou has a history, and once the position became open, if I (could) only tell you how many people reached out to me that love the University of Illinois that wanted to see him back, you take that into consideration.”

As college football changes stylistically, with more quick passing and read-option concepts, the way a team conditions itself in the offseason has evolved since Hernandez was last in charge in Champaign.

Though he may need to adjust to the new technology and techniques now available in 2019, Hernandez has a set of principles he has always stuck to, which will be used to get the team into shape.

“What we’re gonna do is, I’ve talked to coach, (and) I’m gonna be an extension of what he is expecting,” Hernandez said. “I’m not necessarily concerned with what they lift, how they lift and how they run. It’s how they approach those things. It’s their expectations, it’s their work ethic and it’s their accountability. Those are the things that I’m gonna work on first, and all the rest of it from there will eventually start to come.”

The trio joins Keynodo Hudson and Miles Smith as new hires to a staff which has suffered through the attrition that is the college football coaching carousel. When speaking to each new member, the mentality is clear; they feel the program is ready to take off.