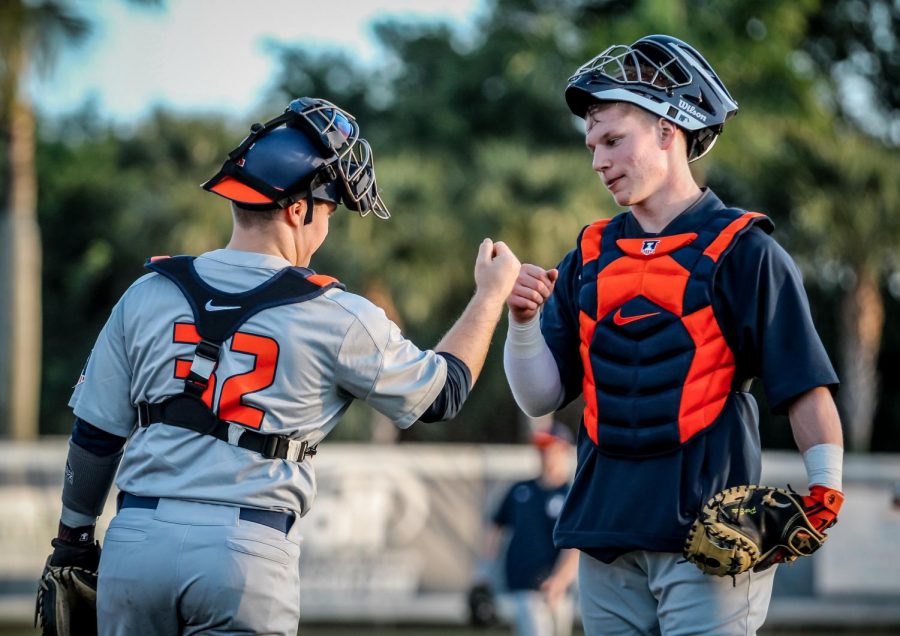 David Craan and teammates celebrate a victory against Florida Atlantic over the weekend. The Illini took all three games of the series for a 6-0 start to the season.

Illinois opened its second road series of the season with a 7-6 win over Florida Atlantic University thanks to Korte’s dominant performance at the plate.

During Friday’s game in Boca Raton, Florida, Korte hit two impact home runs, including a game-tying three-run bomb in the ninth. Korte evened the playing field 6-6 before senior outfielder Zac Taylor scored on a bases-loaded walk, lifting the Illini to their fourth straight victory of the spring and their first 4-0 start since 2015.

Korte, a Florida native, led the Illini’s offense with two home runs and five RBIs after going 2-for-4 on the day. According to Illinois Athletics and Korte, his two-homer game marks the first of his baseball career.

Senior outfielder Jack Yalowitz and freshman infielder Cam McDonald also helped lift the Illini past the Owls, going 3-for-4 with one RBI and 1-for-4 with two runs.

Right-handed pitcher Caleb Larson scooped up the win for Illinois and marked the first time a true freshman has done so this season. The Wheaton, Illinois, native pitched for one inning, allowing just one hit. Junior righty Garrett Acton clinched the save for Illinois — his second this season — in a 1-2-3 ninth inning.

On Saturday, the Illini continued their flawless record and moved to 5-0 on the season after trumping the Owls again 5-3.

Illinois allowed Florida Atlantic to score first in the second inning off a home run by Andru Summerall to right field. But the Illini answered with two runs of their own in the third inning. Freshman infielder Kellen Sarver hit a single to right-center, sending senior utility Michael Michalak in to score. Then, junior DH Michael Massey knocked a single into right field, moving freshman infielder Branden Comia to second base and then to third on the throw, allowing Sarver to score.

Illinois tacked on three more runs in the sixth and seventh innings. In the sixth, a Yalowitz single to left-center propelled Taylor to second and Massey in to score, and then Korte hit a sacrifice fly to center field, ushering Taylor in to score.

Although the Illini held onto the lead for the majority of the outing, the Owls’ bats began to heat back up in the seventh. Florida Atlantic’s Eric Rivera reached on an Illinois throwing error to third — the Illini’s only miscue of the game — allowing B.J. Murray to score.

And while Illinois’ bats were silenced in the eighth, Florida Atlantic’s Francisco Urbaez batted a single to the left side, sending Pedro Pages in for the Owls’ third and final run of the game.

Collectively, Illinois had a .986 on-base plus slugging percentage compared to Florida Atlantic’s .489 during Saturday’s game. The Illini also produced 13 hits to the Owls’ six.

Senior left-handed pitcher Andy Fisher started on the mound for Illinois, throwing for six innings and allowing just one earned run and two hits with nine K’s for the win. Junior righty Ty Weber relieved Fisher in the seventh and only threw for that inning, producing one strikeout and allowing one earned run. Right-handed senior Quinten Sefcik pitched the next frame, allowing three Owl hits and one earned run in his first appearance on the mound this season.

Junior right-hander Garrett Acton closed the show for Illinois in the final inning and got the team’s save. He allowed just one hit between the four batters he faced.

After clinching the series Saturday, the Illini extended their winning-streak to 6-0 after sweeping the Owls in a nail-biting 10-11 contest, spanning 10 innings, Sunday afternoon.

Taylor led the Illini offense with three runs after going 3-for-6 on the day, while Sarver trailed him with two runs and two RBIs, going 3-for-5.

Freshman right-handed pitcher Aidan Maldonado stepped in for Burnette, throwing for the next 2 1/3 innings and allowing just one earned run and three hits.

Sophomore lefty Josh Harris came in for one-third of an inning, facing one batter while recording one K. Junior right-hander Ryan Schmitt relived Harris for one and one-third innings and allowed just two hits.