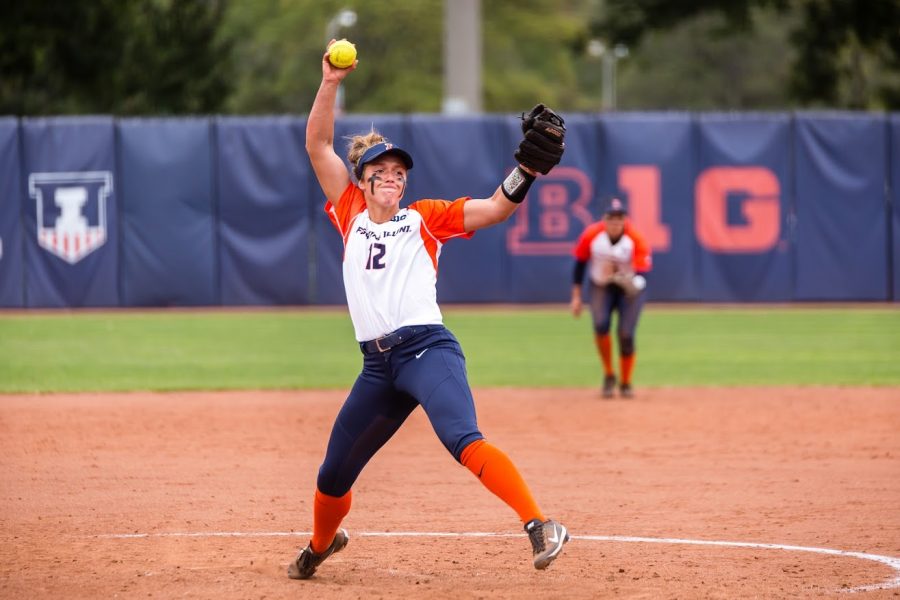 Illinois pitcher Taylor Edwards (12) delivers the pitch during the game against the University of Wisconsin-Parkside at Eichelberger Field on Sept. 29. The Illini won 8-0.

Illinois softball dealt with its fair share of trials and tribulations this weekend as inclement weather led to the cancellation of its tournament-opening game against Hofstra on Friday. Following the canceled matchup, Stephen F. Austin brought Illinois’ six-game win streak to an end Saturday evening.

However, despite Mother Nature’s interference and an unsuccessful Saturday performance, the No. 25 Illini did leave Mobile, Alabama, and the Mardi Gras Invitational with a tournament record of 3-1 and an overall record of 10-3.

While rain led to the cancellation of Friday afternoon’s matchups, Illinois went up to the plate against host South Alabama after an hour and a half delay that night. A dense gray fog surrounded the field for most of the game, creating another obstacle for both teams to try and overcome.

“Our team handles rain delays, first of all, super, super well,” Sherlund said. “We had a bunch of weather mishaps and stuff last year; it’s always a fun excuse to just goof around.”

A lead-off walk and steal from Sherlund put the Illini veteran in scoring position in the top of the first. Sophomore catcher Bella Loya would then bring her home with an RBI single to give Illinois a 1-0 lead. Sherlund’s run would remain unanswered until the second frame, when South Alabama tied the game 1-1.

Freshman pitcher Sydney Sickels’ performance on the mound would limit the Jaguars to only two runs. Sickels’ fifth win of the season included three straight strikeouts in the third and a three-up, three-down inning in the fourth, even in the low-visibility conditions.

“At first it was a little different,” Sickels said. “I’ve never played in weather like that, but you just kind of forget about it, focus on the game, and it just kind of went out of my mind.”

At the plate, Illinois resident slugger Loya would pick up two runs on four hits and four RBIs, also having Illinois’ lone homer of the game. As a team, the Illini totaled 11 runs on 10 hits, with six Illini earning an RBI Friday night.

Saturday morning, conditions were much improved at Jaguar Field when Illinois played Nicholls State. Once again, Sherlund was the first Illini at-bat and set the pace by knocking one deep for a lead-off home run. Sherlund’s classmate, third baseman Annie Fleming, followed her lead to take a round-tripper and gave Illinois a 2-0 lead in the first. Fleming would then be one of three Illini to hit a dinger in the second, an inning that extended the Illini’s lead to 8-1.

In the circle, senior pitcher Emily Oestreich started things off for Illinois, but was relieved by junior Akilah Mouzon, who earned her first win of the season. Senior Taylor Edwards would close out the game with a three-up, three-down inning.

Saturday evening, Sickels returned to the mound, giving up six earned runs in 3.2 innings against Stephen F. Austin. Once again, Mouzon entered the game as a relief pitcher, allowing only one earned run. But the Illini only answered two of the Lady Jacks’ eight runs, taking their only loss this weekend.

“We have to find ways to win even when we’re not at our absolute best. I think we learned a lot about ourselves from that game, and I think it’s important for us,” Fleming said. “It kind of gives us that hunger back.”

Closing out the weekend, Illinois and Nicholls State met once more on the softball diamond. Once again, Sherlund was the first Illini to round home plate after being sent in by redshirt senior left fielder Carly Thomas on an RBI single. Loya would also go on a round trip after her eighth homer of the season and third of the tournament.

By the top of the sixth, Illinois had extended its lead to 4-0, but Nicholls State closed in to make the score 4-3 going into the seventh.

An RBI hit in the seventh frame by senior Veronica Ruelius gave Illinois some more insurance, and the team closed out the tournament with a 5-3 win over Nicholls State.

Next up, the ranked Illini will stay on the road and head to Tulsa, Oklahoma, for the OSU-Tulsa Invitational on Friday.