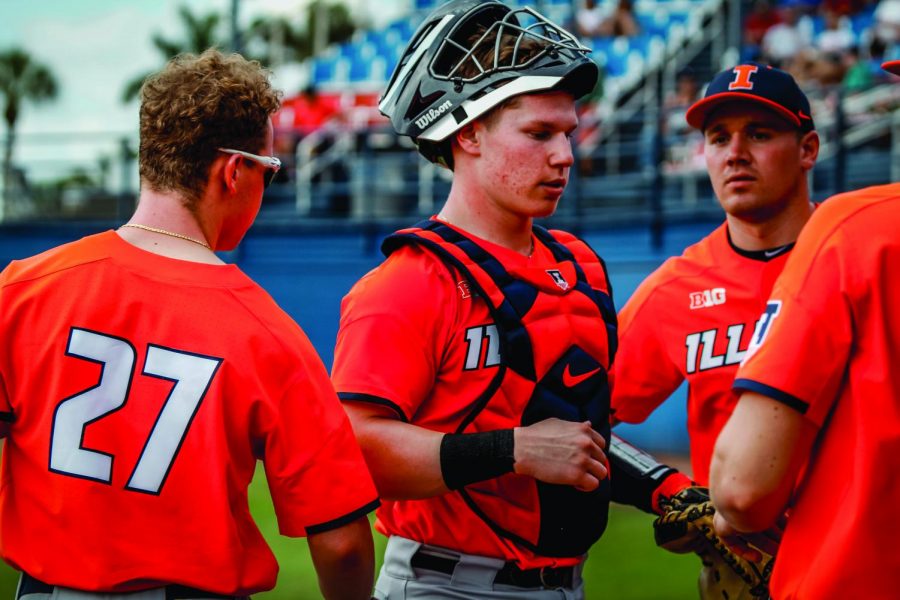 Freshman catcher Jacob Campbell walks back to the dugout during the Illini’s tournament in Boca Raton, Florida. Campbell decided to attend the University despite being drafted by the Chicago Cubs in the 2018 MLB Draft.

Not everyone who plays baseball at the Division I level gets a shot in the big leagues, and even fewer get the call to play pro ball fresh out of high school.

But Illinois freshmen Aidan Maldonado and Jacob Campbell both had that chance during last year’s MLB Draft when the Milwaukee Brewers and Chicago Cubs plucked the duo during the 38th and 36th rounds, respectively. However, both passed on the opportunity and decided to pursue a collegiate career at Illinois, something right-handed pitcher Maldonado said he questioned at first.

“I don’t think that a lot now, but I definitely questioned it in the beginning,” Maldonado said. “There’s a lot of things that college provides that you wouldn’t be able to experience in a minor league system or rookie ball. It’s allowed me to work on the small things and not worry about your career, I’m just trying to be able to develop.”

Maldonado was one of the 304 players called up from a high school program and one of the 502 right-handed pitchers selected during the 2018 MLB Draft — a number accounting for nearly 41 percent of prospects chosen.

But while Maldonado’s position is almost always in high demand by major league teams, he said he would rather work with the Illinois pitching staff to develop his presence on the mound rather than be thrown into a minor league system straight away.

“The coaching staff’s amazing here,” Maldonado said. “(Pitching coach Drew Dickinson is ) my guy. He’s literally like my best friend. You couldn’t ask for better coaches in the country. The decision was made based on the coaching staff and knowing that I’d be able to develop more, and in the grand scheme of things, probably benefit my baseball career as a whole.”

Campbell, who was drafted by the Cubs as a catcher, said he pulled away from the draft and toward Illinois for similar reasons.

“We’ve got a great coaching staff here, and I wouldn’t want to miss out on an opportunity to come here and play with a great program against great competition and just get better,” Campbell said.

Catchers were the fourth-most drafted position in 2018 with 115 taken but only accounted for about 10 percent of the entire draft. For Campbell, who was ranked as the No. 2 recruit in Wisconsin and the No. 8-ranked catcher in the nation by Prep Baseball Report, coming into college after gaining attention in the draft hasn’t affected the way he approaches the game.

“It’s just the same mentality every day,” Campbell said. “Just to get better in practice and as long as we’re getting W’s at the end of the day, that’s all that matters.”

Since the two out-of-state recruits’ first chance to be drafted has come and gone, they are focusing on their next three to four years at Illinois and learning as much as they can from older players on the team.

Maldonado, who was the No. 2-ranked recruit in Minnesota, the No. 97-ranked right-handed pitcher in the nation per Prep Baseball Report and Illinois’ highest-ranked recruit, is learning to adjust to an entire new type of pitching at the college level.

“The transition to college baseball was a lot different than what I thought it was going to be, quite honestly,” Maldonado said. “The game is such a mental game, and I definitely never fully understood that until I got to here. The biggest thing is (speed) doesn’t matter. That was probably the biggest thing transitioning from high school to college, from ‘what’s your read’ to knowing it doesn’t matter how hard you throw. It’s where you throw the ball and what pitch you throw in your count. So, I think sort of becoming a pitcher instead of a thrower was another adjustment for me.”

Although playing for a college team has given both freshmen new opportunities on the field, being able to pursue a degree from Illinois is something Maldonado said he probably wouldn’t have been able to do while in the minor league system.

“My mom and dad are really big on education, so going to college was important,” Maldonado said. “One of the biggest things not going to school doesn’t provide you with is the degree at the end, and I think that takes you farther than anything. Two percent of any baseball player makes it to the MLB, so if it doesn’t work out in the end (a degree) is huge, so that’s really the mindset there.”