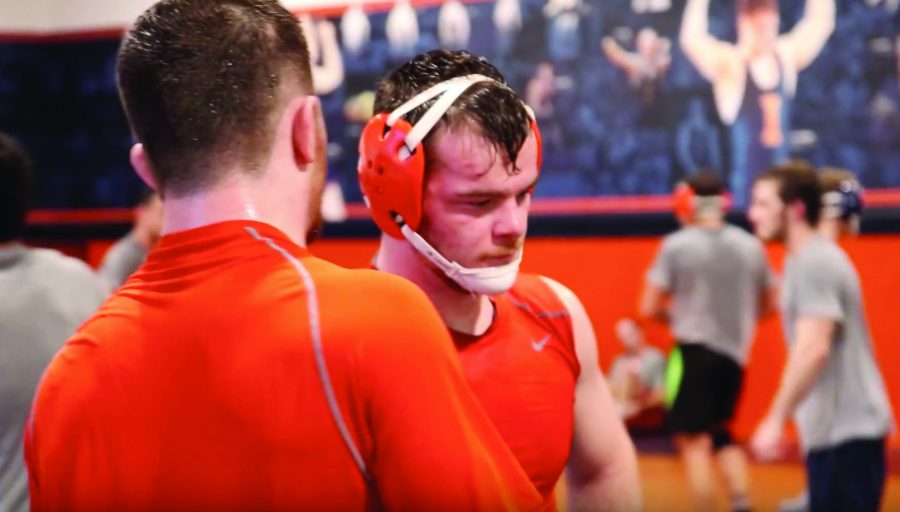 The Braunagel twins talk during a break in practice at the Wrestling practice space at Huff Hall. The two brothers decided to attend the University after each having a successful high school campaign.

For the Braunagel twins, freshmen Danny and Zac, wrestling is the one true thing they’ve shared throughout their lives.

The twins started wrestling at 5 years old as a way to keep in shape for their other athletic interests: baseball and football. In those early years, they weren’t as serious, but after success in middle school and high school, their attitudes started to change.

In the eighth grade, Danny made the state finals but lost to his current Illini teammate, We Rachal.

“After I lost that match, I was devastated,” Danny said. “But once I started looking back at the brighter side of things, I realized by how upset I got, that I really cared and I really loved what I was doing. I was really passionate about it and that is when I started realizing that wrestling is what I wanted to do.”

After that match, Danny became solely focused on wrestling. However, Zac still played football until his sophomore season of high school. That year, he got recognition by getting invited to a wrestling camp. After that, he decided to focus only on wrestling that summer alongside his brother, and his skills greatly increased.

In the last two years of their high school careers, the twins became two of the best wrestlers in the state. The two each put together junior and senior seasons  which culminated with two state championships each.

Given they’re almost the same weight, Danny and Zac also wrestled each other all the time.

But sometimes, their competitive edge got the best of them. The brothers got kicked out of practice almost once a week in their senior year for fighting.

“It even goes as far as when we’re on the couch watching TV,” Danny said. “We see the other one put his headphones on and get his sweats on to go get a run in. We’re like, ‘Now I got to go. I can’t let him outwork me.’”

As their senior season ended, they had to decide where they would continue their college careers. When they heard assistant coach Mike Poeta joined the coaching staff last season, the twins took notice of Illinois. After consideration, they realized they wanted to wrestle in their home state.

But, the admiration was not one-sided.

Now, the duo seems to fit right in at the University. Danny likes the home state aspect Illinois offers, especially since only two people on the team aren’t from Illinois, so the twins have wrestled with or against most of their teammates in the past.

Zac likes how close the team is, especially the freshman class.

“There are 10 of us freshmen, and we see each other almost every day,” Zac said. “It’s really like a family. When one of them makes a friend, we all make a friend. We’re really close with the soccer team and the gymnasts. My favorite part of it is probably the family aspect of that.”

The brothers have learned a lot about the sport at the collegiate level in their short time at Illinois. They’ve benefited from wrestling against Illini stars like Mike Carr, Emery Parker and Andre Lee, who have taught them better techniques.

“I’ve wrestled a lot with Mike Carr,” Danny said. “In high school, I thought I was working hard, then I got here and saw the way he was working. I realized that I was not putting in enough work to be where I want to be. Just seeing him and how hard he is working just motivated me and pushed me.”

The twins have already had success in their college careers as redshirts, placing in tournaments while competing unattached. In the next three years, though, their goals are not just to win individual championships but also to win a team title for the Illini.

“(Danny and Zac) are gonna be really good leaders,” Heffernan said. “They live the lifestyle, and they’re really good students. They want to be great individually, and they want to be on a great team. That’s going to make a big difference team-wise.”