Team in need of new energy 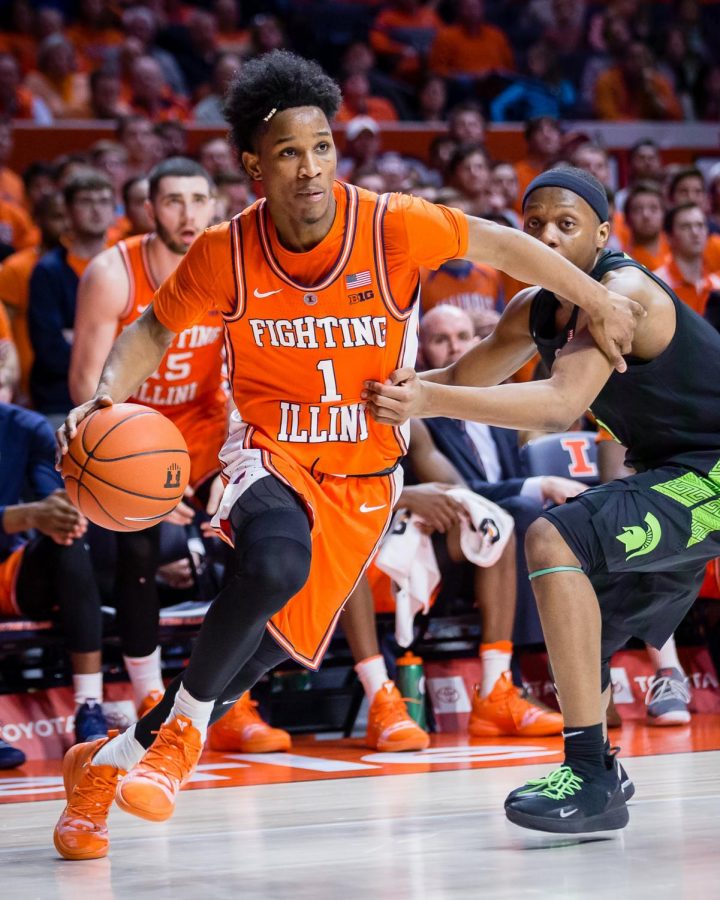 Illinois guard Trent Frazier drives to the basket during the game against Michigan State at the State Farm Center on Feb. 5. The Illini won 79-74.

Illinois has dealt with its fair share of close, tough losses this season.

While the team is on its way to miss the NCAA Tournament for the sixth straight season, unless it wins the Big Ten Tournament, the young team has shown recent signs of promise after starting the year 4-12.

Despite a four-game stretch of wins ending with losses to Wisconsin and Penn State, the team isn’t happy with where it’s at.

Senior guard Aaron Jordan didn’t shy away from expressing his displeasure with the team’s recent results.

“A lot of things to be disappointed about, to be honest,” Jordan said. “But that’s just tough love. That’s how you look at yourselves, (and)  look at the team. You basically say, ‘Hey, fortunately we have another chance to go out there and prove ourselves.’”

A seven-point loss to last-place Penn State at the State Farm Center on Saturday was the latest shortcoming for Illinois.

Head coach Brad Underwood said his team doesn’t have much room to make mistakes and will most likely lose if it doesn’t match the energy level of opponents.

“We’re a team that has to play extremely hard; we don’t have a tremendously high margin of error,” Underwood said. “When we get outplayed in the effort category, that’s something we’ve got to correct. That was the case Saturday (against Penn State).”

It wasn’t an x’s and o’s matter in that loss, Frazier said. Rather, it came down to Illinois failing to play with the same energy  which led to the team’s recent success.

“We throw that (Penn State film) away,” Frazier said. “The way we’ve been playing, I didn’t think we played that way. We’re moving forward, trying to get back on our run right now.”

Illinois has weathered an assortment of close losses already this season, and Frazier said the team’s recent outcome is no different.

“Falling short in those games, those are tough ones to lose,” Frazier said. “When we play (with) our best effort, we give it all. Losing those close ones, I think, kind of sucks a little energy out of us. But we can’t let that happen. We have to get back to it.”

Underwood openly lamented his team’s performance against Penn State, a program the Illini have now lost five straight games to.

“It was a tough weekend; we got outplayed,” Underwood said. “Penn State was the aggressor. They played harder than we did. It was a game they definitely deserved to win.”

The coach rattled off several things his team has gotten away from. Namely, Underwood cited effort for Saturday’s defeat, but there were also technical reasons.

For one, he wants freshman forward Giorgi Bezhanishvili to get more feeds, especially in the paint where he has regularly found success

Against Penn State, Bezhanishvili got a lot of early looks inside, but Underwood said Illinois got away from it as the game went on and hurt its chances to win and offensive productivity.

“We forget about him sometimes,” Underwood said. “We’ve got to continue to put him in different spots.”

Bezhanishvili has by far the best shooting clip of any Illini, boasting a 53.3 percent rate.  The next closest — besides infrequently used freshman Samba Kane, who has made 13 of 20 field goals — is junior guard Andres Feliz’s 46.2 percent mark.

“The one thing that we’re trying to continue to do is get the ball to Giorgi (and) understand that he’s a pretty viable option,” Underwood said. “I thought we got good looks; I’m not arguing the looks. I can’t control whether they go in or not, but I liked our looks.”

Energy as an X-factor

Frazier said he perceived a recent lack of energy from his team in practice while speaking with the media after practice on Tuesday.

It’s a lot of why Illinois’ form has faltered since its win at Ohio State on Valentine’s Day.

“We haven’t had a lot of energy at practice lately,” Frazier said. “That’s one of the big reasons (for the losses). We need to get that back. When we won four in a row, everybody came to practice everyday ready to go. Everyone had a lot of team energy, and we were getting after it. That’s our main focus right now.”

Evidently, it’s something that’s up for debate.

Jordan said he hasn’t seen a lack of energy and thought practice on Tuesday was a positive one.

“More like a lack of execution,” Jordan said. “Even just today, our guys really got after each other, which is a good thing.”

Underwood said Frazier might be able to perceive energy levels better than he can but he noted he was happy with the way the team has practiced since the Penn State loss.

“I thought our second team (Tuesday) was unbelievable,” Underwood said. “They just kicked the dog out of the first team, it wasn’t even funny. I love seeing that; that’s a huge sign of growth.”

Despite disagreements, the team nevertheless reached a consensus on energy: Bezhanishvili is the emotional and energetic focal point of this group.

The young forward is expressive on the court and in regular interactions, frequently cracking wide smiles, playing to the crowd at the State Farm Center or getting upset with his own plays or calls by officials.

Underwood has a high-level of trust for the relatively inexperienced Georgian. He doesn’t hesitate to show excitement about Bezhanishvili’s future while also emphasizing his importance to the current team dynamic.

“Giorgi’s established the fact that he’s a kid that brings it every day. His emotion is very much in play with all of our guys,” Underwood said. “He gets us going. He’s a talker. He’s a great communicator. All those things are really, really positive. “

Frazier agreed and, for his part, said he believes he also needs to bring more energy to his teammates.

It’s part of what has helped the young Illini find success at various times this year, Frazier said, and it can lead to more if the team can tap into the right streams of it once again.

“It starts with Giorgi,” Frazier said. “Assistant coach Ron ‘Chin’ Coleman tells me a lot, it starts with me, too. I think the thing is me just being more vocal, talking early getting guys going. Just talking, bringing a lot of energy from the jump. That’s when we play at our best, when everyone is playing for each other and playing hard. We bring a lot of energy.”