Illini continue to climb in ranks 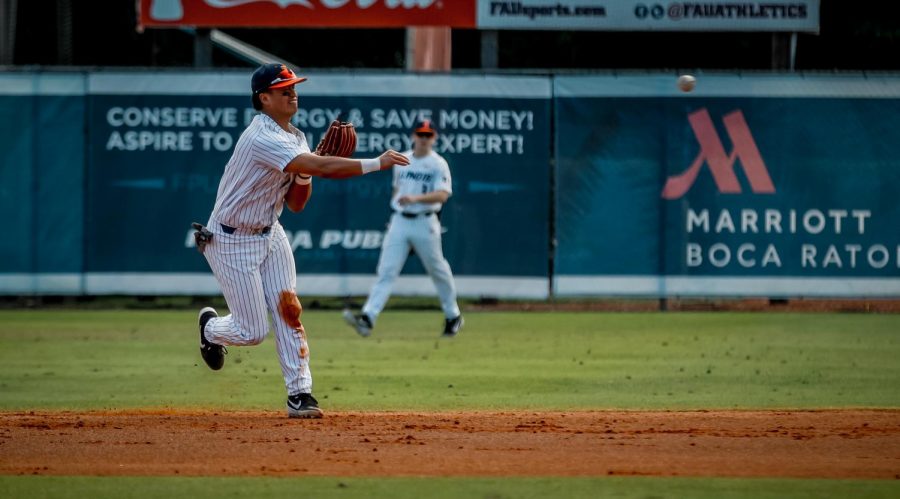 Illinois freshman infielder Branden Comia throws a ground ball during the Illini’s series at Florida Atlantic University last weekend. Comia has been one of the strongest first-year players for the Illini this season.

The No. 25 Illini are wrapping up their third road series of the spring season on Monday in a quest to not only hang on to their top-25 standing but also improve upon their 7-1 start to the year.

Illinois in the Big Ten

As of Sunday, No. 17 Michigan was the only Big Ten team hanging onto a perfect record. The Wolverines were one of three Big Ten teams, including the No. 25-ranked Illini, to enter the weekend after a 6-0 start.

Illinois and Michigan might be the only currently ranked contenders in the Big Ten, but Penn State hopped on its third road series with a spotless record as well. However, on Friday, the Nittany Lions were blanked by the Duke Blue Devils, 14-0, in a combined no-hitter. But on Saturday, Penn State won 8-7.

Michigan has won seven-straight games, including its series opener Friday against California State University Northridge, which Michigan won by a single run, 2-1. Two of Michigan’s four games were postponed this weekend due to inclement weather.

Illinois is currently ranked second among Big Ten teams, although conference play doesn’t begin until March 29, when Illinois tees off at Iowa. The Illini are behind the Wolverines (7-0), who are first in the conference, and they just jumped ahead of the now-No. 3 Nittany Lions (7-1).

Freshman utility player Cam McDonald is one of the many freshmen making an impact for the Illini.

During his first year with Illinois, McDonald has been a notable offensive force. As of Saturday, McDonald was hitting .300 with six runs across 30 at-bats. He also has eight RBIs on the season so far, four of which were knocked in during Illinois’ win over Florida Atlantic on Feb. 24.

In addition to McDonald, freshman infielder Branden Comia is maintaining a .294 batting average after 34 plate appearances as of Saturday. Comia’s also registered three runs — which he scored during Illinois’ victory over Wake Forest –  and three RBIs during the spring season. In the field, Comia has only recorded one error, posting a .968 fielding percentage.

McDonald and Comia have the fifth- and sixth-highest batting averages out of the Illini, respectively.

Illinois is hitting a collective .281 compared to its opponents’ .238 cumulative batting average. The Illini are also narrowly edging opponents’ slugging percentages, by .037 in fact, with .374 compared with .337 from their foes.

But while Illinois’ broad hitting percentages look nearly identical to the non-conference teams’ they’ve faced so far this spring, there are a few numbers that set them apart.

The Illini are generously out-hitting opponents: 78 hits to 65 collectively. And Illinois has out-gained total bases compared to its rivals, with 104 to 95.

Overall, Illinois is outmaneuvering its competition on-base as well.

The Illini have stolen 17 total bases out of 21 attempts so far this spring, compared to just four from the five teams they’ve faced as of Saturday. So, Illinois isn’t just good at getting on base. It is also good when it comes to doing whatever it takes to get home.

At the plate, however, senior outfielder Zac Taylor is at the helm of Illinois’ offense with a .371 batting average under 35 at-bats. He leads the team with 13 hits, nine runs, two doubles, two home runs and six RBIs. Taylor is also efficient when it comes to getting on base.

In fact, as of Saturday, his on-base percentage was sitting at a .441 among batters with more than 12 at-bats.