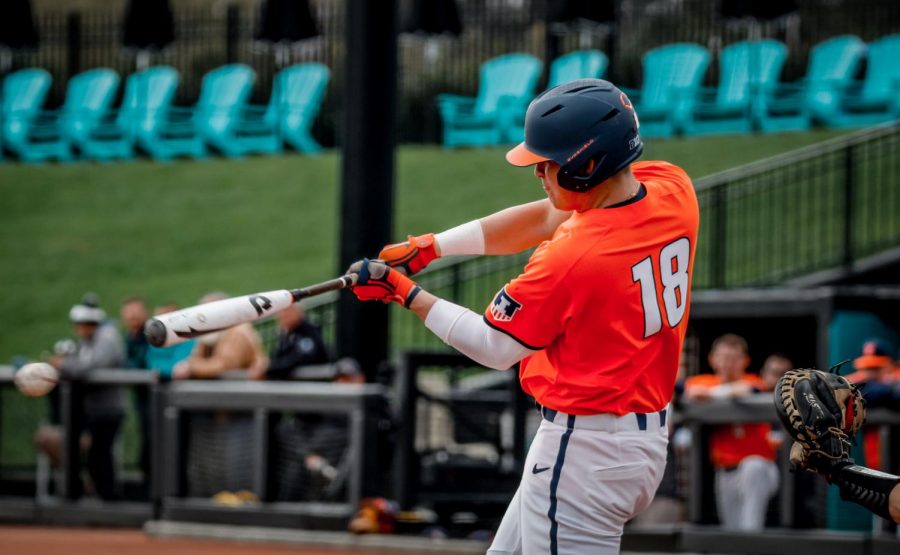 Kellen Sarver swings at a baseball in Illinois’ baseball’s tournament in Conway, SC over the weekend.

The Illinois baseball team not only suffered its first loss of the season but ended its third road series on a two-game losing streak.

Going into the weekend Illinois was sitting at No. 25 among NCAA teams; on Friday, the Illini fell to the No. 20 Coastal Carolina Chanticleers 11-3 in their first ranked-vs-ranked contest since 2015.

The loss dirtied Illinois’ 6-0 record going into the weekend and set the tone for a challenging, multi-team series in Conway, S.C.

Although the Illini went into their games with the will to win, they couldn’t get the job done for a slew of different reasons, according to head coach Dan Hartleb.

“I think we were clear minded (going into the weekend),” Hartleb said. “We didn’t pitch well the first night and didn’t learn from that first evening … We have to learn from our mistakes and use them to get better.”

Senior left-handed pitcher Andy Fisher started on the mound for Illinois and consequently recorded his first loss of the spring. Fisher threw for four and one-third of an innings, allowing six hits, five earned runs and striking out just three batters.

Junior righty Ryan Schmitt was the first to relieve Fisher, but only faced four batters, walking two. Next up was left-handed freshman Nathan Lavender, who only threw for two-thirds of an innings but allowed two hits and four earned runs across only six batters. Senior right-handed pitcher Tyler Engel came into the game after Lavender and held down the mound for the next one and one-third inning, allowing just one hit.

Freshman right-hander Caleb Larson closed out the game for the Illini, throwing for a single inning and letting one hit and one earned run past his defense.

On the day, Coastal Carolina had its lead-off batter reach and score in four of the first five innings and scored 10 of their runs during the first six frames.

According to Hartleb, the pitching was off this weekend. While a few Illini had solid starts on the mound, the bullpen and other starting members of the pitching staff faltered, he said.

On offense, no Illini got more than a single hit, however senior outfielder Zac Taylor led the team with two runs and went 1-for-4. DH Michael Massey scored Illinois’ only other run of the game and went 1-for-3.

Illinois had a much different fate on Saturday against Northeastern (5-5), when the Illini toppled the Paws 5-4.

Illinois hit the ground running after scoring two runs in the third inning. The Illini held onto the lead through the fifth when they produced two more runs; however, during the seventh inning the Paws scored three runs and tacked on one more in the eight, tying the contest 4-4. But Illinois answered back during the final period with a single run scored off a throwing error.

Junior righty Ty Weber threw for the first six and two-thirds innings, allowing four of the Paws’ six total hits and three of their four runs, one being earned. Right-handed senior Sean Leland helped silence Northeastern’s bats for a single inning, allowing just one hit and one earned run and struck out one batter. Sophomore southpaw Josh Harris relieved Leland and faced just one batter, who he walked.

Junior right-hander Garrett Acton bookended Illinois’ only victory of the weekend and scooped up the win after throwing one and one-third inning. He struck out two batters and allowed just one hit.

Illinois earned their second loss of the spring to Connecticut Sunday in a 4-7 battle. The Illini led 2-0 and 3-1, but ultimately fell to the Huskies after they scored four runs in the seventh inning.

Although junior righty Cyrillo Watson had a solid start on the mound, allowing six of the Huskies eight hits and three earned runs while striking out two across six and one-third innings, the bullpen couldn’t hang on. Leland, Harris and freshman right-hander Aidan Maldonado threw for the next combined third of an inning, collectively allowing one hit and three unearned runs after facing just seven batters.

Engle came in to close the game during the last inning and a third, striking out one Husky and allowing just one hit and one earned run.

Illinois returned to the field Monday for its second game against Northeastern, but this time the Illini didn’t walk away with the win.

The Paws bulldozed over the Illini after jumping to a 7-0 lead during the first five frames and suffocated Illinois’ offense after Sean Mellen threw seven hitless innings for Northeastern.

Illinois registered a single run in the ninth inning and recorded just six hits across the last two innings. Northeastern logged 13 hits total on the day.

Senior right-handed pitcher Quinn Snarskis began on the mound for Illinois, but consequently earned his first loss of the year. Snarskis threw for four and one-third innings and allowed 10 hits and five earned runs, striking out two.

Fellow senior righty Quinten Sefcik came in for Snarskis for an inning and two-thirds but allowed three hits and two earned runs with three walks during his stint.

But then Schmitt took the mound for a single inning and silenced three Paws batters and struck out one.

Lavender closed out Illinois’ final meeting after striking out all three of the batters he saw.

Illinois moves to 7-3 on the season after its two-game losing streak.