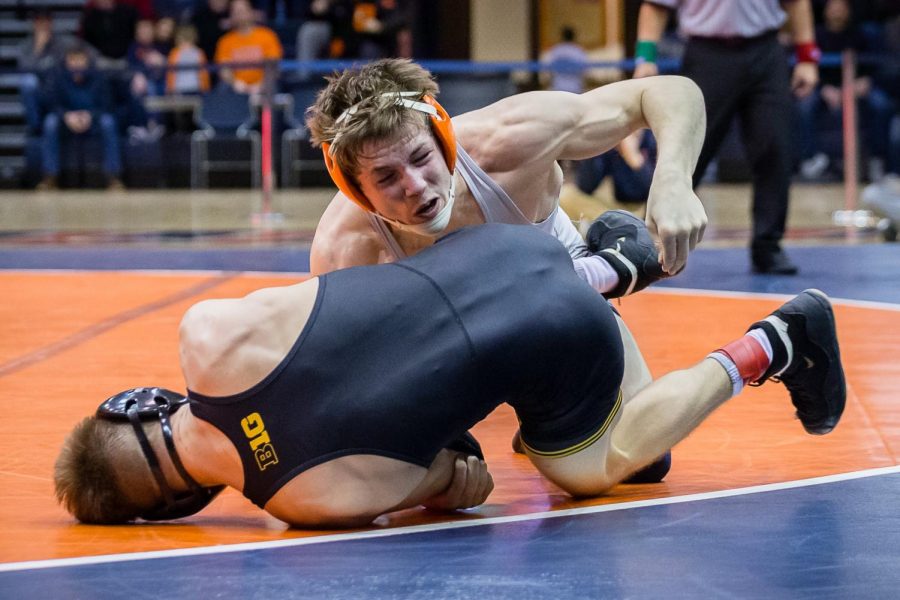 Illinois’ Mike Carr wrestles with Iowa’s Max Murin in the 141-pound match at Huff Hall on Jan. 25. The Illini lost 31-8.

The Illini wrestling team (2-9) will head to Minneapolis to compete in the Big Ten Championships this weekend.

This will be Illinois’ first action in almost three weeks after dropping its last dual meet to No. 1 Penn State and it will be its first tournament action since the Midlands Championships in late December.

Heading into this weekend, seven Illini wrestlers are ranked in the Big Ten Tournament pre-seeds. Mike Carr leads the Illini, ranked No. 1 at the 141-pound weight class. Following that, Emery Parker is No. 4 at 184 pounds, Travis Piotrowski is No. 5 at 125 pounds and Dylan Duncan and Eric Barone are No. 8 at 133 pounds and 157 pounds, respectively. To finish out, Joey Gunther is No. 9 at 165 pounds and Carver James is No. 11 at 174 pounds.

“It’s nice to be the one seed but that really doesn’t mean anything here,” Carr said. “It’s like a miniature NCAA championship; every match I’ve had with the top six guys have been very close matches. In those matches, either of us could’ve won.”

Carr placed runner-up in the Big Ten Championships last season and has built on to that success throughout this year. Carr is 11-2 overall and 7-0 against Big Ten wrestlers but missed the last two dual meets because of an illness.

The focus at practice for the team has been sharpening skills they already have rather than learning new techniques. There was also an emphasis on getting the wrestlers healthy, given the Illini were missing multiple wrestlers in their last two meets.

“Guys are getting healthier by the day,” said head coach Jim Heffernan. “The big thing is that I think they are all mentally fresh. That matters the most.”

The Illini look to show up big this weekend, not only for success in the Big Ten tournament but for a chance to compete at the NCAA tournament in Pittsburgh from March 21-23.

The Big Ten conference has allocated the most guaranteed qualifying spots for the NCAA tournament, so plenty of opportunities present itself for the Illini to be well represented.

Illini star redshirt senior Emery Parker will look to make his final run at a national championship starting this weekend.

Parker has placed fifth in both of his appearances in the Big Ten Tournament his redshirt sophomore and junior years. Last year, he came close to his goal but placed finished third in the NCAA tournament.

Parker went 14-2 this season, losing matchups to Taylor Venz of Nebraska and Miles Martin of Ohio state. Both of those wrestlers are seeded above him in the tournament, so Parker looks to get his even the series in the tournament if he gets the opportunity.

Heffernan looks for his team to come out strong and compete this weekend.

“This is why we went through the last 16 weeks and the miserable schedule we did,” Heffernan said. “This time of year, what matters most is what motivates them. Sometimes it’s parents, girlfriends, friends, family, ego or pride. Whatever motivates them, that’s what they have to start drawing on.”