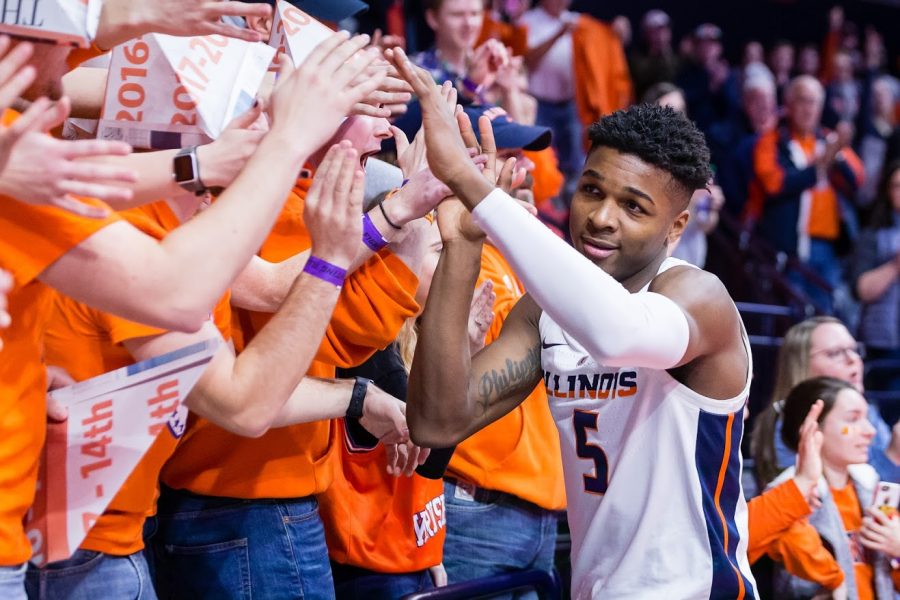 Illinois guard Tevian Jones high-fives members of the Orange Krush student section during the game against Rutgers at the State Farm Center on Feb. 9. The Illini won in overtime, 99-94.

Averaging 20.5 points and nine rebounds per game as a senior at Culver City in California, Jones expected his offensive prowess to translate to the high-major level. He also expected to start.

Instead, with his first year at Illinois nearly complete, Jones is putting up a modest 3.5 points per game in an average of 9:20 minutes on the court.

It’s a far cry from where he expected to be at this point, but Jones believes he has progressed significantly since joining the Illini.

“Early on, it was a little bit harder,” Jones said. “I feel like now it’s clicked.”

For a significant chunk of the season, it looked as if Jones would potentially fail to earn the trust of the staff and carve out a place for himself on this team.

Head coach Brad Underwood would regularly praise aspects of his game, like his athleticism and ability to score, but other things were holding him back. He had a knack for picking up quick fouls and missing defensive assignments at times. Then, he was suspended for a quarter of the season due to a violation of team rules.

Just as Jones was integrating into the team and Illinois was struggling to find its identity, he had to sit out eight games, from Nov. 27 at Notre Dame to Jan. 3 at Indiana.

It was a tough time for an 18-year-old 1,400 miles removed from his hometown of Chandler, Arizona, without a firmly established support system in Champaign. But Jones trekked on, putting his head down and hitting the gym harder.

“I’m a very persistent person. I don’t give up easily,” Jones said. “Going through that little suspension, I made a mistake. So I told myself, ‘OK, I made this mistake. This is a minor setback. With the hard work that I’m going to put in the gym, me coming back, it’s going to be crazy. I’m not going to be the same.’ With that mentality, with that mindset, that really helped me get through that period of adversity.”

Jones has played every game since completing his eight-game suspension, during which Illinois went 2-6. He returned in a Jan. 6 loss at Northwestern, turning in an inconspicuous four-minute, one foul, one turnover appearance in a two-point loss.

Underwood was glad to have Jones back in the rotation but noted he still has a lot of improvement ahead of him.

“I don’t know if (he has) a nervous energy,” Underwood said. “I think that he’s trying to play really hard. It’s just comfort. The speed of the game, mentally, has to slow down for him.”

That was just days before Jones’ statement game.

Illinois traveled to Madison Square Garden on Jan. 26 to take on then-No. 13 Maryland, and it was at that famed venue where Jones found his first real success with this Illini team.  In a season-high 23 minutes, Jones exploded for 18 points on 6-of-12 (4-of-9 3FG) shooting with four rebounds and two steals, and Illinois beat a ranked opponent for the first time since 2016.

A triumphant Underwood reflected on his belief in the young player’s breakthrough.

“It was just a matter of time,” Underwood said. “I didn’t know when it was going to come. (The Maryland game) happened to be a great day in a great venue against one of the best teams in the country.”

When asked about whether he had doubted he would be able to contribute to the team this season, Jones said he didn’t.

But for a short time during his suspension, Jones said he did wonder if he had made the right decision in leaving his family back in Arizona to come to Illinois, as he had offers to play at Arizona and nearby California.

“It kind of showed on the court and during practice,” Jones said. “A few of the players and coaches kind of picked up on that and saw it. They talked to me, pulled me to the side and talked to me.”

He said what had drawn him to Illinois most was the close relationships between those on the staff and on the team and how they were establishing a family-like atmosphere.

“They just told me to keep my head up, don’t give up,” Jones said. “That really helped me, being able to see that and recognize that.”

That backing from his teammates and the staff helped reaffirm Jones’ commitment to the Illini, mentally as a young player in his first season and within the program’s big picture. He struggled but fought through it and in the process started putting together a support system of teammates who Jones now calls his brothers.

Though Jones has yet to replicate his Garden antics, he has played seven or more minutes in all but three games since.

He had mild success at Minnesota in the game after, scoring 10 points on 3-of-9 shooting and adding three rebounds in 20 minutes. He added seven points and some energy in a loss at Purdue on Feb. 27, playing 16 minutes and shooting 3-of-7 (1-of-4 3FG).

Jones isn’t trying to push it. He knows game situations and matchups vary, and he’s working on waiting for his moments to impact the game rather than pressing the issue.

Regardless of whether he can put together another game like his outing against Maryland, Jones feels he is an asset to Illinois when he steps on the court. His goal is the same as anyone else’s on the team: Help it win.

“Whether that’s on the offensive end, grabbing the offensive rebounds to keep the play alive or hit an open shot, driving it to the rim,” Jones said. “On the defensive end, blocking a shot, sliding over to take a charge. You know, just doing whatever it takes to make that winning play I’m capable of making.”

Underwood, for his part, loves Jones’ confidence shooting the ball. He said he credits Jones for not being hesitant to launch open shots, but he also thinks the 6-foot-7-inch winger has a variety to his game which makes him tough to defend.

Underwood said he has not truly gotten into good for yet, which would bode well for Illinois down the road as the team looks to improve its production from the wing position.

“He’s got another level of his game,” Underwood said. “He’s got a great shot fake and a little floater and pull-up. He’s a very gifted offensive player. He’s got some freedoms with that.”

A .397 (.270 3FG) shooting clip isn’t going to blow anyone away, but Underwood likes the fact Jones will get shots off when he feels the time is right. Sure, more of Jones’ shots have dropped in practice than in games, but Underwood thinks it will carry over in time.

“He definitely likes to shoot it. It’s what he does,” Underwood said. “He’s comfortable. There’s not a lot of guys who do that (as freshmen), who come in and instantly feel it and have the confidence to do that. Yet, he’s very good at it. When Tev is on balance, he’s shooting it. He’s got such a quick release, that thing looks great coming off his hand. He’s one of those guys that every time he shoots it, you think he’s going to make it.”

Since Jones has returned to game action with Illinois, the team has gone 7-8, following its 4-10 record when his suspension began. Jones has not and will not try to take credit for his team’s improvement, but it seems Jones’ redemption has come as many of his teammates have also begun to play better.

Fellow freshmen Ayo Dosunmu has scored in double figures in nine of last 11 games,  Alan Griffin (3.1 points per game in 8:12 minutes on average) has made more consistent contributions of late, and junior college transfer Andres Feliz scored a career-high 26 points Sunday against Northwestern.

After a mostly rough first year with his teammates, success in the latter part of the season is validating for Jones and the Illini.

“It’s a good feeling because early in the season we were struggling,” Jones said. “For us to be able to pick it back up in such a big way, that’s a good feeling. All of us in the locker room and all the coaches, we’re all humble and we’re all going to remain humble. We’re all just going to keep working and keep grinding for that success.”

At the end of the day, no matter what happens from now until the end of the season, Jones knows this campaign is only his first at the collegiate level. There is much to do before he can sniff his dream of playing in the NBA, and there are many areas of his game to improve upon. The 205-pound wing admits he has to get a lot better, particularly on defense, where he has at times missed assignments and been made to pay.

He expects to hit the weight room hard this offseason, too. A few more pounds of muscle may go a long way toward finding success against physical Big Ten ballers.

“I really need to work on getting my body right, getting stronger physically,” Jones said. “Also knowing the speed of the game and the mental side of the game, with the plays and things like that.”

Jones also noted he needs to get better at creating his own shot opportunities and burying them when he sees chances on the offensive end.

Through nearly 30 games and with his freshman year nearly over, Jones feels like Illinois is an environment where he can grow as a person and prospect. At the end of the day, that’s what he’s looking for.

“I really feel like the coaches are going to play a big part in that,” he said. “They’ll develop me to be ready for the next level. This league, too, with all the great teams and great players that are on the teams. Just for myself, staying in the gym and knowing that all this hard work will pay off.”