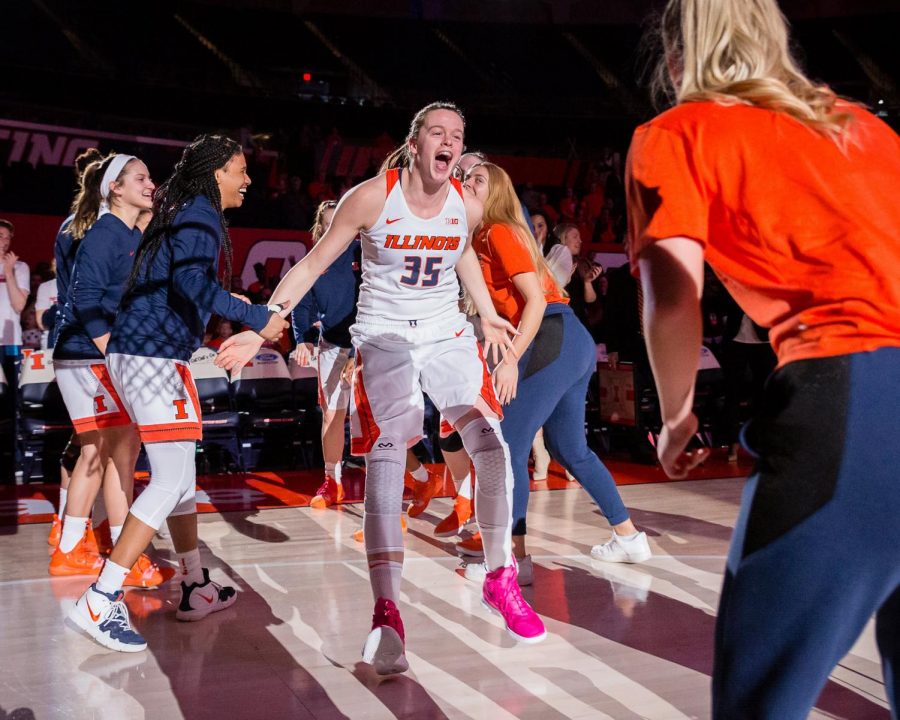 Illinois forward Alex Wittinger high-fives her teammates as she is announced for the starting lineup before the game against Penn State at the State Farm Center on Feb. 24. The Illini lost 76-65.

Following its first-round loss in the Big Ten tournament, the Illinois women’s basketball team finished the season with a 10-20 record including a 2-16 conference record.

Another last place finish isn’t what the Illini looked to accomplish during the second season under head coach Nancy Fahey, but there were marked improvements compared to her inaugural season.

“Last year, we were just trying to get our feet settled and get started. Now we have an expectation, we’re competing and we want to go out to win, so when we fall short it’s hurting more,” Fahey said.

After losing every conference game last season, Illinois scored dramatic victories over Minnesota and Wisconsin this season, showing the incremental progress the team is making.

“When you start losing is when you stop trying,” Fahey said. “I know we’ve been beat, but we’re not losing; (those are) two different things. So for us, when you’re in the process of trying to change (the culture), that’s your next day’s focus. Eventually, if you keep doing that, the scoreboard takes care of itself.”

After starting the season 8-3 against nonconference opponents, the Illini struggled against other talented rosters in the conference. With players like Nebraska guard Taylor Kissinger shooting 46 percent from beyond the arc to Iowa’s Megan Gustafson averaging nearly 30 points per game and rebounds, it’s tough to ask for any team to win consistently.

“We keep knowing that we’re getting better everyday, and we know we’re competitive in games, but we want to win,” Fahey said.

During the first 11 games of the season, Illinois averaged 76 points per game, including its highest-scoring game (107) in a loss to Sacramento State. However, once conference play began, the team only averaged 63 points per game, showing the wide gap in production the Big Ten has compared to the rest of the nation. Nonetheless, the Illini finished eighth in the Big Ten in scoring offense, averaging 67.8 points per game.

The bigger concern seemed to be the scoring defense, a category where the Illini finished dead last in the Big Ten, allowing 70.7 points per game. In turn, this also meant Illinois finished last in the scoring margins category and second to last in field goal percent defense.

With the tallest Illini being only 6 feet 3 inches tall, it was easy for the bigger players in the conference to take advantage of the team’s lack of size down low. Without a towering player monitoring the paint, the team also struggled to rebound consistently, finishing second to last in both offensive and defensive rebounds per game.

It wasn’t all thorns throughout the season though. The Illini had the third most three-point shots made in the Big Ten as well as the fifth most blocks per game in the conference.

The two most reliable contributors throughout the season were second-team All-Big Ten honoree Alex Wittinger and junior guard Brandi Beasley.

Wittinger became the school’s all-time leader in blocked shots but also showed her skills on offense as well. She finished the season averaging 14.7 points per game, which ranked ninth in the Big Ten among all scorers. Wittinger also finished eighth in rebounding, fourth in blocked shots and fifth in field goal percentage.

Her well-rounded abilities as a player could garner plenty of attention from scouts in the WNBA and overseas. Wittinger has mentioned her interest in continuing to play basketball after she graduates from Illinois and hopes to play in Europe if the WNBA doesn’t work out.

While the team will have to figure out how to replace the consistent offense Wittinger produced night in and night out, Beasley, the team’s best facilitator, will return for her senior season in Champaign. Beasley dished out a career-high 146 assists, good for the eighth most assists in a single season by a player in school history.

The offseason comes a wave of unfettered hope for what could be next season, and the Illini have no reason to believe those hopes can’t come true. With leaders like Beasley returning, as well as young talents like freshmen Ariel Scott and Mackenzie Blazek, the team has a young core to build on.

Scott finished first on the team and eighth in the Big Ten in three-pointers made while Blazek showed continual signs of improvement each time she was on the floor. In the team’s final game, Blazek showed out and helped ease worries about Wittinger’s departure by scoring a career-high 15 points with her post game and added six rebounds.

With Big Ten postseason cut short and no tournament bid headed their way, the Illini will now look toward another extended offseason under Fahey to figure out where the program lies.