2018 starters compete for a spot in NFL 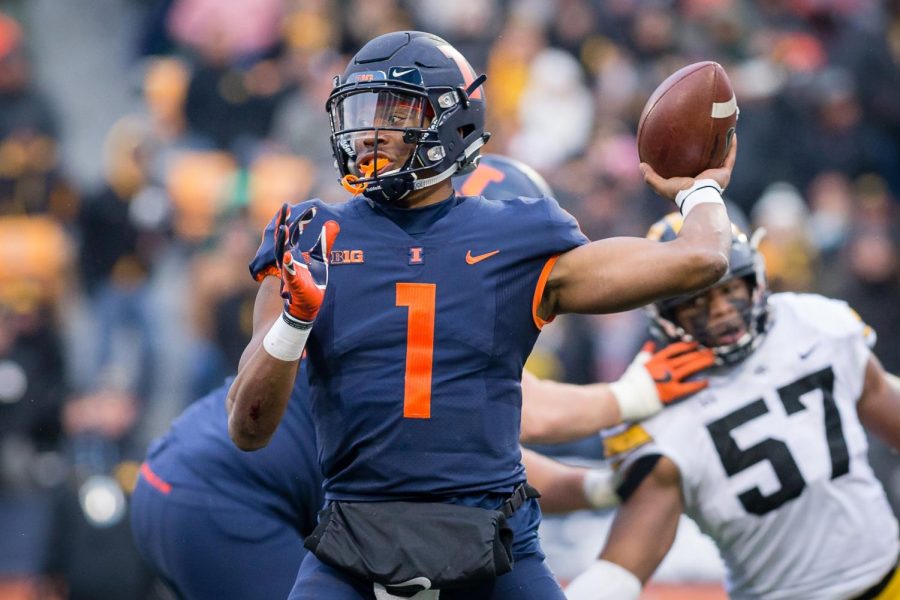 Illinois quarterback AJ Bush (1) passes the ball during the game against Iowa at Memorial Stadium on Saturday, Nov. 17, 2018.

Illinois’ grad-transfer quarterback finished off an up-and-down year when the season came to a close in November. With a load of freshman quarterbacks coming in for the Illini coaching staff, Bush quickly took control of the offense during summer training camp. He played 10 games on the season with nine starts, missing two games due to injury. Known for his running abilities, he finished the year with the third-most rushing yards by a quarterback in a season. His 733 total yards were second on the team.

A staple of the Illini offense for the past four years, he was a team captain for the 2017 and 2018 season, strongly viewed as a leader on and off the field. He was a reliable front line presence, starting the last 36 games of his career. Heading into his final season with the team, Allegretti was listed as the No. 3 rated guard in the nation and No. 2 in the Big Ten by Pro Football Focus. His work off the field gave him numerous accolades, including finishing as a semi-finalist for the Jason Witten Collegiate Man of the Year Award and a Wuerffel Trophy nominee.

The senior kicker surprised the conference this season when he firmly took home the Big Ten kicker of the year award. After having a rather lackluster junior campaign, going just 12-17 on field goals, McLaughlin got his fair share of work during his senior season. He went 20-25 on field goals and an impressive 36-36 on extra points. He was the first kicker in Illinois history to hit a 50-plus yard field goal in three-straight games and recorded four on the season.

Phillips was one of the most threatening forces on the defense since he came to the University from the junior college circuit in 2017. He was the only senior on the defense and voted the team’s defensive captain last season. His performance at the linebacker position earned him an All-Big Ten honorable mention. Phillips led the team in turnovers with four and tied for the lead in tackles with 95 on the season.

Sam Mays started all 12 games for the Illini at wide receiver last season. Despite only going for 29 receptions with 331 yards on the year, the senior finished second on the team in receiving yards and third in receptions. After debating leaving the program after his junior season, Mays stuck with it and quickly became a consistent veteran presence in a receiving core that was filled with underclassmen.