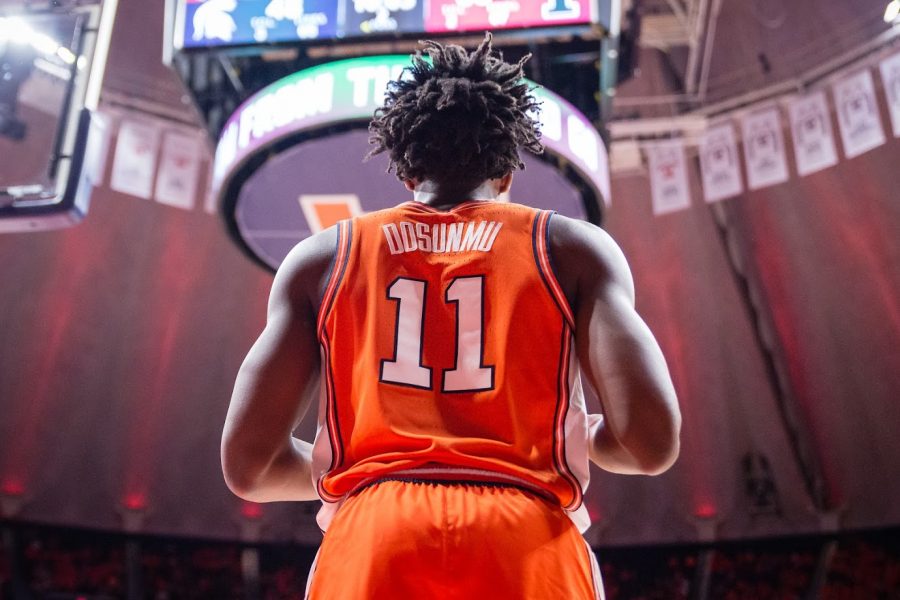 Illinois guard Ayo Dosunmu waits to throw the ball in during the game against Michigan State at the State Farm Center on Feb. 5. The Illini won 79-74.

Freshman guard Ayo Dosunmu came to Illinois with a full stream of hype behind him.

As a star at Morgan Park and for the Mac Irvin Fire, Dosunmu drew a lot of fanfare when he decided to take his talents to Champaign.

On Monday, that hype was validated as Dosunmu was named to the Big Ten All-Freshman team.

The Chicago product is the eighth Illini freshman to be named to the team. It is now the second year in a row Illinois has had a player earn the honor  after Trent Frazier did so last year.

Dosunmu’s body of work this season speaks for itself.

He leads Illinois in scoring with 14.1 points per game, and he entered Wednesday’s contest against Northwestern as the Big Ten’s third-highest freshman scorer and No. 16 in the conference.

Barring uncharacteristic scoring from him or sophomore guard Trent Frazier, Dosunmu should finish as the first-ever freshman to lead Illinois in scoring at the end of a season.

Dosunmu has made his presence known since the beginning of the year — he exploded for 25 points on Nov. 13 against Georgetown, knocking down 9-of-15 shots and 3-of-4 from behind the arc.

Head coach Brad Underwood praised Dosunmu when speaking about him and fellow freshman Giorgi Bezhanishvili earlier this season, highlighting each player’s quick development in the program.

“They were at a different place (in) maturity level than a lot (of freshmen),” Underwood said. “It speaks volumes about their character, (and) how mature they are.”

Dosunmu, looks back on his personal output for the year with, mostly satisfaction.

The 6-foot-5-inch guard has never shied away from honest assessments of both his and the team’s performances, and he acknowledged positives and negatives about his debut campaign.

“I feel like I had ups and downs my freshman year, of course,” Dosunmu said on Monday. “But one thing I like about myself is I always stay level-headed. I never got too high. I never got too low.”

Down the stretch in Big Ten play, Dosunmu has become even more reliable.

Dosunmu is averaging 14.8 points per game in conference, second among freshman to Indiana’s Romeo Langford, and has the 10th-best scoring mark among all players.

He has scored in double digits in nine of the team’s last 10 games, with the only exception coming in a road loss at Purdue on Feb. 27, when Dosunmu put up nine points.

In the Illini’s hallmark win over then-No. 9 Michigan State on Feb. 5, Dosunmu broke out for a game-high 24 points.

In perhaps the most crucial moments of the game, Dosunmu hit two deep 3-pointers to help seal the win, sending the State Farm Center crowd into a frenzy with each make.

Though Dosunmu has attracted significant draft buzz and is rated as high as a fringe first-rounder by some outlets (No. 34 according to The Athletic), he has held off on addressing his future.

Dosunmu has been the single biggest contributor for Illinois for much of the year even as a freshman, scoring in double figures 22 times and surpassing 20 points in seven different games.

The Morgan Park grad has also been pivotal on defense during stretches, averaging 1.3 steals per game and often providing opponents with their toughest defensive matchups.

Underwood has rarely  not praised Dosunmu, as a player and as a person throughout the year.

Like Dosunmu, he hasn’t provided any real insight into whether he will elect to stay another year or leap for the NBA draft when the season is over. But he admits both Dosunmu’s and Bezhanishvili’s contributions to his team have been abnormal for such young players.

“(Dosunmu’s and Bezhanishvili’s) impact on our program for this season and the future is huge,” Underwood said. “To see two young guys (who) have gone through real struggles, real struggles, and I’m talking this year, keep persevering and keep positive. They’re not dealing with normal freshmen stuff because of the stage they’ve been put on and the platform they’ve been put on. They’ve done nothing but exceed every expectation that I had for both of them.”

Underwood’s trust in Dosunmu has shown itself on many occasions throughout the season, as the freshman has frequently been the player to handle the ball on crucial possessions and leads the team in playing time  with 31.1 minutes per game.

As a result, Dosunmu feels he has grown as a player and as a leader.

“I really don’t consider myself a freshman anymore because I feel like I’ve played enough games, got enough experience in this,” Dosunmu said.

Whether Illinois makes a Big Ten Tournament run, dips out in the opener against Northwestern or finishes somewhere in between, Dosunmu has the serious option of turning pro and foregoing a sophomore year at Illinois.

As he has insisted for much of the year, though, since draft buzz really took off in January, Dosunmu is focused on the present.

“Really, I’m just trying to go out with a bang the best way I can,” Dosunmu said. “Fighting hard and competing each day.”