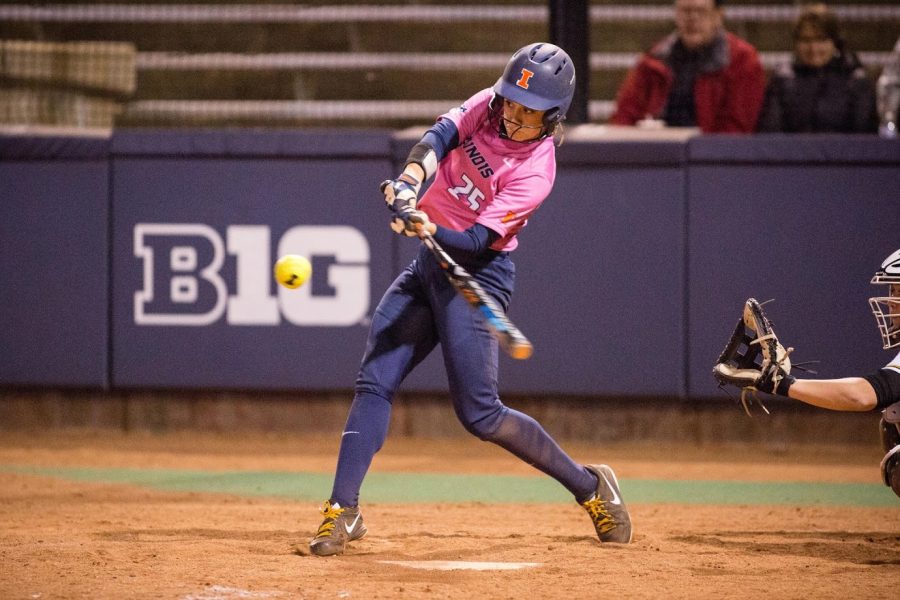 Illinois outfielder Carly Thomas hits the ball during the game against Iowa at Eichelberger Field on April 21. The Illini won 6-5.

Nothing can mark the passage of time or a game’s evolution more than when a long-held record gets shattered by the newest hero of the game. Whether it’s the now-infamous (and highly debated) shattering of the late Yankee Roger Maris’ 61 home runs in the MLB or, more recently, LeBron James surpassing Michael Jordan to become the NBA’s fourth-ranked all-time points leader, record-breaking performances have the habit of dominating news coverage.

For professional athletes especially, comparison and legacy are woven into the records they break — or fail to break.

But when Illinois senior left fielder Carly Thomas stepped up to the plate on a chilly Friday in Tulsa, Oklahoma, a 15-year-old record was the last thing on her mind.

“Honestly, I didn’t even know I was about to break the record. Somebody had told me that I think about a week before, and I wasn’t aware when it happened,” Thomas said. “So that was pretty cool to get to find that out after.”

Thomas would hit her 53rd double this season and is now up to 54 in her career.

Over a decade ago, Illinois alumna Erin Montgomery established herself as the leading slugger in the young program’s history. At the time of her graduation in 2004, Montgomery held the career home run and doubles records and was second in career triples. Her home run record would stand until 2006, when Jenna Hall took 33 round trips that season.

Montgomery’s doubles record of 52 would remain untouched for the next 15 years and during those years, Illinois softball experienced its fair share of changes. After Thomas’ freshman season, longtime head coach Terri Sullivan retired and was replaced by current head coach, Tyra Perry. Thomas herself then suffered a season-ending injury in 2017 but returned the following season to start all 55 games.

Among her teammates, Thomas has garnered a reputation for being a serious and focused competitor —  something greatly appreciated by senior center fielder Kiana Sherlund.

“Carly has a really high softball IQ,” Sherlund said. “She is always analyzing things and thinking. Whether it (is) at the plate about the opposing defense or a pitcher or where to stand in the box or (on) defense of where these hitters hit the ball last time and what kind of spin our pitchers are putting on the ball that might make the ball come to whatever fielder, she’s always thinking about that kind of stuff, which makes her super prepared for any situation that comes at her.”

Getting to perform at such a high level like Thomas takes a great deal of effort from not only the athlete but from the coaching staff as well. After all, gaining a “high softball IQ” doesn’t happen overnight.

Thomas’ development as an individual player and as a teammate is an evolution witnessed not only by her fellow student-athletes but also by Perry, who remembers a somewhat different Thomas from when she first began her coaching position at Illinois.

“Carly has matured in so many ways,” Perry said. “When we first got there, she was kind of cocky and kind of did her own thing, and I think now she’s evolved into a team player, somebody (who’s) a leader. She’s definitely super coachable, super likable. We really enjoy having Carly on the team.”

As the season continues, Thomas and her teammates still have a fair amount of softball left to play. Thomas has  the opportunity to further stretch her doubles record before graduating in May.

Perhaps more important than a record is the team goal Thomas has for her final year in the orange and blue.

“I want a Big Ten championship,” Thomas said. “And I definitely think it’s within our ability to do that.”