Illini pull out win against Panthers 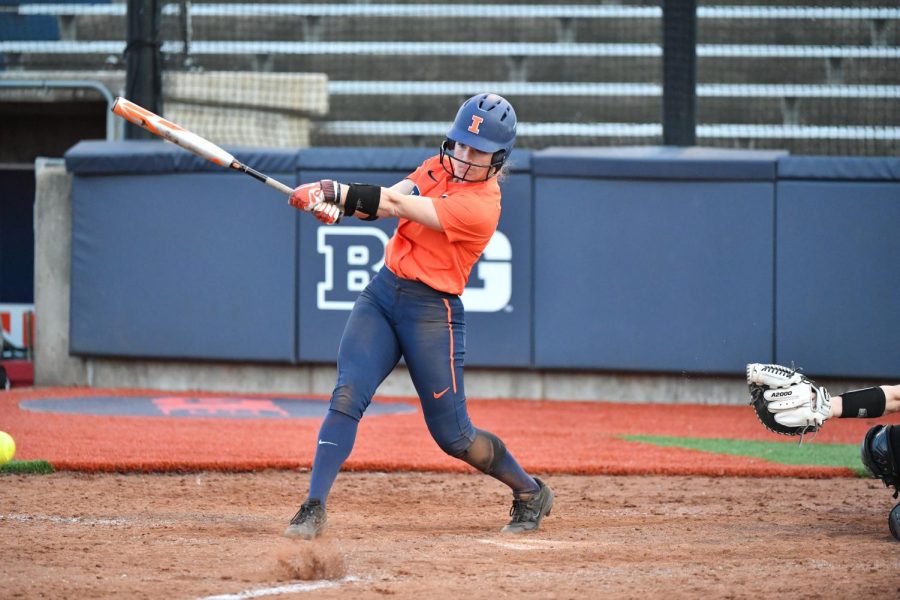 Senior Annie Fleming swings at a pitch during Illinois’ three-game home series against Wisconsin last weekend at Eichelberger Field. The Illini are on a three-game win streak after beating Eastern Illinois University at home Tuesday night, 8-7.

In its final game of a seven-game homestand, the Illinois softball team beat Eastern Illinois University 8-7 in extra innings to improve to a 21-7 record. The victory came two days after the Illini won their first Big Ten series of the season against the Wisconsin Badgers on another one-run decision.

The Illini victory was secured by senior Annie Fleming in the bottom of the eighth after Carly Thomas and Kiana Sherlund rallied on two outs to hit a double and single, respectively.

With two runners on and two outs, Fleming showed no sign of nervousness and grounded to the third baseman who bobbled the ball, allowing Thomas to score.

“My process and approach was pretty much the same as my other at-bats. Nothing really changed,” Fleming said. “(Hannah Cravens) had been throwing the lefties a lot (inside), so I just backed off the plate and was looking for that pitch. Not the best hit of my life, but (it) got the job done.”

Both teams came out strong to start the game, each recording a run in the first inning. Eastern Illinois struck first as lead-off hitter Megan Burton hit a double then promptly stole third to get in scoring position. Burton tagged on a fly ball to give the Panthers the early 1-0 lead.

Illinois returned the favor when Thomas, started things off with a line drive, and then stole second. After a groundout by Sherlund, Fleming made a well-placed bunt to score Thomas and tie the game 1-1.

After only pitching one inning during the Wisconsin series, senior Emily Oestreich earned the start and held the defense strong, only allowing one run through the next four innings.

“Based on last year, we know what Emily can do,” said head coach Tyra Perry. “She’s been working on a couple things and has been working closely with (assistant) coach Lance (McMahon). We believe we’re better with Emily in stride, so we’re working with her through the mid weeks to try and get her confidence up and get the new things implemented so she can be a complete pitcher.”

Despite Oestreich’s performance, the Illini’s offense struggled to get back in rhythm and was held scoreless through the next three innings. However, the Illini hit their stride in the fifth inning, tallying five runs.

Freshman Avrey Steiner started things off in the fifth with a single to left field and was advanced to second off a line drive from Thomas. A wild pitch set up Steiner and Thomas in scoring position.

Sherlund and Fleming hit back-to-back RBI doubles to score both Steiner and Thomas, gaining the 3-2 lead with no outs. Sophomore Bella Loya came up with an RBI double of her own to advance Fleming. RBIs from freshman Kailee Powell and senior Stephanie Abello accounted for the next two runs, giving the Illini a 6-2 lead.

Despite the strong offensive inning, Illinois’ defense started to let up in the top of the sixth, giving up five runs on three errors. Eastern Illinois gained the 7-6 lead back by hitting three-straight singles followed by three-straight doubles.

“I know that they have my back, and I want to have their back,” Oestreich said. “Whenever I see them struggling a little, I want to come back and throw my best pitches because I know sometimes when I’m struggling, I hope they can be there to support me.”

Following the tough inning on defense, the Illini were able to come up with the tie on an RBI double from Thomas. However, the seventh inning remained scoreless from both teams, forcing extra innings.

After coming in for Oestreich, freshman Sydney Sickels earned the win with a three-and-out performance in the top of the eighth to set up the Illini’s offense for the win.

Now on a three-game win streak, Illinois will head back on the road to face Nebraska in another Big Ten series starting Friday.