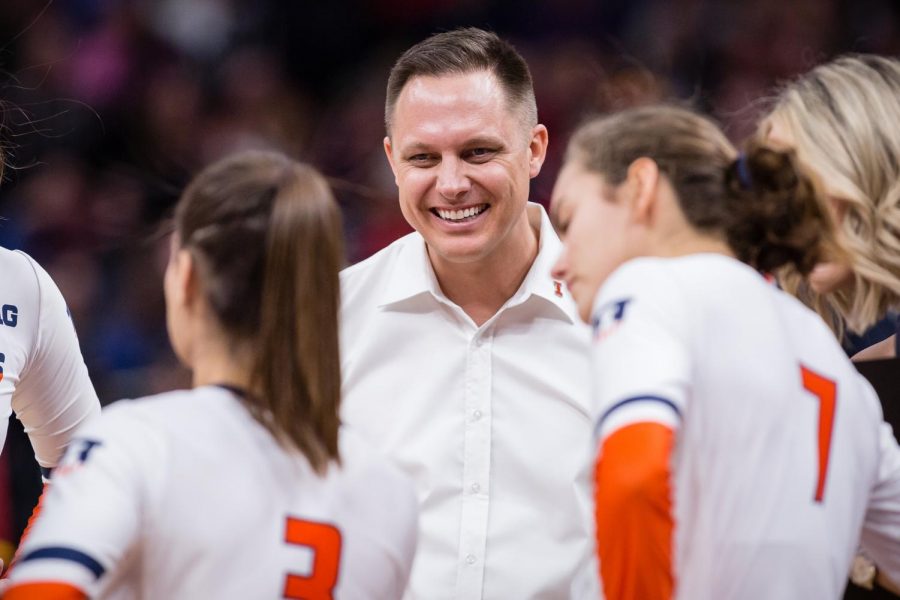 Illinois head coach Chris Tamas smiles during a timeout in the match against Nebraska in the Final Four of the NCAA tournament at the Target Center on Dec. 13. Nebraska defeated Illinois 3-2. Several players on the team will be going abroad to join the U.S. national team.

Back in the fall, all eyes were on Illinois volleyball as the team hosted and won an NCAA regional tournament and advanced (all the way to the NCAA Final Four.)

According to the team, the NCAA semifinal game was a monumental moment on a monumental stage, but three current Illini will soon be trading their NCAA spotlights for competition on an international scale.

This summer, junior Jacqueline Quade, sophomore transfer Mica Allison and freshman Diana Brown will all be adding stamps to their passports as they compete abroad as members of the USA Volleyball Collegiate National teams. Quade and Allison are slated to join USA Volleyball’s Japan Tour, while Brown will travel to Napoli, Italy, to compete in the World University Games. Competing this summer with both teams will make all three eligible to be considered for the U.S. Women’s National Team.

The process to make both tours’ rosters involved a fair amount of travel for the Illini. Quade, Allison, Brown and sophomore Taylor Kuper spent March 1-3 in Colorado Springs, Colorado — the home of USA Volleyball’s headquarters — facing off against 200-plus athletes for spots on the Senior National or Collegiate National teams.

While the four session-long tryout schedule was familiar for some Illini, Brown admitted she wasn’t sure what to expect when she arrived.

“Going in, I had no idea what training USA volleyball is or how they do it or how intense or anything. I didn’t know anything,” Brown said. “It was just a new experience for me. I went in with an open mind, ready to learn anything, and I was going to do whatever they told me to.”

After tryouts concluded, the four Illini who were invited to Colorado waited until March 13 and March 25 to receive the rosters for their respective teams. The March 25 announcement took place over Illinois’ spring break and revealed Quade and Allison had been named to the Japan Tour.

Quade had just completed a spring training block with the U.S. Women’s National Team on Friday in Anaheim, California, and was nothing short of excited for the opportunity to represent her country this summer.

“It’s a very great honor to be able to represent the United States,” Quade said. “That’s something a lot of people dream of, so I’m definitely very grateful and humbled by this opportunity.”

For Allison, representing her country while abroad isn’t a new concept. During the summer, the Illinois native was selected to be a member of the Junior National team, where she got firsthand experience with the selection process and the competitive tension put on U.S. teams when they go abroad. She said she understood the pressure they feel as both athletes and representatives of their country.

While there’s still a couple of months before Allison and Quade depart for their 11-day tour in Japan,  Allison already has one major goal on her itinerary.

“I am excited to eat the sushi,” Allison said. “I am very excited about that.”